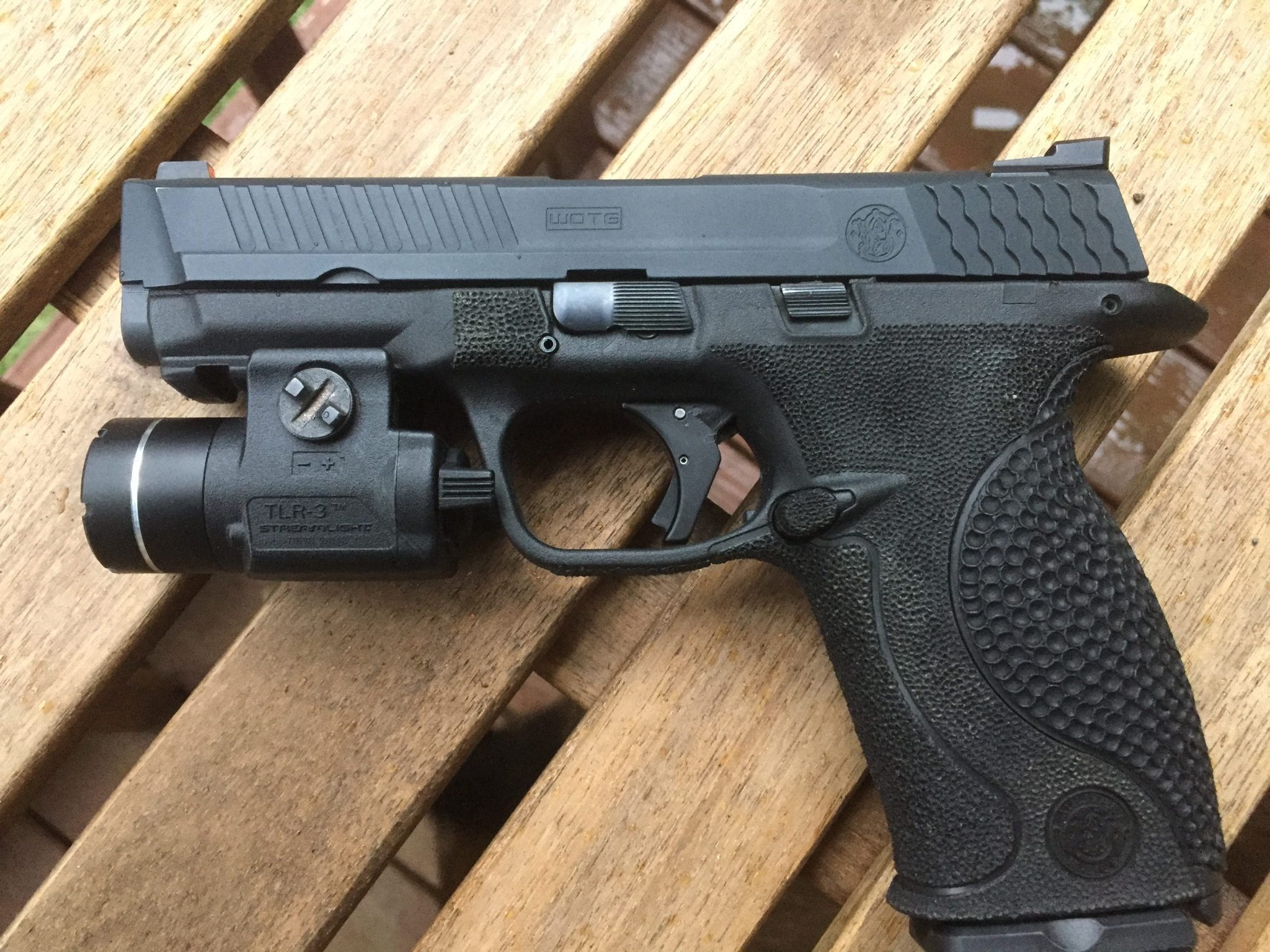 As a competitive shooter, concealed carry advocate and gun enthusiast I try to pay attention to what the pros are doing; what gear they are running and how they run it. One of my favorite guys to watch and listen to teach is Frank Proctor who owns Way Of The Gun (WOTG), a firearms training company out of Alabama that is based on Frank’s extraordinary skill set and experience. WOTG has also been expanding its web store to include gear designed by Frank and more recently custom gun work for Glock, S&W M&P and 1911 pistols.

The bottom line for WOTG gear and custom gun work is that it’s designed by Frank based on his experience to serve a functional utilitarian purpose.  His pistol modifications are intended to assist the shooter in running the gun efficiently and getting the most performance possible out of the platform, without adding a lot of unnecessary aesthetic modifications that would not enhance performance.

I have been using an M&P 9mm almost exclusively since I started shooting local USPSA and IDPA matches around the DC suburbs of Northern Virginia in early 2015. I’ve shot on average one match a month since then, easily putting a few thousand rounds through my M&P in that time. Recently I’ve been considering changing platforms competitively, and I’ve been on the fence about what to do with my trusted M&P. 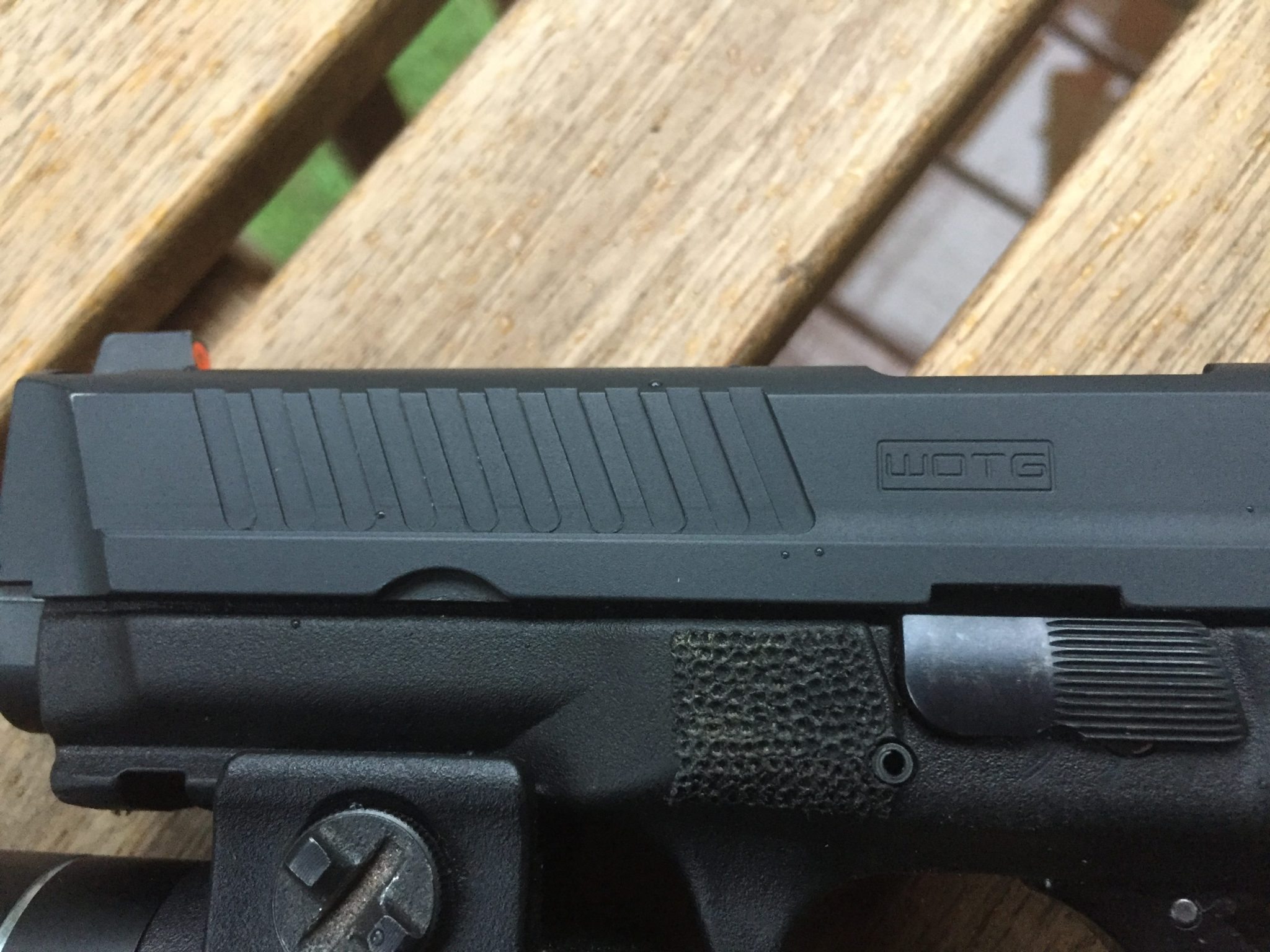 As a subscriber to Frank Proctor’s various social media outlets, I became aware of the WOTG slide modification offerings as soon as he announced them. What appealed to me personally was the utilitarian aspect and lack of excessive machining or window cuts, and his approach to just making the modifications that would enhance performance without going overboard for pure aesthetics. If you have ever watched Frank run a pistol then you will know he prefers to work the slide using the web of his hand on the front serrations between the ejection port and the muzzle, as it allows for operating the pistol more efficiently and getting back on the gun faster.

Obviously there may be times you will want or need to overhand rack the slide, but in most routine manipulations of the slide (ie. loading/reloading, locking the slide to the rear, remedial action for malfunctions) it is certainly faster to reapply a proper shooting grip after you work the slide in this way. I encourage the reader to watch some YouTube videos of Frank doing his thing….he has a fluid and practiced way of weapons manipulation that is sort of hypnotic. SuperSetCA has some excellent videos of Frank Proctor teaching specific lessons, and Way Of The Gun Performance Shooting publishes Franks personal videos as well. You can watch two of these below.

When Frank announced his Independence week sale I jumped on it, as he was (and still is at the time of this writing) offering a variety of slide work options at very competitive prices and with a very short lead time. I chose to get the standard slide manipulation cuts with WOTG logo and american flag, and a stealth grey Cerakote. Last time I checked they are now offering more Cerakote color options, and id be tempted to go with titanium if I were sending another slide.

I sent my slide to WOTG on 14 July, and had it back in my mailbox on 22 July. To me that is an outstanding lead time door to door, as you will have to wait for months to get your slide done with some of the other popular custom shops. While i was waiting for my slide work, a WOTG email subscription newsletter dropped into my inbox and lo and behold, there was a beautiful picture of my slide, all machined and Cerakoted and looking fly. A few days later it was back in my hands and ready to rock. 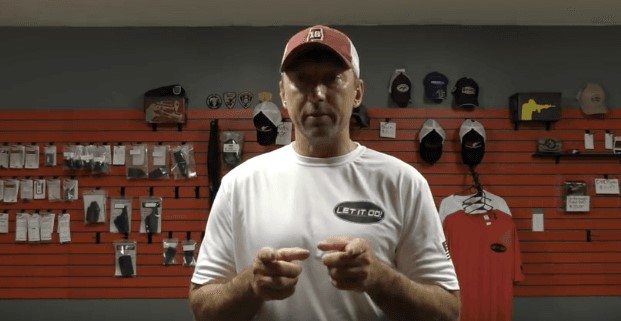 WOTG newsletter with a picture of my finished slide 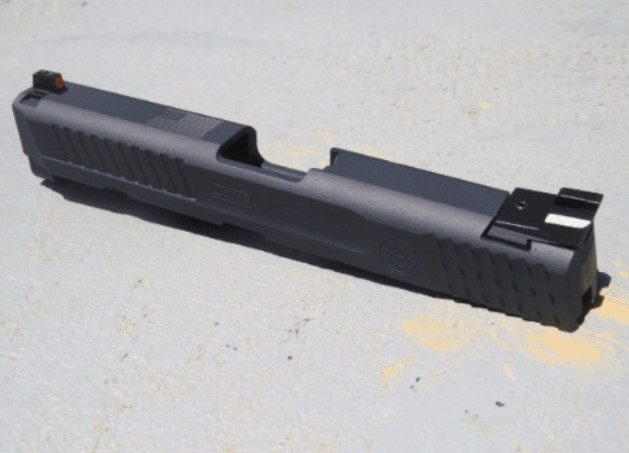 The slide not only looks really slick with the stealth gray Cerakote and the machined front end, but the slide manipulation cuts work exceptionally well in their intended role. The machining on the front end removed a thin layer of metal where the serrations are done, so you lose the factory engravings which I wasn’t very attached to anyways. I personally prefer the thinner profile and the front serrations on a handgun, as I do like to run the slide using the Proctor method whenever possible. Not everyone will agree I’m sure, but that’s how I like to do it as demonstrated here: video-sep-28-5-42-11-pm.

I ran my newly modified M&P through a USPSA match at Quantico and a 3-Gun match in Maryland, and i had no malfunctions whatsoever. Being able to easily and positively manipulate the slide with the front serrations was an added benefit that i don’t have with stock pistols like M&Ps or Glocks, where grabbing the big, blocky, smooth slide is not usually the best choice for decisive weapons manipulations, especially if your hands are sweaty and you are pushing your speed. Simply put, the slide manipulation cuts worked as advertised and give a nice custom look to a very common firearm. 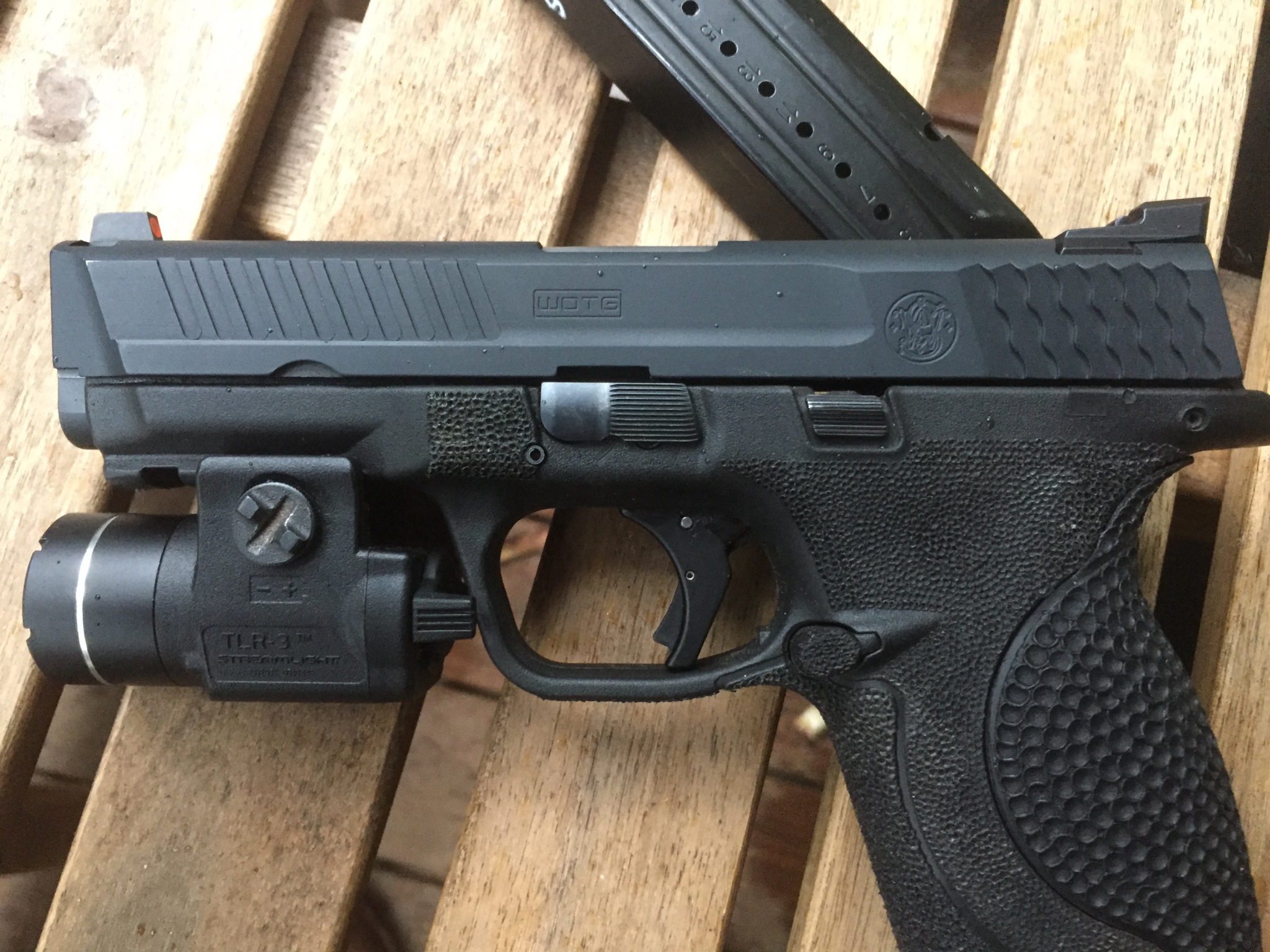 Note: Stippling was done by me. It took a couple hours total. 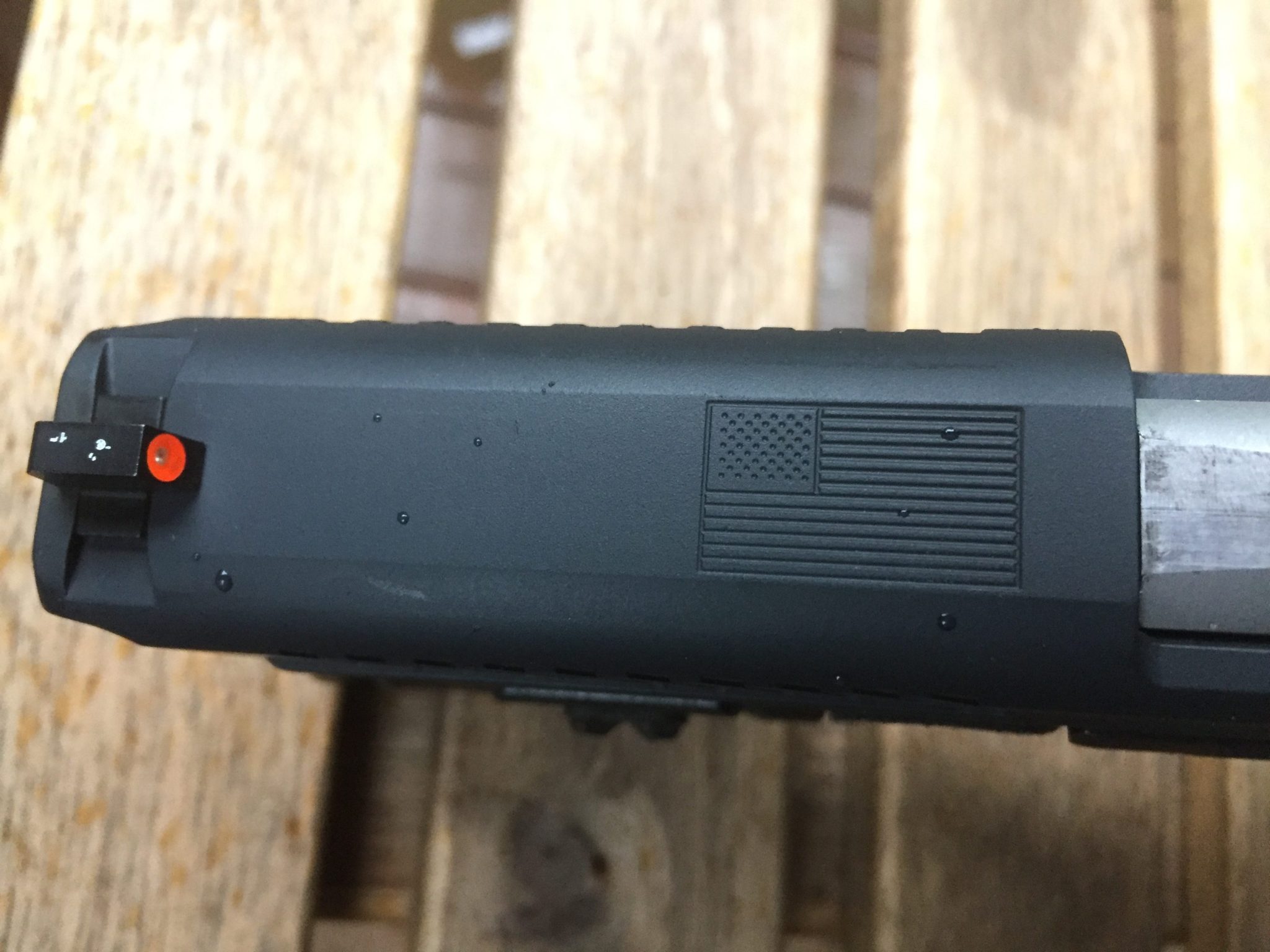 I did notice that after shooting a couple matches their does appear to be some minor finish-wear near the muzzle of the gun. Im assuming this is from bringing it in and out of the holster, but i never noticed that after hundreds of draw strokes with the factory finish. It doesn’t bother me at all, i actually think honest finish-wear from hard use looks fantastic on handguns, but its something to note as it appears the cerakote application might not be as durable as the factory finish (which may have been expected anyways). 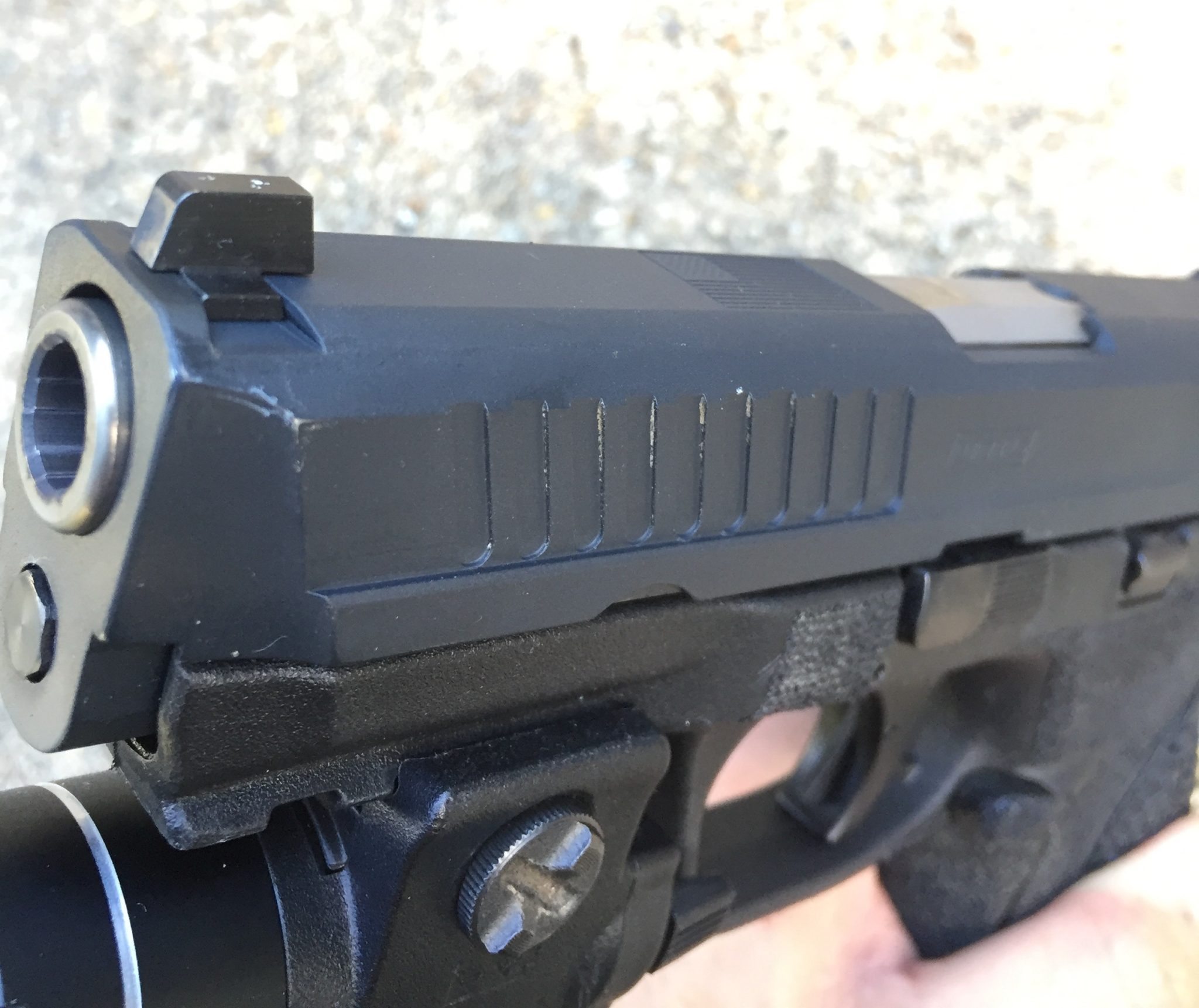 Holster-wear on the finish after two local competitions.

Overall I’m very happy with the WOTG slide work and would recommend anyone looking to modify their slide to go check out www.wayofthegun.us and explore their offerings. The prices are good, the lead times are really good, at least for now, and you can bet that if it’s coming from Frank you are getting a quality product. I will note that my M&P is no longer suitable for USPSA production class, and if I want to shoot it at USPSA matches I have to choose a different division where shooting the 9mm caliber has a scoring disadvantage. This has no bearing on 3-gun rules as far as I know, but its something I have to consider if I continue to shoot this gun competitively. For now, I’m happy enough with this handgun and the modifications I’ve done to it that I prefer to continue using it for competition, and simply working on my fundamentals and increasing my skill level without worrying too much about points or my rankings. 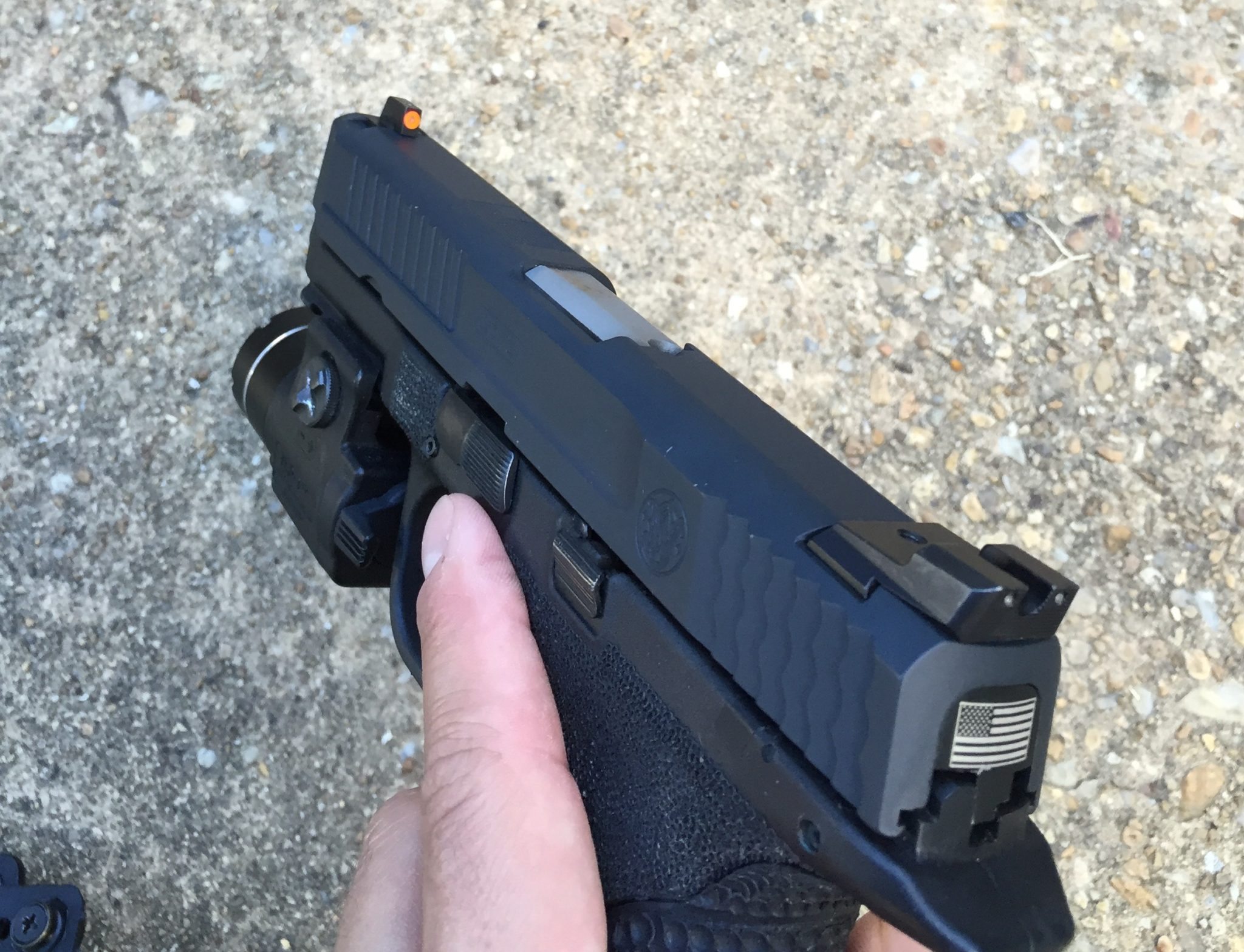