Almost hidden off exit 80 on “Alligator Alley” in Florida’s Everglades is a shooter’s haven called ALTAIR Gun Club.  I‘ve visited ALTAIR before and been surprised every time with their extensive capabilities.  I decided to take them up on their open house offer on 15 April and get the bird’s eye overview.

ALTAIR Gun Club was once a prison from 1945-2001 known as the “Alcatraz of the Everglades”.  Imagine a “Cool Hand Luke” style penal party place.  It was said prisoners escaped not to get out of the prison but to be sent to a different one.  Owners Michelle and Brian Jones purchased the dilapidated facility in 2010.  Brian shared with me the undergrowth was so thick that he needed a machete to get to the buildings and while doing so came within 30’ of a bear taller than he.  The uninterested bear walked nonchalantly off into the undergrowth; a tree was growing through the main building.

They embarked on a four month renovation and rebuilt the main building as the nerve center and shooter’s lodge.  It is surrounded by three ranges that can be further divided.  All are in super quick walking distance of the main building.  The gun lodge can house 30 shooters in the refurbished cells which are now comfortable but Spartan private rooms.  The lodge features a large classroom, pro-center, dining room, living room, kitchen and communal bathroom/ showers.  Sounds austere but having stayed there attending Sage Dynamics Vehicle Defense course last year it was very comfortable and pretty homey.

I highly recommend taking advantage of their boarding option if you visit Altair for an overnight visit/course.  The facilities promote a unique camaraderie among students attending courses and make attendance infinitely easier instead of driving 40 minutes or more to a hotel.  The food was catered, delicious and plentiful.

ALTAIR Gun Club provides some outstanding shooting and training opportunities.  It attracts some big names in the shooting community like Costa, Seeklander and Vogel.  ALTAIR also provides their own basic, intermediate and advanced shooting courses for pistol, rifle and shotgun.  I’ve taken courses at ALTAIR that offer comprehensive instruction on how to fight in around and from vehicles to shooting from a helicopter!

At ALTAIR you can take a day course of basic shooting to a week-long personal security professional certification course.  ALTAIR has it all from competition, to defensive shooting and MORE!  They also offer ladies only training and are very active in promoting and encouraging women to shoot.  Women are one of the fastest growing demographics among gun ownership.  Shirley Watral, ALTAIR’s General Manager leads that initiative as well as runs the day to day ops at ALTAIR. 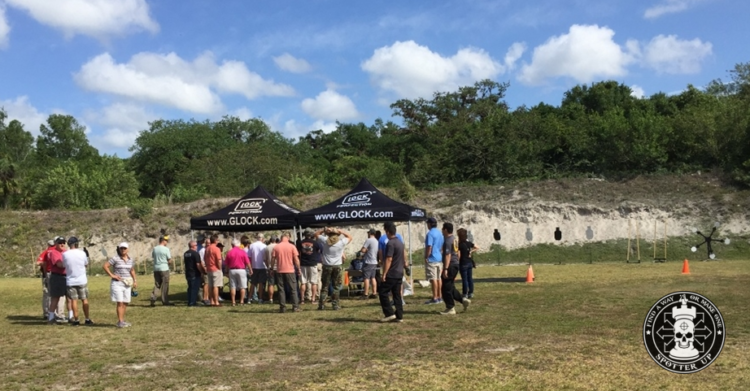 ALTAIR is a very busy place.  Besides hosting guest instructors they also host monthly 3-Gun competitions.  They also support private training, corporate team building events and LE training.  ALTAIR even has the capability to support LE, military and special operations training on an additional facility about 20 miles away where visitors can train in almost complete seclusion. 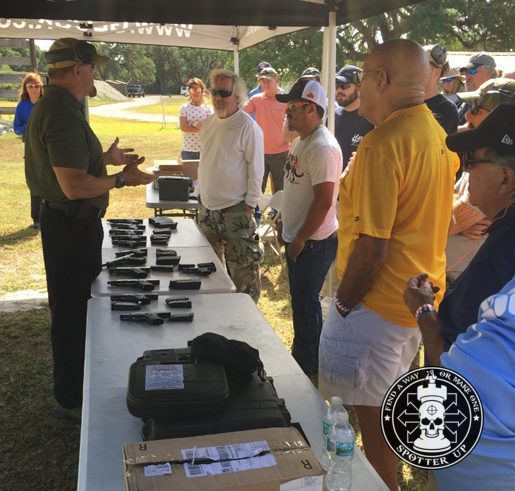 All this said, ALTAIR is a gun club.  Members must take Tac 1 pistol and be an NRA member.  This ensures every member at ALTAIR has the basic skills necessary to shoot and safely draw from a holster.  ALTAIR will also allow visitors to come out to the facility and try it on to see if it’s a good fit for their shooting needs.

ALTAIR’s open house hosted over a 100 visitors.  Sign in went flawlessly as the Ladies of ALTAIR efficiently logged in visitors, issued bracelets to test fire some of the Glocks at the Glock tent and sold tickets to shoot multiple magazines through a variety of UZI’s at the UM Tactical booth.  There was also ALTAIR memorabilia and a cookie charity drive for “She Never Quits” a charity for the spouses of deceased SEALs.  Give them a look.

I wandered over to the Glock tent first and listened to Joel Hodges presentation.  Joel is a burly former law enforcement officer and SWAT team commander.  Key points of his presentation were the advances made in 9mm ammo, point shooting, using optics (train on it to avoid searching for the dot), don’t over lube Glocks and how the first Glock came about being invented.  Joel made a profound point.  The speed in which the Glock was designed to meet an Austrian military pistol requirement drove what has become legendary innovation.  That same sort of necessity drove other innovative guns like the 1911 and Stoner’s AR10 design, the father of the AR15/M16. 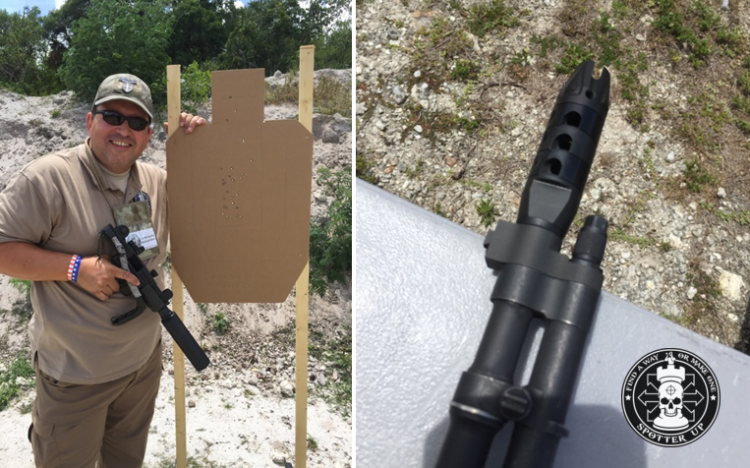 Glock had an overwhelming variety of pistols on hand and visitors were allowed to fire about a dozen rounds through any of them. I selected the Glock 43, its Glock’s only single stack 9mm.  I’ve never shot it but have been curious.  Predictably it functioned flawlessly.  Personally I prefer a double stack because of capacity but I can see the G43 being a great solution for those that need a pocket gun, as a backup or have a wardrobe where a larger gun wouldn’t work. 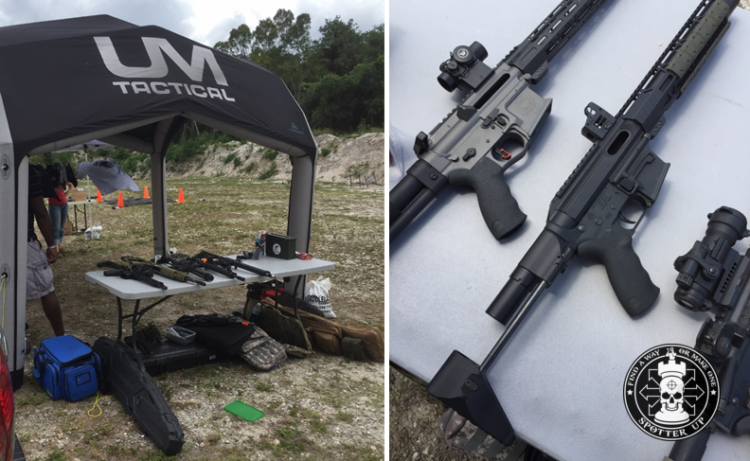 UM Tactical Tent and the SS9mm

UM Tactical was also on hand.  They were showcasing the SS9M.  It’s an integrally suppressed 9mm carbine that’s getting interest from a variety of government organizations.  It deserves its own article.  Todd Lewis brought a couple of full auto Uzi’s to include a suppressed mini-Uzi.  They were a “blast” and a “whisper” to shoot respectively.

UM Tactical also had a unique mount and holster system on display that allows one to run an optic on just about any handgun with a rail.  The system has many advantages like mitigating recoil to an optic and being compatible to a wide variety of guns.  Another subject that deserves its own article.  The last bit of innovation at UM Tactical was the Rapid Adjustable Gas Expulsion (RAGE).  It’s an adjustable and configurable recoil management system.  Again, another article.  They’re coming.

A new area that Altair is expanding into is archery.  Surf & Turf Custom were on hand in one of the range bays with a large variety of bows for visitors to try out. Henley Shotwell the owner was kind enough to show me the ropes and allow me to shoot his compound bow.

It was my first time and I see how the sport can be addictive.  Surf and Turf carries all the major names in bows and also offers custom made fishing rods.  They are located on the west coast of Florida in Naples easily accessible to great fishing and hunting. 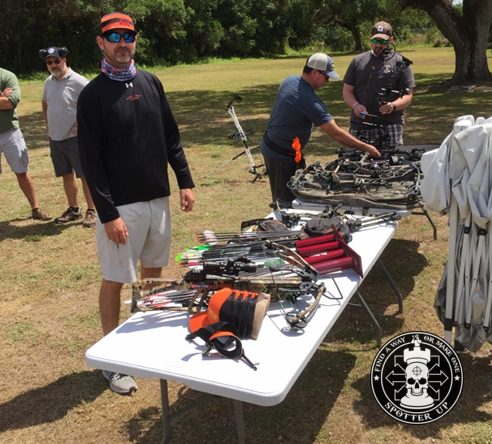 My three hours at ALTAIR Gun Club’s open house flew by.  If you find yourself in South Florida it’s very accessible to both coasts.  Visitors to South Florida should be sure to visit the sites training calendar to see if they can take advantage and if you are planning a family vacation ALTAIR is a haven for the shooter(s) in the family.  Those that live in the area would be well served to pay the Gun Club a Visit or become a member. 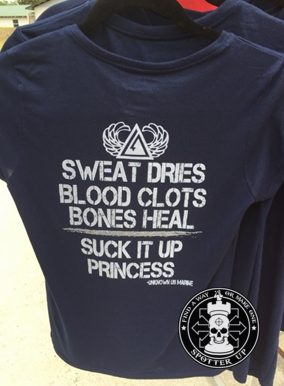 The amenities, location and capabilities are unique.  It’s one of the few places support training from the absolute beginner to affording shooters an opportunity to sit on the side of a helicopter and try their hand at engaging targets while in flight.

CLOSED on SUNDAY and MONDAY

Brought to you by the dudes at Spotter Up. All photos by Will Rodriquez