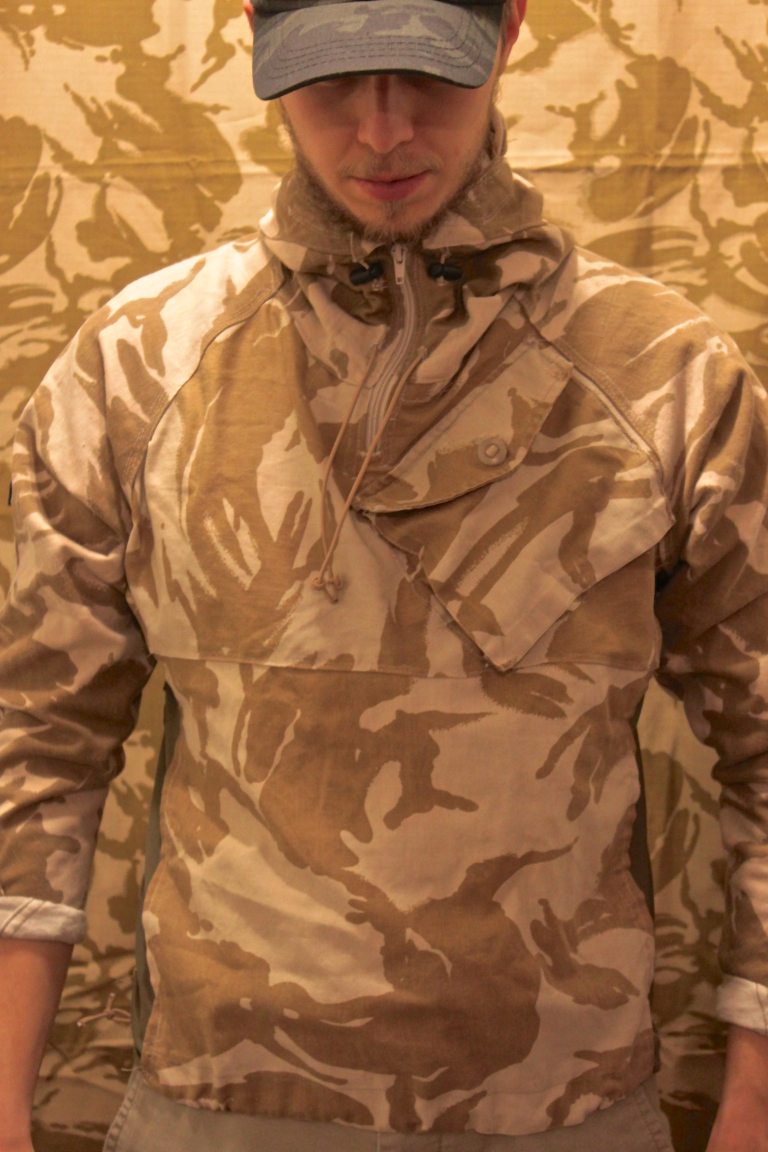 To understand why I am writing this article and why I have sewn this shirt myself, we have to take a short trip back in time.

My family had a men’s clothing store in Northern Finland. It was well-respected, our suits and other products were well liked and business was good. I remember, when I was just a small child, that my grannie used to take me there through the back door. Outside, in the courtyard  there was a huge yellow bird painted on the red brick wall, or might have been a billboard to advertise a phone line company. Inside there were stacks of fine cloth, racks of suits, sewing machines, and marking chalk and so on. The air was thick with the kind of dust you get, when you have a ton of fabric and metal machines in the same room. Still the dry smell of that kind of dust brings me comfort.

Sadly we do not have that store anymore. But even though the store is history, these memories will never leave me. I think that these memories have affected my interest in style, men’s fashion and to sewing and tailoring as well. I have always been a big dreamer, with my head in the clouds. All the DIY posts from gear forums messed with my head and I used to show them to Blue saying “I want to try this!” or “This does not seem so hard!”. Blue, who has always been a kind of voice of reason to me, used to say that I should not bother. Learning sewing is way too difficult and also time and money consuming. 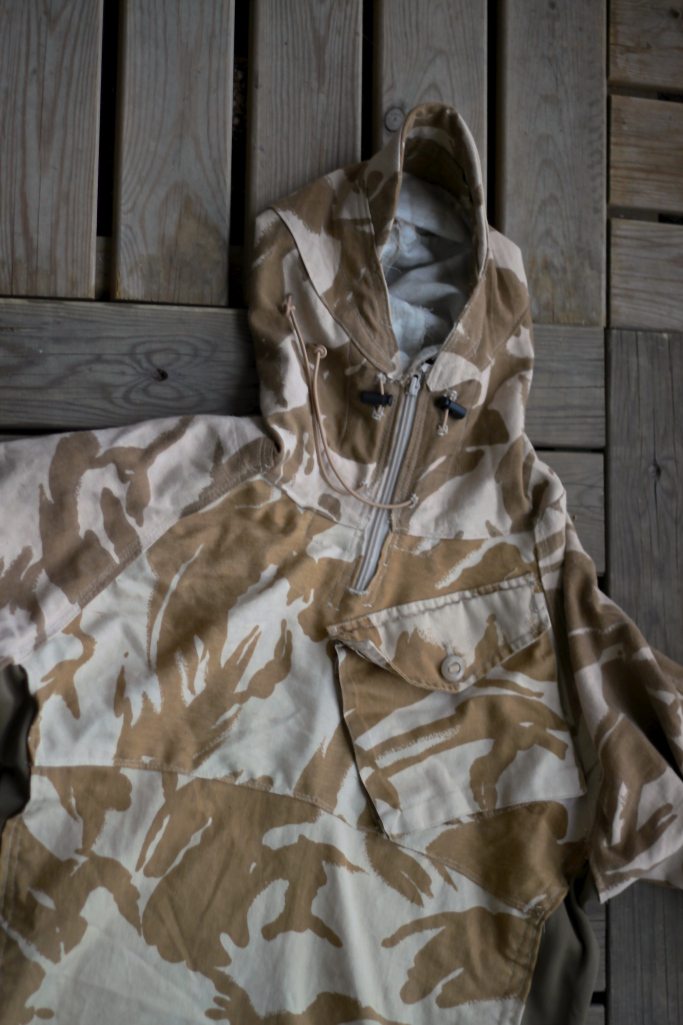 All this ran around my head for some years. And I did nothing, feeling that even trying something out would be too difficult. Until this autumn, almost involuntarily I started to sketch shirt designs on the back of discarded envelopes and meeting handouts in work. Suddenly everything lined up perfectly for me. I had old and threadbare British DDPM field shirt and similar pair of pants lying around. In my head the shirt and pants would yield the material for my design. And my co-worker was willing to borrow me her sewing machine. And on I went, diving head first into this project, without a clear plan of what I wanted or what the result would be.

My idea was simple: make a desert fighting shirt, that was to be a kind of hybrid between a half-shell, a combat shirt and an anorak. Ideally it would protect the upper abdomen fully, but that the bottom part would be of well breathing material, allowing the comfortable use of a chestrig. For the breathable parts I would use parts of a British UBACS t-shirt. I have bought several of these in various colours from Varusteleka, and I have to say that they are great for sports and cheap as hell!

A detail of the hem and the drawcord. The breathable side comes all the way up to the armpit.

Then I spend a good few afternoons just carefully cutting the DDPM garments in pieces that allow me use most of the fabric for the new shirt. I took all of the buttons, pockets and components and put them aside for future use.

After that I took several old pillowcases to be used as patterns. I picked a long sleeved t-shirt, from which I then traced the lines for the inset sleeves. I also used the Triple Aught Design Stealth Hoodie to trace the pieces for the Aero hood. By this I wanted to see how hard something like that would be to sew together. Then I made some crude measurements for the front and back pieces, that would reach around the whole ribcage. And my original plan was to somehow make the rest of the hem of the shirt from one of the UBACS t-shirts. 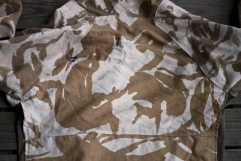 The backside and the separate upper back section 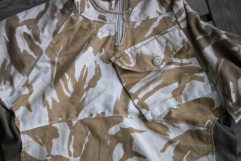 Showing the chest and the pocket

With the patterns ready, I set them on the biggest pieces of the DDPM fabric. And from the beginning I noticed that I would have big problems. I had used a fairly big piece of the DDPM for a neck tie project earlier, and so I was going to have some issues, especially with the torso pieces.

But I soldiered on. I finished the hood first and it turned out great, even if I say so myself. Then I cut the sleeves. This I did from the thicker fabric of the trousers and I left the original inseams intact from both. This turned out to work ok, although the seam sort of twists around the arms.

In the end decided to do the back and front from the DDPM fabric, but then do the sides of the technical fabric. I even bought a few new MTP UBACS’s from Varusteleka to better mach the colours of DDPM. Here the amount of fabric came to be the biggest problem. I was hoping to do an extended hem, so that when tucked in, the shirt would not ride. But the hem is quite short now, which is why I added a drawcord with a pull lock on it.

I finished off with an angled pocket on the chest, which I took straight from the old fieldshirt. I consciously left pockets off of the arms, because I hate to have heavy items there, bouncing around. Instead I just added two velcro backings from some patches. One does not to forget the tactical swag so easily.

The shirt is actually a bit WIP still. I have not finished the end of the sleeves yet and I actually do not have any idea what to do with them. Also I wanted to add the old draw belt of the pants to the inside of the neck lining and to sew the old faithful Union-Jack on it, to honour the beginnings of the shirt. 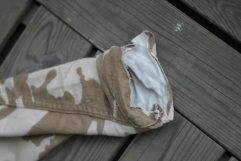 The sleeves still need to be finished. 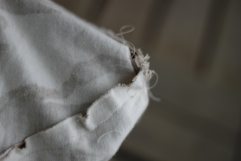 Inside finish was not a major concern for this project

The shirt is not much, but it is something. I showed myself, and Blue too, that I can do stuff like this if I put my mind to it.  We have already started to sketch out some new designs together. I think with time and practise, and careful planning with Blue, we will able to bring something awesome to life. 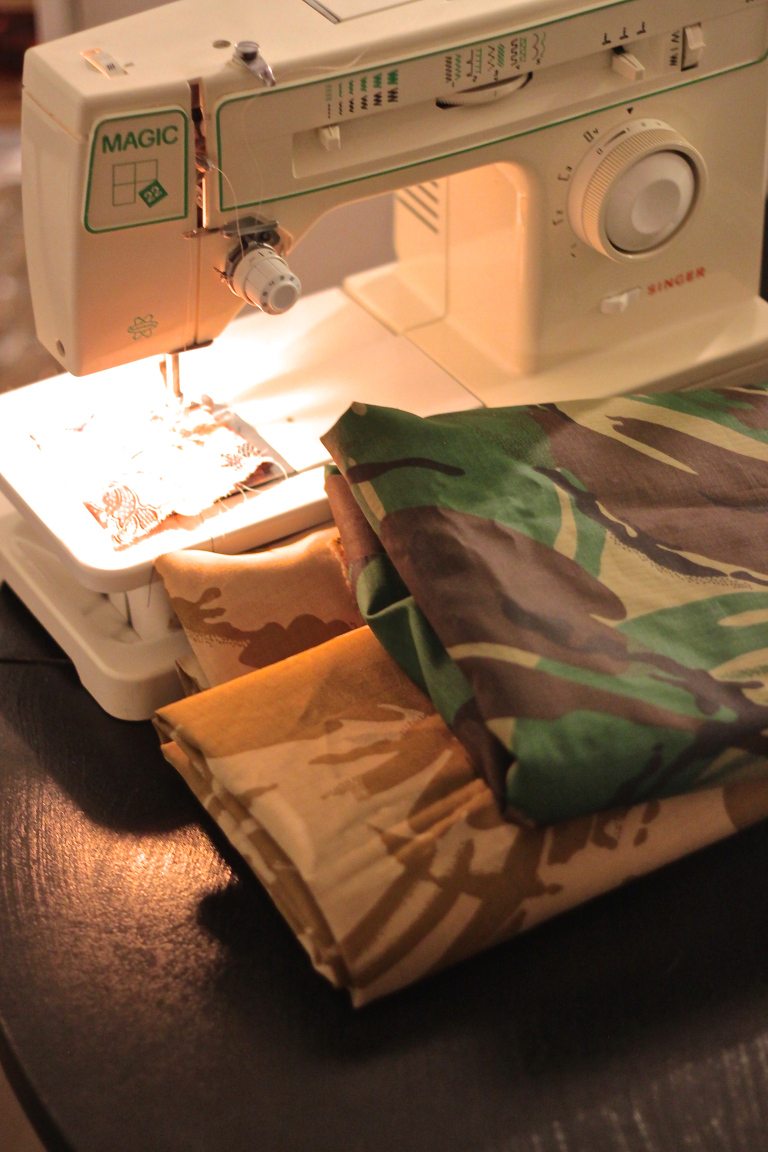