Clinger Holsters is a company out of Arizona that is focused on making Kydex holsters that offer true and complete concealment. The holster I have to review is the No Print Wonder, which is the Clinger Holsters flagship model. This model is designed to maximize the concealment potential of your pistol. Due to this claim, I saw no reason not to test it by getting one of their holsters for my full size Beretta PX4 Storm. If I am going to have a holster that claims that it won’t print, we might as well challenge the name a little by testing it with a full sized pistol.

The features on the No Print Wonder are a little different than other holsters on the market, and they incorporate a slightly different construction combination in order to help lower the profile of your pistol. The Kydex used for the pistol mold is thick, and covers the magazine release to protect it from accidentally getting actuated while you are carrying. 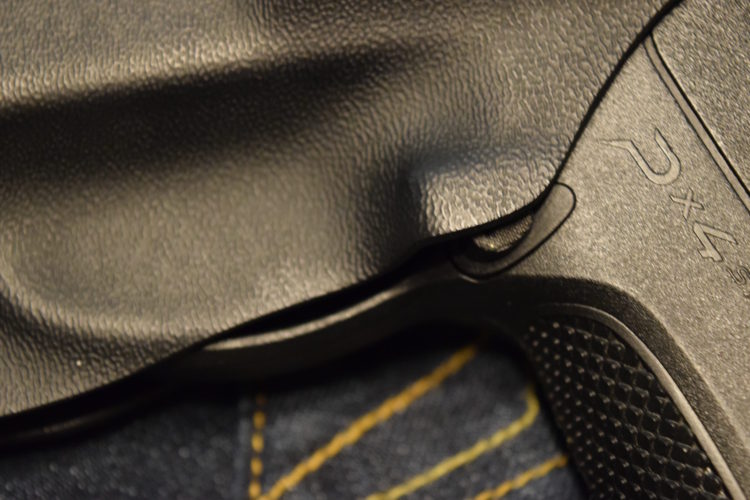 The Kydex pistol mold also incorporates a sight channel that is supposed to give the sights more clearance. 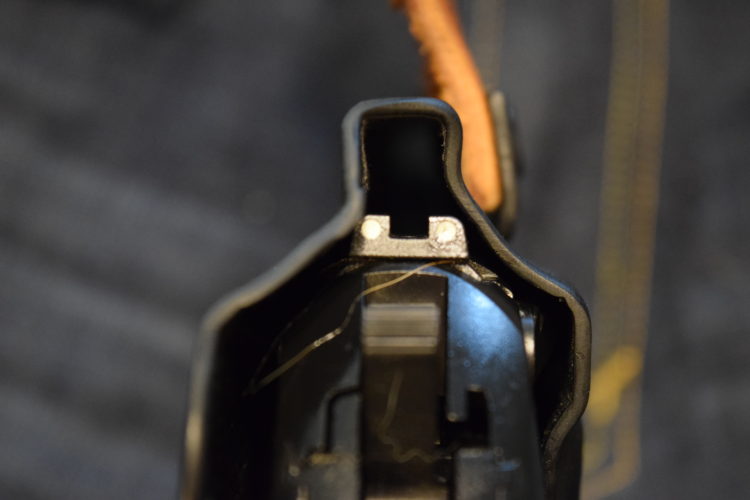 The steel clips for the holster are positioned on two tabs that each have three positions. One tab is made of a thick leather that has the Clinger Holsters logo on it. 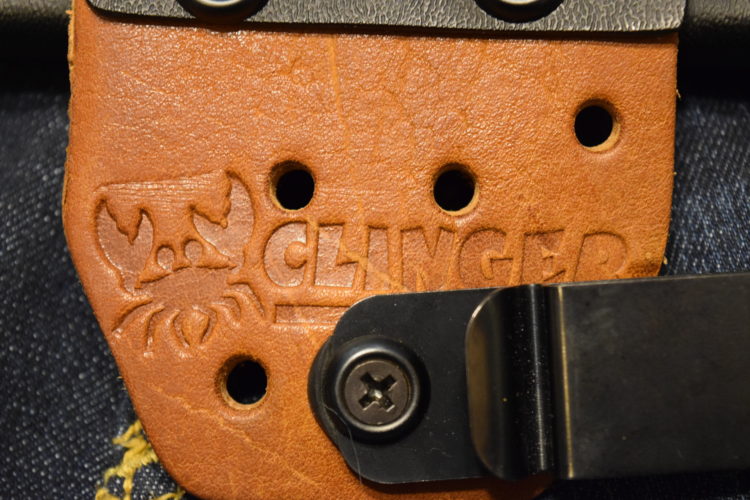 If you look on the company website, you will not see any extra holes like my holster has. Granted this holster was a free holster for review purposes. This leather is designed to work with the contour of your body and help the pistol stay tight to the body. The polymer tab is curved and is designed to help push the pistol grip close to the body. 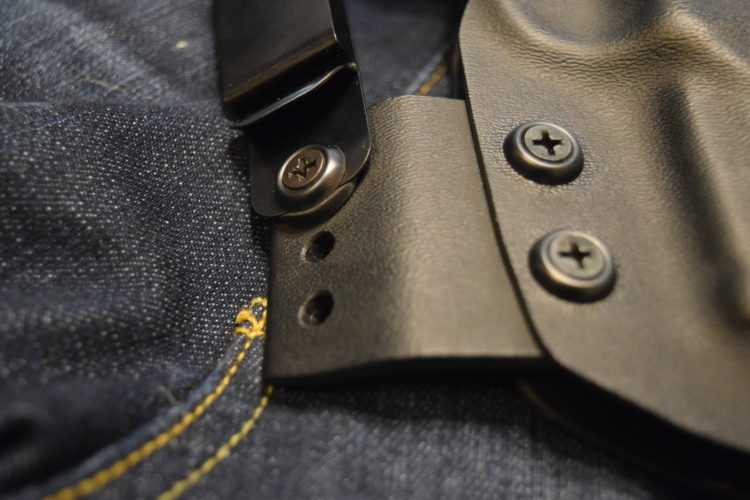 When Clinger Holsters designed this holster, it would seem that their intent was to maximize the versatility and capability of this holster, which would explain certain things like the three holes on the pistol mold. 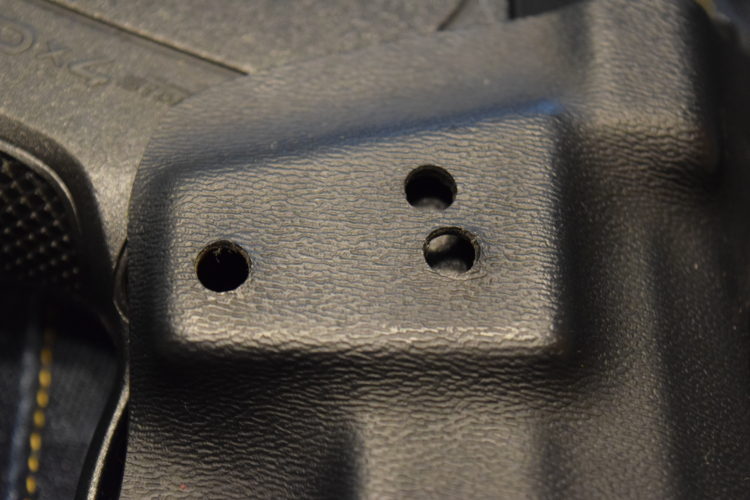 These holes are there so that you can take the provided polymer clip and hardware pack, and turn the No Print Wonder into something resembling their Stingray holster. 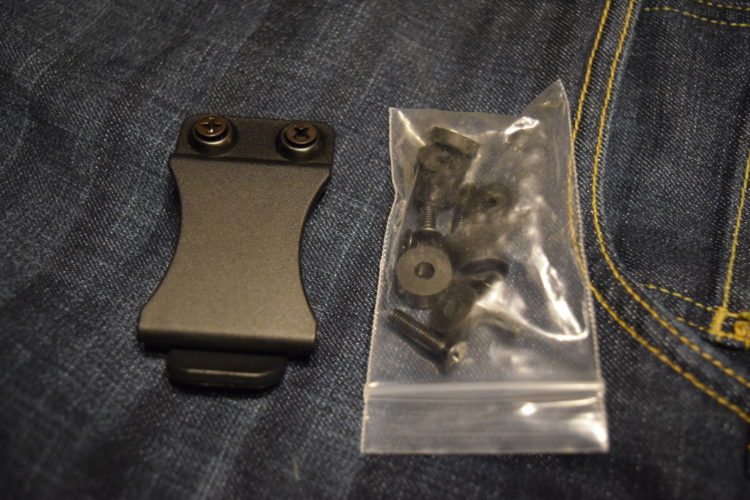 Also, Clinger Holsters notes that it would be quite simple to turn their No Print Wonder into their Ultra-Conceal OWB holster, simply by buying and attaching OWB clips where the steel clips exist.

The Kydex overall is shaped to give maximum clearance to the features and shapes of the firearm when holstering and re-holstering. 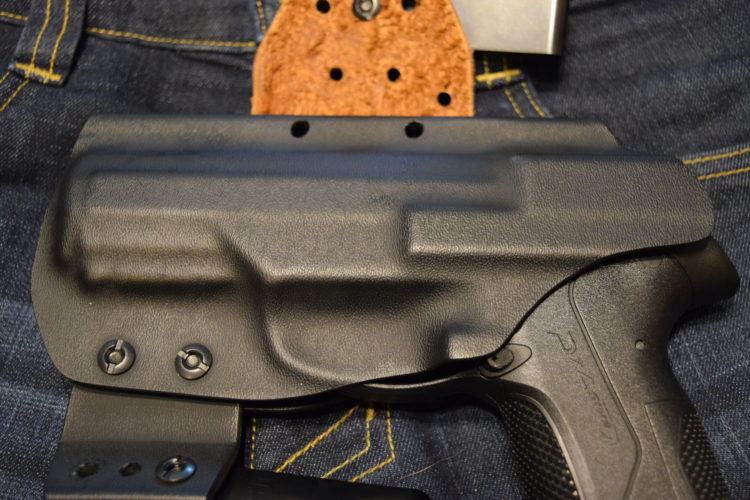 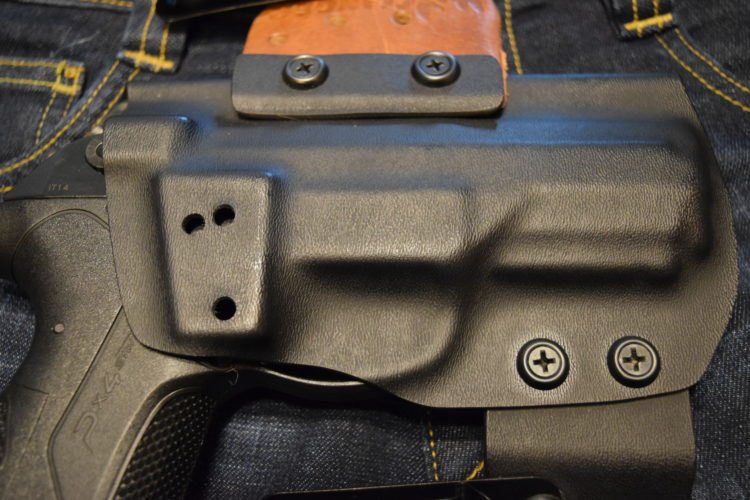 Also you will notice that the holster features a complete sweat-guard that I will talk about later in the article. 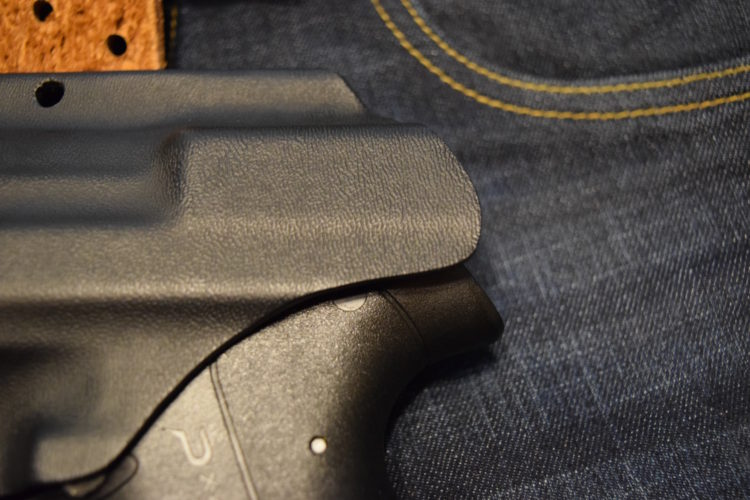 The holster has pretty good features that scream function over form. When you consider all the features combined, the holster just seems completely utilitarian.

As the name states, the No Print Wonder is designed to give you maximum concealment with whatever pistol you choose. The way it seems to do that is by putting function before comfort, in some cases. My first example of that is the polymer tab on the holster. Yes, it definitely pushes the grip of the gun into the body, but if you didn’t know why that piece was there you would think they designed the holster wrong. That space created by the polymer tab is nothing short of a channel in which my shirt seemed to run freely up my side during draw practice. Not to mention the fact that it just feels like that polymer tab is pushing out of your pants and printing terribly. That is not the case at all, but it can really mess with you throughout the day at first. But make no mistake, I never found it to actually print in any way.

The polymer tab is designed to push the grip into your body more, allowing for greater concealment potential. It definitely accomplishes this, but at a price in comfort. Clinger Holsters clearly states that their purpose is to focus on function while also allowing the user to be comfortable while carrying. I would say that this is a worthy sacrifice if I can carry a full sized pistol around with minimal risk of printing for more time throughout the year.

One thing I wanted to point out is the fact that the retention on this pistol is minimal at best. It barely is retained in the upside down hang test. Give it a little jiggle and the pistol falls right out. This is an issue that can probably be sourced in the fact that the trigger guard is not completely contained and covered. 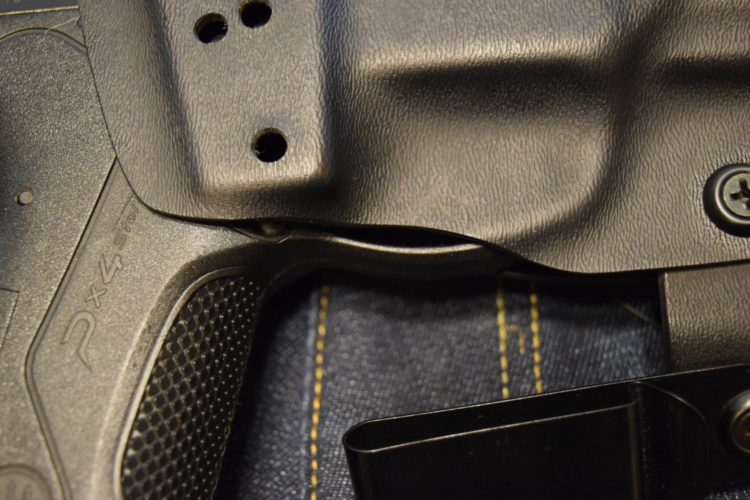 Though, I will also add in a note that I did not see this in other firearm holsters they make.

When I was wearing the holster at first, I tried to wear it as I wear any holster, which is with just a hoody on and nothing between the holster and my skin at a 3’o’clock position. I immediately noticed that the sweat-guard was gonna be a problem. The sweat-guard on my holster had a problem with poking into my chubby manhandles. 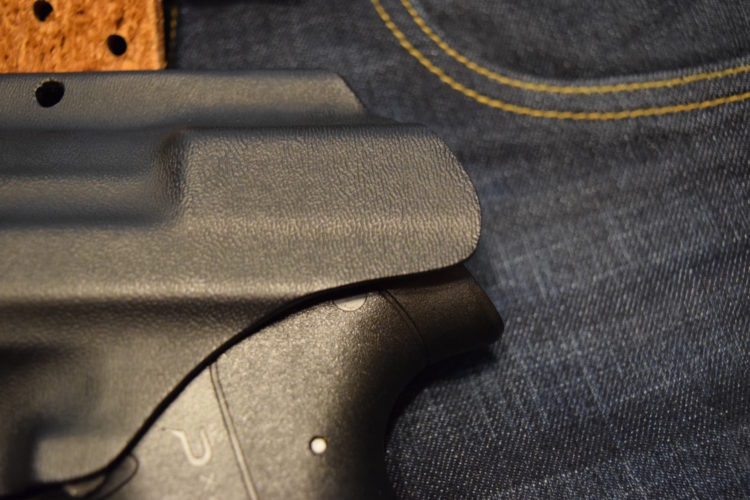 If I were a little more responsible with my fitness, this wouldn’t really be much of an issue. Regardless, I had to incorporate a shirt under my hoody and tuck the shirt in well. That seemed to solve that problem for the most part. I will say that the sweat-guard does a good job preventing my pistol from biting my side when I am re-holstering.

Also, i want to point out that when tucking in a shirt, the solid polymer tab prevents the holster from holding the shirt in place. I found that the tab allowed the shirt to slip up out of my pants in the grip area, which is the worst area for this to happen. If you get a good grip of shirt and grip, it can screw up your draw and you will snag yourself pretty bad. On the other hand, I never had this become a real issue unless I was continuously practicing my draw stroke. When wearing it all day during my daily work routine, there was never an issue.

The V2 No-Print-Wonder comes in at a standard price of $70. The original No-Print-Wonder comes in at $60. The difference is that you get added versatility in the V2. Personally, I would opt for the original since I find the added Stingray clip to interrupt my ability to lift my garment. I have tried to make other holsters with the same clip work, and have always had issues with it snagging on my shirt or hoody.  I have found that holsters with two clips tend to hold positions and cant alot better than the Stingray style would in a 3’o’clock. That being said, I think the V2 could be a great value for the end user if they want three different options such as two styles of IWB carry, and an OWB carry.

I would just say that I think some of the features are a little overdone, such as the exaggerated sight channel.

The materials are sourced in the USA and I find them to be solid and good quality.

I found it disappointing that the holster failed to completely cover the magazine release and the trigger guard.

The holster does what it is designed to do, but I think they could have perhaps used a little neoprene backing for increased comfort. But this would obvious raise the cost. Also, I did not care for the poor design of the solid tab, which lets your shirt crawl up your side a little too easily.

I feel that the simple construction and lack of complexity should keep the price a little lower. I fail to see that drilling three holes justifies an added $10 to the price.

I received this product for free with the agreement that I would give an honest review of the product. I am not under any written, verbal, or implied contract to give this product a good review. All the opinions stated here are my own, and do not reflect the collective opinion of the other writers of Spotter Up, nor the company as a whole.