I have kept a great book on my shelf for nearly 20 years now. It’s called Historians’ Fallacies: Toward a Logic of Historical Thought byDavid Hackett Fischer. It’s good reading for anyone who is interested in peeling back the onion on nonsensical reading material and speeches that are put out so often by our media, educators and politicians. Fischer proclaims there is an anti-intellectual attitude by historians that he calls “misology”.

I have to agree. For those who have a sincere interest in trying to understand what it is that they read, I argue that you should give Fischer’s book a try, because it will serve as a useful tool to parse away the illogical arguments in history books that are out there.

For some readers who are just beginning to get into history (military history included) and geopolitics I believe this book would be useful to you. Not only is the book good for better understanding history it will also help you understand and identify logical fallacies used by people in debate and arguments. 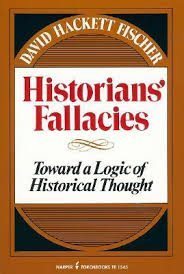 Fallacies are a mistaken belief, especially one based on unsound argument, deliberate or otherwise. Understanding fallacies, how to apply them, how to spot fallacies in the arguments of others, is a means of promoting rationality. Looks like a duck, walks like a duck, so it has to be a duck…or maybe not.

Fischer is convinced that the majority of historians and specific social scientists make illogical arguments to justify their interest in the past. He wrote, “Those historians who imagine themselves to be emancipated from philosophy,” he declared, “are apt… to be the slaves of some defunct philosopher” (1970: xii). A critical person is better able to defend one’s self from bad thinking found in many history books, dishonest college professors, intellectual elites and the snarky co-worker who opines on why X President is worse than Y President.

In his book, Fischer discusses over one hundred different logical fallacies and goes into great detail and uses well-researched and pointed references. He makes logical fallacies very easy to understand. I too believe, those who are willing to apply logic over bias, will actually improve their historical thinking.  Fischer’s book is good for those interested in history. Fischer respectfully points out the mistakes of the most prominent and respected historians, for example those who believe history has epochs or stages, and corrects the writers in an amusing way. Here are some brief examples from the nearly 100+ that are entered in his book:

The historian’s task is to research, analyze, interpret, and present the past by studying a variety of historical documents and sources. The historian is supposed to use his training and experience as an expert on events and chronicle them without illegitimately distorting the historical record.  One writer wrote that interpretation is inevitable, but the interpretation should conform to the evidence rather than being lopsided and biased to one side. I think that statement sums up Fischer’s sentiment. Fischer targets those who impose their ideological interpretations on historical events. For those who are looking for good reading, especially those who are fans of Military History books, take a look at this book.