It’s better to light a candle than curse the darkness. Eleanor Roosevelt 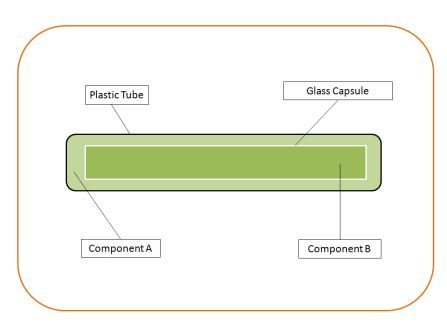 Try not to be in a situation where you’re without a light source. I’m certain a good many of us have been on a dusky road, walking in darkness. And there’s that sinking feeling that things are pretty bad or going to get worse. You might have a candle in your car but you might not have matches. Glow sticks are a good way to see in to the darkness and let others know you want to be seen.

You don’t have to spend tons of money for the most expensive items. For good, cheap lighting at night try a glow stick. Lots of people know about them, but here’s more good info:

For those that haven’t used them, a glow stick is a lighting device that gets its appearance because of a chemical reaction. The reaction which occurs inside the glow stick is called chemiluminescence and provides the user with a temporary, yet inexpensive form of lighting for night visibility.

These things are light-weight, easy to store, simple to activate and safe to use.

By snapping the stick you break the ampoule housed inside a plastic sleeve and then shake the stick to mix and activate the two chemicals within it to create your light source. 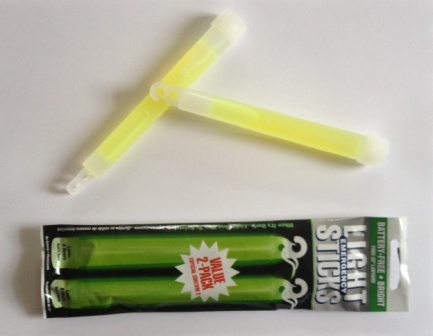 Many uses for this safe product

Used by the public and government groups, glow sticks are a good, cheap form of re-lighting your area following night vision loss. FEMA, the police, the military, and the Red Cross use them regularly. On a clear night, some of the best models can be seen for up to a mile away and this makes it an alternative to using road flares for marking a road accident.

Because there isn’t an open flame or electrified components to initiate a fire or an explosion, glow sticks are safe to use after a disaster. For example, you may not have access to a working flashlight, and using matches during a potential oven gas leak or gasoline spill could have a very dangerous outcome.

I keep plenty in my house just in case my batteries fail in anyone of our dozen flashlights stored in the home. There are cheap flashlights available for under $2.00 from China sold at Wal-Mart but it’s likely to stop working or not operate as well as a quality light.

Because glow sticks are submersible, they can be used by recreational divers. I’ve been told that fishermen use these as a night-time lure, but I haven’t been able to verify how well that works. As a hiker and camper, I can tell you how great these are for securing to your back pack and clothing because there’s nothing worse than getting separated from your traveling party.

I still do a lot of night-time trail running. If my Petzl light happens to tank on me, I carry one of these sticks. In high school cross-country we spent a lot of time running to the crest of a low-mountain and then tried to catch the switch-backs all the way down before the dusk turned to dark. Glow sticks would have been great to have back then. 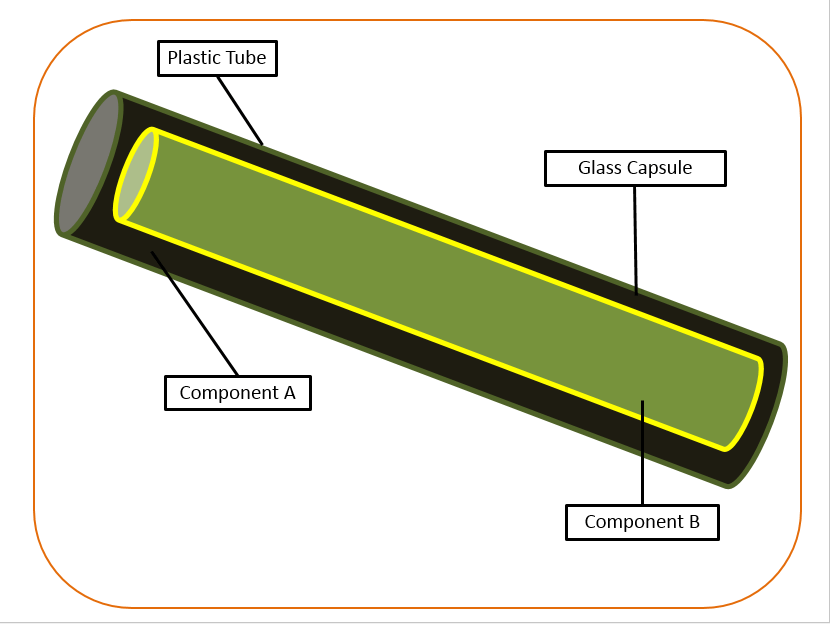 Good information to know before making your purchase


It’s recommended that you keep them aboard your vehicles, boats and aircraft and inside your emergency kits, and it’s best to purchase the higher quality brands for many reasons. Better brands individually wrap their sticks with an outer foil that protects the stick from heat, light and moisture. The good stuff can be stored for up to four years. Cheaper versions tend to have thinner walls that are susceptible to cracking and won’t store as long. We store the 8 to 12 hour durations.

I gave my son a few Ameriglo sticks to try out over a period of a week. We hung them from the heater vent above his bed. Every night we used one of the 12 hour glow lights. As the hours progressed, the output of the stick faded until it was gone. I have to say, I was impressed, because the lights nearly lasted 20 hours. Even though there was little light output, it was enough to still use to do something rudimentary such guide me to a light switch on the wall or identify an item in my pocket. Each one we tested went beyond the 12 hour period.

A tab/hook at one end of the stick provides versatility for hanging it and the package should include a lanyard. But if it doesn’t you can always use duct tape to secure it most any place. You can use fishing line or kite string and mark your campsite or area with glow sticks.

The hook on cheaper models has a larger opening and it makes stringing a glow stick on a line not so great on windy days. I think it’s better to get one with a smaller/nearly closed hook like the AmeriGlo brand. 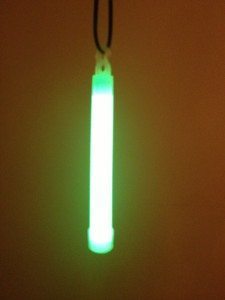 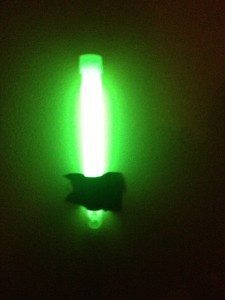 If brightness and long duration is your goal, the length of the stick, color, and fill level generally determine how long your stick can last. The glow times should be listed on the packaging and on the top of the stick. Green and Yellow are the most popular for outdoor night-use, following with orange, Red, Blue, and White. Blue and Red are preferable for divers. If you intend to use night-vision equipment then look for infrared glow sticks as the infrared radiation is detected.

Here are some different versions

Lots of hardware stores carry glow sticks. If you buy online, make sure it’s a reputable dealer. I know firsthand how a dealer advertised a quality product with a picture of a well-known brand and then shipped an inferior model/counterfeit. Also, some of the counterfeits coming out of China is being sold to unknowing (or knowing ) retailers. They are forgeries that look almost as good as the real thing and the public is buying it. Just do your research to avoid this problem.

On pricing, the cheapest model I could find retailed in bulk for about .40 cent whereas the best version sells at $1.75. Whatever brand you choose, a handful can be purchased for under $5.00 dollars and are good to have around.

Coleman Glow Sticks about $1.23 a piece 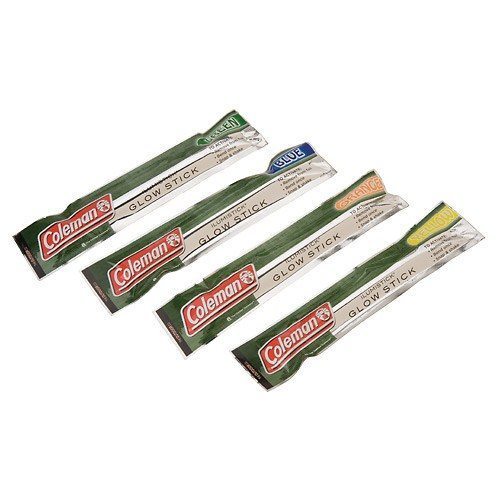 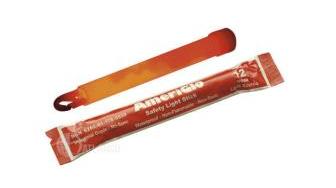 Cyalume Glow Sticks about $1.20 a piece. 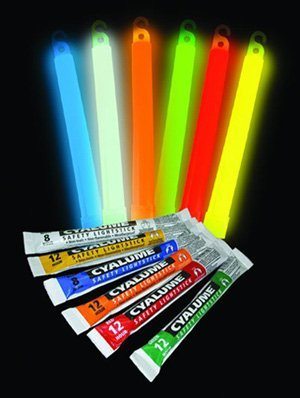 ChemLight military grade green light stick for providing illumination for up to 12 hours. Measures 6″ long and provides 360 degrees of illumination. Meets military specifications. Chemiluminescent substance is non-toxic and plastic body is phthalate free for safety. Four-year shelf life from date of manufacture for a maintenance-free alternative to other lighting.