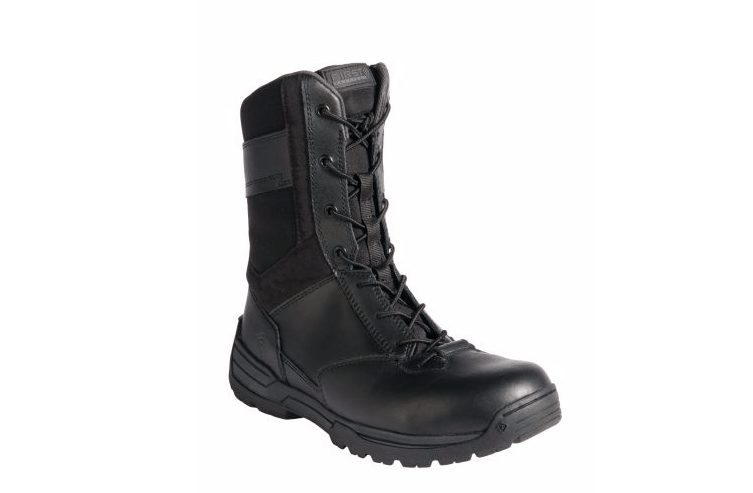 I can’t remember the last time that I had worn any type of shoe at work (maybe at the Police Academy when I had no choice).  I have been a police officer working patrol for 26 years now.  I prefer boots for ankle support and it’s easier to hide my backup gun in an ankle rig.  Old school for me, I carry a S&W J-frame snubby.

Back to the boots; for me work boots for patrol have to be lightweight and not too cumbersome looking.  On patrol you do a lot of walking. Boots have to take a shine as well. In order to make a good, professional impression on people means not having a worn out looking boot for patrol.  Laces have to stay tied and be easy to untie.  The soles have to give good traction on the ground; you can end up wrestling someone to the ground.

Good stability and traction is a must.  Since I work in Illinois, we can have a warm, sunny day one day, a cold, wet rainy day another and it’s all too frequent in the winter; all the above as well as snow, ice with freezing cold.  I have flat feet and most shoes I wear I have to take out the insoles just to get my orthotics to fit inside.  I haven’t had too much experience with side zip boots.  I have been wearing one pair for the last year and I am not happy with them at all.  I don’t like it when you have to untie your boot and unzip them just to take them off.

I received a pair of First Tactical Side-Zip Boots to try out.  My first impressions of the boots were positive.  I liked the way the boots were packaged up for shipping and they were in good order when they arrived.  I did have an issue with the chemical like smell that they gave off.  I put them outside for a while until they lost the odor.  Didn’t bother me as much but, but my wife is a little more sensitive to chemical smells. They seemed well put together, no loose stitching and no scuffs on the leather. 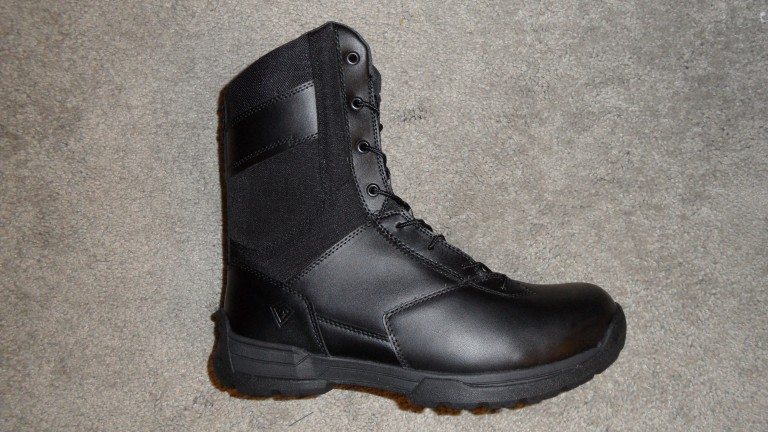 One thing I liked right off was the pull loop on the back of the collar stayed flat.  I dislike it when you have a boot with loops that stick out because your pant leg gets caught up on it and gives you an unprofessional look as you walk in your uniform.  I slipped my orthotics inside the boots and when I put the boot on I did not have any issues with the insole needing to be removed.  The zipper was a little stiff at first to zip up and when I got the laces tied right the zipper would only give me issues once a while.  Seemed like it was hanging up while zipping up.  The strap that covers the zipper when it’s fully zipped up didn’t come undone during my evaluation.  You see, I have that ankle rig that rides up on the top of the boot and it can ride down over and on top of the strap at times.  On my other boot it would push it off but, didn’t on this one.

The boots are nice and light on my feet.  Not heavy or oversized.  First day at work I took out my shining kit and put the first coat of polish on them.  Having never served in the Military all I know about shining shoes is you put the polish on with one brush and buff them up with the other brush…  No issues and after another couple times polishing them up, I felt that they looked pretty good.  I have a tendency as I get into the squad to kick my left foot up and under the dashboard.  Usually kicking anything that is in the area at the time.  The toe cap held up well.  No gouges or scrapes. 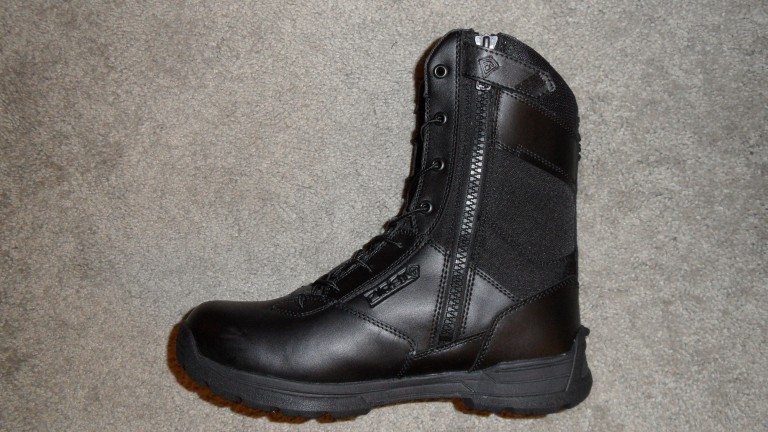 As for walking in them, I felt that they did very well.  Almost felt like wearing a shoe to me.  I did not feel the boots had a heavy feel to it as I walked.  I only had to run in them a couple times (like from the squad to the door of a house) and they felt pretty good.   I do have one issue with the boot while wearing them.  The right side boot as you walked feels bunched up in the ankle area as my foot bends.  Almost felt as if something was pushing down on the top of the boot making the material bunch up in the ankle area.  Not so for the left boot and that’s the one that has the ankle rig on it.  Only an issue when walking.  I did teach a concealed carry class one weekend and spent the majority of my time on my feet and did not feel uncomfortable for the 16hrs of class time.

The issue could be that my feet are not evenly balanced; my feet are not correctable! However, it could be production, at the factory. If the boots are not evenly produced then it is a production issue that can be corrected. It comes with a full grain, leather polishable toe.  It has a stitched rubber outsole. It has a heel-strike window. The heel strike window gives the user more cushioning while reducing impact on the feet and body while in motion. 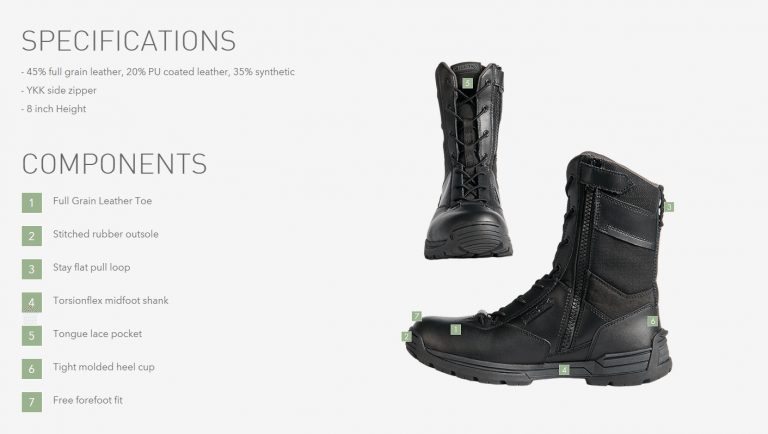 Easy to take on and off.

Right boot had problems breaking in in the ankle area.

Zippers would sometimes hang up and not zip up smoothly.

Bad chemical smell when I took them right out of the box.

This is a very new company. They have been very responsive to meeting the needs of the public in order to produce a top quality boot. The issues I mentioned, such as the zipper, could be a sourcing issue. A substitution can be found. I wore the boots for 30 days before I did my review. Boots should be wearable immediately and not take overly-long to break in. I believe if they make some corrections the will have the attention of law enforcement companies. They are priced very well for an officer on a budget. $99.00. If you are looking for something sturdy on your feet I think there are other known brands that will do a better job. They are penetrating the base consumer market and are doing  a good job at it. For those who want a higher end product you will have to wait and see what First Tactical does. This is a decent start. I am looking forward to seeing this company succeed. 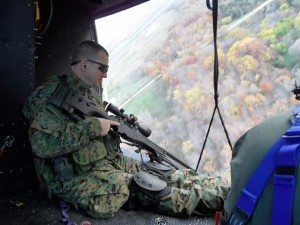 Holzinger has been on the job since 1990. His primary assignment is the patrol division where he has served as a Field Training Officer.

He began his SWAT duties in 2000. Since then he has served as an entry operator, ballistic shield operator and sniper. He is currently the Sniper Team Leader with the South Suburban Emergency Response Team (SSERT) a multi – jurisdictional SWAT that covers over 30 suburban towns on the south side of Chicago, Illinois.