Naturally before we begin it needs to be said: CALL 911. However since we are a page dedicated to prepping and crisis management, it stands to reason that in this venue there is no 911 or 911 isn’t coming. Either way YOU need to act….

Why start with trauma?

Trauma is universal to every major catastrophe that’s hit the US since 1776. Of course we support learning how to shoot and the myriad of other skills required to stay ready, but trauma is statistically proven to be the most likely event you will encounter.

Medical skills aren’t sexy and tend to be put on the back burner in favor of more glamorous venues. A $2000 assault rifle ISNT going to stop bleeding or manage an airway is it?

We get it, medical supplies are expensive and there is an army of “practitioners” who want to keep control over medicine, but that isn’t going to cut it for a prepper.

What medical program should look into?

There are dozens of good programs out there and they all will be great additions to your tool box, but for a prepper nothing can hold a candle to Tactical Combat Casualty Care or TCCC. TCCC was intended to teach NON TRAINED service members in the military basic life saving skills so you can rest assured your “allowed” to know this.

It’s also what all of the elite fighting forces use on their teams, this goes for Green Berets, SEALS, PJs, Rangers and so on. It’s also designed for an austere venue where evacuation will be delayed or wont be coming at all, again another check in the prepper block.

TCCC is backed with mountains of good data managed by Doctors and senior battlefield medics from across the DoD arsenal, this is a solid program for everyone to know.

If the answer is no, then your entire trauma strategy needs to change to reflect this reality. It doesn’t matter if it’s an enemy force denying you evac or an economic collapse, you’re on your own…

Start with the assessment. Look at it like the toolbox, and all of the treatments are the tools. Lets focus todays article on the toolbox.

The TCCC trauma assessment is placed in order of statistic injury patterns that are ranked from the most lethal (short and long-term) to the least lethal. All the “science” you need to know is built into the sequence.

When in doubt or you get overwhelmed or lost, just start the assessment sequence over and you’ll do fine…

Its easy, just remember MARCHE and treat as you go!

Bleeding was controlled with a ratchet strap!

M-Massive Bleeding. Here you are looking for pooling blood or fast bleeding you can see. We don’t care if its bright red or not, those days are gone.

You can die from losing venous blood also…If its NOT bleeding, skip it we will come back to it later. Ugly wounds are distracting but if they aren’t losing blood (for now at least) they aren’t a priority during your initial survey.

We need to save as many blood cells and clotting factors as possible and most arteries bleed fast enough to kill you in minutes. This is where TCCC tends to deviate from traditional EMS medicine.

EMS hinges on the nearby hospital to manage the internal medicine issues that come with bleeding out like losing the ability to clot and acidosis. Saving as much “clean” blood as possible early on the event will give your patient the best chance at long-term survival when evac may not be coming… Use tourniquets and pack wounds, this is for time so hurry up!

A-Airway. Concept: Is the air hole open? It doesn’t do us any good to make a patient respire if there is no hole to pass air. While we prefer to teach a modified jaw thrust, we don’t have a problem with the head tilt/chin lift technique from your CPR training days.

In effect, we are temporarily opening their mouth and we asses “how open” it is by LISTENING for them to breathe. Remember, an airway blockage may not visible from a visual inspection, you still have to look listen and feel for air passage. During this initial survey, consider temporary adjuncts like a nasal trumpet (NPA) or a J-tube (OPA), we like using positional airways, aka the “drunk don’t puke roll to the side” technique…

R-Respirations. This gets confusing with new providers. When we say respirations we intend to examine the mechanical structures that are required to breathe. Namely the chest. For TCCC purposes the chest is front to BACK, Adams apple to navel.

Here you will apply seals as needed and check for any broken ribs that could haunt you down the road. IF a patient has a collapsed lung, you wont really notice any one thing jump out at you, things like deviated tracheas and one-sided rise and fall of the chest are late and grave signs, don’t wait for those… It will be a combined series of symptoms that we use to direct treatment in the field, but that’s another lesson in itself.

C-Circulation. Here we will check pulses and other signs of perfusion/circulation, also we will wrap up any other “meat” wounds we skipped over during our initial blood sweep.

IF you have the skills and feel the patient could benefit, now’s the time to gain IV access, but that’s a clinical decision based on your over all patient presentation and skill. Clean up all the boo boos we skipped and anything else we missed.

H-Hypothermia/Head injury. Not much you can do for a head injury other that take note of their level of consciousness. This early on information and the progression of symptoms form this baseline will be invaluable to any Docs that see them later.

Inexpensive options are out there

Always treat for hypothermia. In trauma we aren’t as concerned about heart attacks rather its effect on clotting. If you have a patient with internal injuries we want clots, and cold patients don’t clot!

Even in the summer put a blanket on them. Dead people are cold to the touch, even in summer… Don’t look at it like it’s a weather issue, look at it like their internal over has been turned off…

E-Evacuation. This is obviously your biggest issue as a prepper, or a commando. If we had this we wouldn’t be having this discussion! In all seriousness evacuation may be only be delayed.

Don’t look at SHTF as the only event you need to worry about. Ice storms and tornadoes could delay your 911 evacuation and TCCC will carry the day until they get here.

Most of the lives saved during the global war on terror are from non trained medical providers using simple adjuncts early on in the patients injury/evac cycle. What I mean is that untrained providers are proving this system works….Numbers don’t lie. 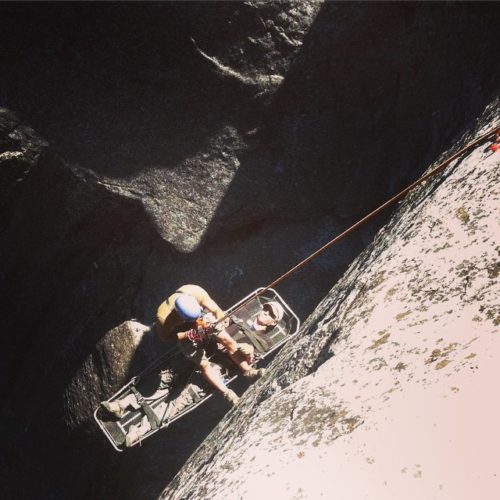 Naturally we recommend taking a class on the subject. Please don’t read something online and think you’ve checked the block for medical training.

Online programs are great for refresher and developing new strategy, but they simply don’t replace the value of hands on skill training with experienced educators. We can recommend a few good online references if you’re just interested in getting to know TCCC.