I reviewed Smart Firearms’ Advanced Training Laser Pistol (ATLP) version 1.0 several years ago and recently got to revisit an upgraded version.  Time has made a difference!  Smart Firearms’ ATLP is arguably one of the best if not the best, laser training pistols out there. It’s a must have for instructors that teach large number of beginning shooters.

Laser training pistols have been around for quite a while and fill an important dry firing and training need.  Their value is that they fire a harmless and cheap laser round while saving one from a trip to the range and you don’t have to rack the slide between shots.  One can get thousands of trigger presses for next to nothing along with the feedback of where one is actually pointing the gun.  There is a wide variety of targets and shooting software available that drives the ROI through the roof.  If you are serious about shooting, you really need a laser training pistol.

Yes, there are laser training cartridges one can install to get even more realism with sometimes the cost of having to constantly rack your gun.  (There are some approaches that circumvent that.)  These are viable options. I don’t prefer them primarily due to the unique batteries and battery life.  Still a potential solution, worthy of mention but beyond this article’s scope.

Back to the ATLP, Smart Firearms offers a wide variety of their laser training pistols mimicking Glocks, Sig  320, S&W M&P’s and even the AR15.  For this article I ran the M&P version which is identical in shape to my first review. 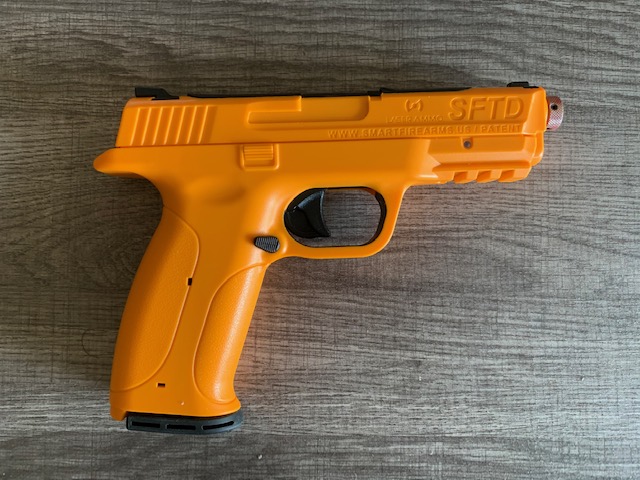 The gun comes in a blazing orange with a weighted simulated magazine.  It runs off of two CR320 batteries (included).  Laser windage and elevation adjustments are intuitively obvious with the included allen wrench.  When you press the trigger, you get an electronic bang and a burst of red laser light. The sights are better than the plastic sights I’ve seen on the most popular laser training guns.

I have to tell you first off; I was very excited that Smart Firearms heard me and fixed their first version’s one glaring downside, a tactile trigger break. Ver 2.0 has it. That alone took this training aid into the same league as the most popular laser training pistols in the market.  They also offer a wider variety of gun models in a laser training pistol format than any manufacturer I know of as well as visible and IR models.

The advantage of the IR model is especially important for scenario training. I believe the laser “splash” of a training pistol gives a shooter more feedback than a real gun. Their downside is inexperienced shooters adjust off the laser splash vs. learning to use their sights.  IR laser pistols require a better understanding and practice of shooting fundamentals for the new student.  The downside is one doesn’t get any visual feedback from a visible laser.

The laser burst vs. constant on when trigger pressed is Smart Firearms’ cut on the laser training pistol.  It’s a two-edged sword for new shooters but a wash for those that understand aiming. New shooters who aren’t aiming properly, often hold the trigger and move the laser to the target. Depending on the instructor, they may never figure out they are aiming improperly.  I deal with this by telling the student NOT to move the laser to the target. “Look at how your aiming, your sight picture and change it to address the issue.” The constant on laser though does make it a little easier on me as an instructor.  This is irrelevant to the seasoned shooter.

The same result can be achieved with using the ATLP’s laser pulse.  One just must review what a proper sight picture looks like with other training aids.  I just demonstrate using my hands and explaining the blade and notch relationship between sights with my fingers.  The caveat is the student must be primed to pick up that laser burst, take a mental picture and fix their aiming issue (sight alignment, sight picture or both).

Where the ATLP shines above every competitor is in its accidental discharge sensor.  I have come to appreciate it MUCH more after teaching several thousand brand new shooters.  The sensor picks up a finger placed inside the trigger guard for more than about half a second and is not pressing the trigger. The errant shooter is rewarded with a loud and jolting buzz and a yellow warning light on the side of the gun.

Three years ago, I frankly didn’t realize how important this was to training new shooters.  I can attest that teaching students safety is easy.  Making sure they listen and do it isn’t. All too often in the excitement of actually firing a gun (maybe their first time), I have seen and stopped numerous students from putting or keeping their finger on the trigger when they are not shooting.  Personally, it’s most disconcerting to me when a “seasoned/experienced” shooter does it.

These shooters sometimes have a bad and dangerous habit so ingrained or are convinced of their own competence, that remedial training is “difficult”.  I can say the ATLP is worth every penny for that annoying buzz. It stops the aggravation and argument with the stubborn student.  Each errant student gets an immediate and impactful negative stimulus that they are doing it wrong.

For that reason alone, I’d encourage every instructor of basic shooters to have an ATLP.  If you are doing large numbers or instructing for a living, you must have one.  It stops the argument better than video and makes a bigger impact.

Another feature of the ATLP are lights on the side of the frame that light up green for a shot and yellow for a lazy trigger finger.  From the side of the firing line, it makes it easier for an instructor to manage what shooters are doing on the shooting line.

So, if you are in the market for a laser training pistol ATLP is one of, if not the best answers out there. Given current and rising ammo prices, you can’t not have one.  Not only does it provide one a lot of valuable dry fire training, Smart Firearms offers the widest assortment of guns to mirror what one is actually shooting. It’s compatible with low end and high-end training with an IR option.  Most uniquely, the ATLP offers the student an impactful stimuli to develop a disciplined trigger finger.