IMITTS 3 Pack.  Photo by Will Rodriguez

I believe Laser Ammo’s Interactive Multi Target Training System (IMITTS) is the best laser based target training tool out there.  The system has the ability to exercise an incredibly wide range of shooting skills for the target, competitive and self-defense shooter.  The ability to add targets allows shooters to easily create their own indoor range to specifically meet their needs. 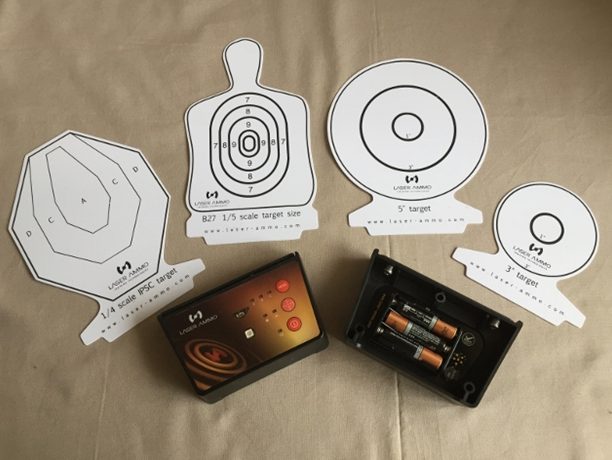 IMITTS. Photo by Will Rodriguez

Each IMMITS target consists of a base unit and one of four backings that slide into a rear slot on the base unit.  The backings serve as a reflective surface for the base unit to pick up a hit as the laser reflects of the white surface.  Targets mimic USPSA/IDPA, silhouette and large and small plates at a reduced scale.  Targets are generally five by three inches except for the smaller plate and printed on white plastic board.  The base units have buttons to select up to five different modes of operation and each base unit can communicate with up to ten other base units for more advanced modes.

The five modes of operation are:

The base units read Laser Ammo specific emitters.  I used Laser Ammo’s excellent Pro Laser training pistol which I reviewed earlier here.  Laser Ammo produces a wide variety of other emitters though if you want to use your gun or a compatible airsoft gun.  One type plugs into your existing gun and is available in the most popular calibers all in one box including a boresight.  They also offer airsoft friendly systems.

One would think that lasers are lasers and any laser would work but the issue is more complicated.  Laser Ammo also offers IR laser emitters.  IMITTS base units are encoded to read Laser Ammo red and IR lasers.  Other higher end training pistols like Next Training’s SIRT have the ability to be read by IMITTS and the companies are in discussions to hopefully make that possible but right now you need a Laser Ammo emitter to use IMITTS.

Out of the box I wasn’t too impressed by IMITTS but boy was I wrong.  Once set up the system is addictive and will wear you out especially in the “Double Speed Shoot/Don’t Shoot” mode.  Set up is super easy.  Install batteries, select mode, slide the target in the slot and train.

The base units don’t work as well in bright sunlight, and are sensitive to going off to “laser splash” from a near miss reflecting off a nearby surface.  That is actually a double edged sword.  One can overcome the splash problem by not placing the unit too close (more than 12”) to light colored walls/backgrounds.   A make shift cardboard shroud fixed that minor problem.

The other side of that laser splash over-sensitivity is a good thing.  In the event you want to use life size targets you actually can.  Placing the sensor up against them (I made a shelf at the bottom of the center mass “A” zone area on an IDPA target) and start shooting.

A full size silhouette hit might not always set off the sensor with a hit on the margin but I think that’s a plus.  It forces you to shoot more than once to get the feedback you want which is more realistic when it comes to shooting a person.  This unintended advantage allows you to even create more life size targets as you turn your home into a potential shoot house.

I must say the system is incredibly versatile.  As described above the modes provide a huge capability to practice a wide variety of skills.  Basic marksmanship practice is obvious but by purchasing multiple units you can get some real practice transitioning between targets.

The ability to “grow” your target array is where this system really outshines other systems and really offers something unique for competitive and self-defense shooters.  One could easily turn one’s home into a shoot house or complicated IDPA/USPSA stage.  My target system picked up hits out to 15 yards.  Targets can be placed up to seven yards apart for interactive shooting modes.  Standalone modes can operate independently for that multi-room/story scenario.

A real plus to this system is you can place targets in a 90 degree angle or more from each other forcing you to make wide transitions between targets and keep your head on a swivel.  Many ranges don’t give you this level of flexibility. It’s a great capability to practice competition and self-defense skills.

Further, the targets can be employed together in different modes. For instance one can leave a target in standalone mode while using the others in more interactive modes.  They won’t work as seamlessly as putting them all in a specific mode but the uncertainty can be helpful.  Just remember green means shoot.

The one downside to the system is for the shooter looking for precise feedback. A hit anywhere on a backing is equal to a hit.  A hit on the periphery of the targets that come with the system is the equivalent of a center mass or head “A” zone hit.  This is easily remedied with some cardboard wire and tape to make coin sized reflective surfaces to raise the difficulty level.  One could easily mount these targets inside regulation cardboard targets for increased sensitivity to “A” zone hits if that is what you want to train.

A very short and partial list of things you can train on with this system are:

A single system costs around $100 but you save $50 buying a three system set or $150 with a five system set.  As I said, IMITTS is the best laser target training systems out there for the individual shooter or professional trainer.  It’s affordable, incredibly versatile in training a wide variety of shooting skills and super easy to set up, take down or expand.  The system’s value is only limited by the shooter’s creativity.