A Vietnam Veteran’s hope to find the final resting place of a friend found and lost in combat. 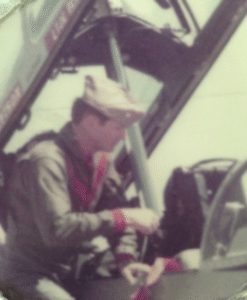 “I went to The Wall once in the 90’s and I didn’t want to go when I went,” stated Commander Rich Richards, US Navy (Ret.), “I wanted to wait until I got everybody and could visit them all at the same time. There was still one to go and that was John.”

Richards is referring to the list of service members he knew who were killed in Vietnam whose names were etched on the Vietnam Veterans Memorial Wall. The Wall in Washington, DC is a monument dedicated to the 58,286 men and women who were killed in Vietnam from October 27, 1957  to May 15, 1975. Spanning 246 feet long in granite, the Wall is a place of remembrance often too difficult for those who served during the Vietnam war to look at. For some the Wall is a painful reminder of lost friends and the one place that brings honor name by name for all who gave their lives during the war. Richards still had one name he had not yet added to his list of friends to visit. With no known Killed in Action (KIA) date and no last name to put to this Marine, Richards struggled to come to peace with the passing of his friend found and lost in combat.

In May of 1966, Richards graduated from flight school and commissioned as Ensign (ENS) in the United States Navy. He was assigned to Agana, Guam in July 1966 as a Navigator with the weather squadron flying recon missions for typhoons. Within 2 months of graduating flight school, August 1966, Richards had been deployed to Sangley Point Naval Air Station, Philippines, to fly combat missions into Vietnam while awaiting the construction of the air base in Chu Lai.

By February 1967, Richards was assigned to VW-1 squadron at Marine Corps Air Station (MCAS) Chu Lai, Vietnam. As a Navigator on an early warning radar aircraft WC-121N (Warning Star), his mission, along with a crew of 30, was rescue coordination and recon for aircraft shot down.  Their radar capabilities enabled them to provide surface to air missile (SAM) alerts and warnings. He would also make trips back to Guam with a layover in the Philippines for refueling. Most were 15 hour flights every other day. 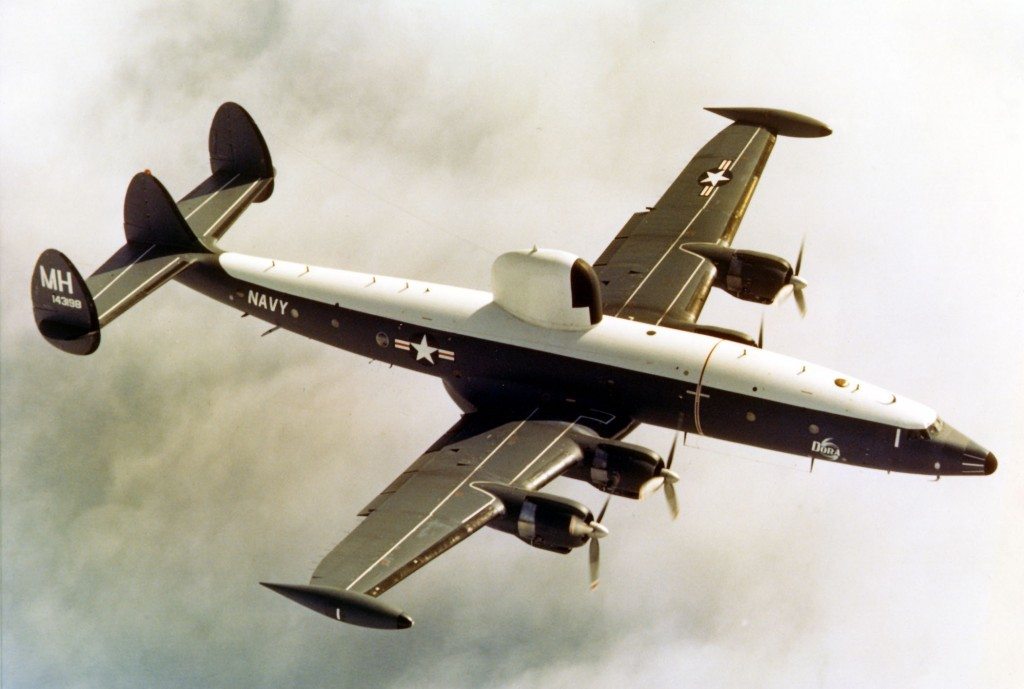 “The business I was in was failure after failure,“ He stated, “ The successes were few and far between.  We could have done better, somehow. A little better organized. I don’t know. We were all willing to take the risk to save them from the Hanoi Hilton.”

Formally named Hoa Lo Prison, the “Hanoi Hilton” was a Prisoner of War compound run by the enemy, North Vietnamese. It was often filled with downed pilots and crew captured after a crash or being shot down.

Once on the ground pilots had to scramble to hide from the enemy and avoid being captured. It was safer to land in the water to avoid the risk of being captured.  Richards thought that GPS (Global Positioning Satellite used in current military operations) would have been great! All the pilots had were PRC survival radios for communication and a map with terrain association to guide rescue parties to their location.

The commander of the United States Marine Corps (USMC) Air Wing out of Okinawa was a Colonel assigned at MCAS Chu Lai. For some reason he had taken a liking to Richards. Whenever the aircraft returned from a recon mission the Colonel didn’t want to talk to the flight officer in charge. He went straight to Richards, the lowest ranking officer still an Ensign.

On one occasion there was a big raid with three to five Marine aircraft shot down. Approximately 10 Marines total. The Colonel came to Richards for a debriefing. His reply, “We didn’t hear from anyone. Everyone presumed dead.”

After the debriefing the Colonel asked Richards if he stopped by the Philippines on his route to Guam. Knowing how rooted in religion the Filipino culture was, he asked Richards to pick up a rosary for him during his next layover.

On another night an aircraft had been shot down with 2 airmen on board. One had injured his leg forcing him to hide due to immobility. The other pilot climbed to the top of a hill to use his PRC radio to call in a rescue.

“Their call signs were Twerp 1 and Twerp 2,” Richards said, “Aren’t those just awful? You could tell by the call signs they were Air Force. I told the uninjured pilot that he needed to talk us into his position.”

The uninjured pilot talked them in and began to panic. Richards recalled the conversation. “’Don’t leave me. Please don’t leave me. My life is in your hands.’ He said over the radio.  I had to calm him down. I told him, ‘I know. I know. We are not leaving you. We are going to be here all night.’  We talked to the Air Force and they were able to find help from a rescue team out of Thailand.  Their helicopter was shot out. Leaking fluid, the Thai helicopter got out of there. The pilot was distraught. I told him, ‘Hang in there. Hang in there. Be quiet. Every hour we will click the mic 2 times. When you hear us give 2 clicks back. Before sunlight, before daybreak when the helo can fly we’re going to get you out of there.’ Sure enough at 5am the helo got in there and snagged him leaving the injured guy behind. One of those ugly calls.”

As they flew away an A1 Sky Raider (Sandys) gave him the coordinates of where they thought the injured pilot was along with enemy forces nearby.

Richards recalls the uninjured pilot yelling over the radio, “That’s it! That’s it! Yeah! Yeah! Hose them down!”

They completely obliterated the enemy with their 30mm canons. Richards considers this as one of the few success stories even though he never knew what happened to the injured pilot. The airman was later classified as Missing in Action (MIA) and presumed captured by the enemy. 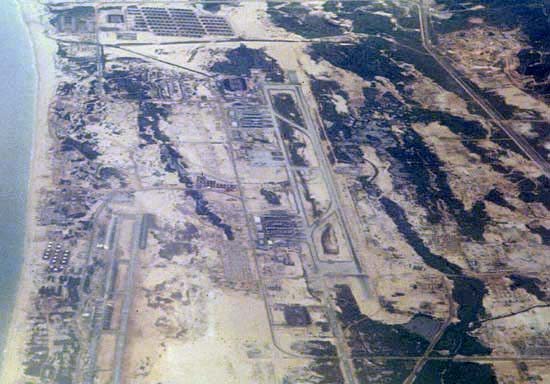 MCAS Chu Lai had received significant damage from mortar attacks. His air craft was redirected to run missions out of Da Nang for a while during repairs. Once back at MCAS Chu Lai he was happy to have the security of Marines.

“Once Marines were mortared they moved so fast with the sounds of guns. You felt so good and safe. If you’re going to war, go with the Marines, “ Richards said.

There was a Marine squad leader guarding the perimeter of Chu Lai to keep the enemy out of the Marine Corps Air Station. The Colonel came to Richards for a favor. He asked if Richards could take the Lieutenant in charge of perimeter security back home on his next flight to Guam. This was the first time Richards had met John.

“My first impression of John was that he was just another grunt,“ Richards laughed. Standing about 5’ 11” with dark hair and a strong build, John was very professional.

John had a wife with two daughters approximately 1 and 3 years old living in Guam. Richards’ wife Linda was also in Guam with their daughter and a newborn son by this time.

Every time the Colonel asked Richards to take John home he’d reply, “Nothing in the way sir. Get him over here. Is it OK if we have a couple beers on layover in Sangley Point?”

Richards had flown John on 4 different occasions to Guam and John would catch a flight back with another air craft.  “He was depending on me to get him home and make sure he didn’t get bumped,” Richards said, “ But I wouldn’t have let that happen. I would have challenged a General over a spare seat. I would have embarrassed a General to get him on my flight. I was bound and determined to do whatever I could.”

An entry in Richards’ flight log shows that on May 3, 1967 Richards had flown a Lockheed L1049 Super Constellation from Guam into Japan returning May 5, 1967.  Recalling this flight he said, “We were in Guam with our families. John asked me if I could take him on a special trip to Japan to get the ‘biggest damn speakers’ he could find. We didn’t tell our wives that’s why we had to go.”

Back at Chu Lai Richards had come in from a mission when the Colonel came to him. He said that he needed Richards to take John home one last time.  Eager to help as usual Richards agreed.

“Well it’s going to be a little different this time, “ The Colonel said, “John was killed on patrol a couple days ago. I want you to be his escort and make sure he gets back to Guam”

“It was a shock,” Richards said, “Brought me to my knees. I cried. I didn’t think I would ever cry in that war because I was so angry. All I could think was oh my god I don’t even know his wife really. John and I would just split when we landed. I would go to my intel brief and he would leave with his family.”

The Colonel said, “You don’t need to be the Casualty Assistance Officer. John is deceased. Stay with him. When the plane is refueled, stay with him.  Take him home.”

“I can do that,” He said. As the Navigator, Richards sat in the middle of the air craft. From his seat he could see John’s flag draped casket strapped down. “That image is engrained in my mind like a photograph.”

Richards can’t recall the date he and John met, what his last name was or even the date he was killed in action.  When asked why, he said that he wanted to forget it.

Richards has searched on the Virtual Wall. He has searched a lot of records, especially in Guam. John could have been posthumously promoted to either First Lieutenant or Captain.  John might even be his middle name. His possible KIA date would be between May 1967 and June 1968. His daughters would now be around the age 50 and 53.

Commander Rich Richards is hoping to find information. When asked why it is important for him to find John he said, “Closure. I hate the word.  I’m kind of stuck here. There are other people I want to visit at the Wall, but I feel like I can’t go back yet.” 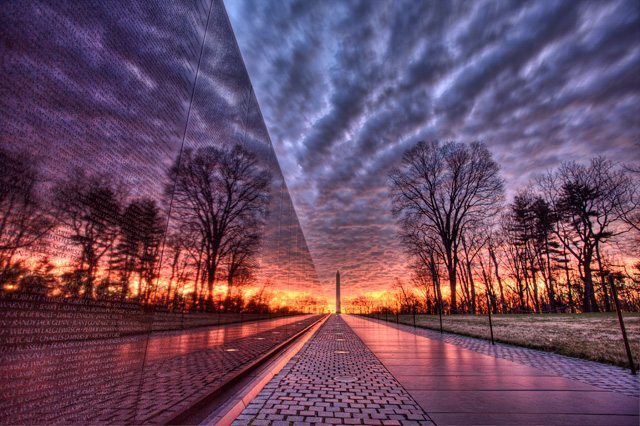