In today’s market there is a wide variety of weapons to look at when considering an AR platform; from building your own or buying one stock. Heritage Arms has come up with a nice option to ease the pain when looking for a good rifle at a great price. The Patriot rifle, designed around the AM platform, is unique to Anderson Arms and makes a great entry-level weapon.

Out of the box the weapon looks quite impressive. The first thing I noticed was the 15 inch Keymond hand guard. This gives the Patriot an aggressive look that’s sure to appeal to most shooters.

The hand guard houses the standard 16″ barrel afforded to civilian enthusiasts, leaving the Birdcage flash hider all that is exposed of the barrel itself. Working towards the back of the rifle, it features a Phoenix Technologies 6 position collapsible butt stock, the same variant of butt stock common to most of the entry-level AR’s you’ll find today. It also comes optic ready, providing plenty of room to mount your choice in optic, from red dots to longer range variants.

As promised on the Heritage Arms website, they are “the Worlds only no lube rifle.” So I put this to the test with 300 rounds of .223 and 5.56 mix, straight out of the box.

I mounted the Vortex Strikefire 2 red dot optic. The first 10 rounds were spent getting the zero dialed in which was a simple task. The Patriot proved to be a capable weapon immediately, despite the reduced recoil associated with smaller calibers, the Patriot was able to dissipate it much better than other AR’s I’ve fired. I did some supported slow fire, a bullet every 15 seconds at a distance of 75 meters. During the slow fire I was able to keep a tight group. The weapon operated extremely well for the entirety of shooting and I experienced no malfunctions with the cycle of operations. 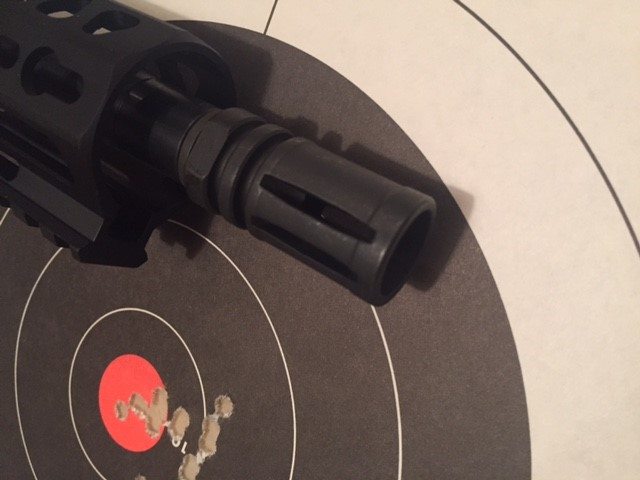 I ran into one issue during the slow fire, when extending the butt stock multiple times. It failed to lock in place, releasing each time I fired because of the recoil back to the collapsed position. I spent the rest of the day firing with it in a collapsed position, it wasn’t too uncomfortable just not preferred. This is an easy fix if you have the right tools when you experience this discrepancy, I don’t expect it to be a common trend with the AM-15.

I spent the next couple hundred rounds doing an assortment of drills: speed reloads, tactical reloads, hammered pairs, failure to stop drills, etc. The whole time I did not experience a malfunction. The weapon kept to it’s promise and out of the box performed excellently. Another thing I really appreciated was the magazine well. I tend to use P-Mags when firing and I’ve experienced difficulty with fitting them in some other weapons. The Patriot would free the magazine when the release was depressed and quickly loading the next magazine was simple, allowing for smooth transitions all day. Overall, the weapon performed great, it was a good day spent on the range with a weapon I truly enjoyed firing.

Here are some specs on the Patriot rifle: