When it comes to body armor these days, there are a lot more options to choose from than there used to be. Along with that is the publics general knowledge about National Institute of Justice (NIJ) ballistic standards for both soft and hard armor.

While this increase in options and knowledge has grown, one area that is still limited is the availability of low profile or low vis soft body armor. Often times what is touted as concealable body armor results in a profile that looks like a person wearing body armor under their clothing. However, Premier Body Armor has designed level IIIA soft body armor panels that work in conjunction with the Tru-Spec 24/7 concealment undershirt that is nearly imperceptible to an observer and is also comfortable enough to wear all day, every day.

Before going further, it bears stating up front that this model is as bare bones and low profile as one can get. Because of that, it is obvious that there are areas of the torso that are not covered. If your situation dictates a classic coverage type of vest, then you should look at Premier’s Discreet Executive vest, as it provides a larger torso coverage area to the front, sides and back to the NIJ Level IIIA standard. Think of the 24/7 Concealment shirt as a plate carrier and the Executive vest as a normal body armor carrier that provides maximum coverage. Your mission and the threat should dictate which one best suits your needs.

BLUF: I recommend this product and found it to be useful and well made for those looking for ballistic protection in a minimal signature product that can be worn for long periods of time.

I chose to use the white colored undershirt for this evaluation for two reasons. First, it goes with most/all casual and business clothing, as it looks like a white T-shirt. The second reason was for photo purposes for the review, as black items can sometimes be difficult to see the details of an item in photos. I would recommend that one buy several of the Tru-Spec shirts in whichever color(s) that you think you’ll likely wear the armor in, especially if you plan on wearing the armor every day, for several days in a row. I say this after doing a six plus month review of this product and wearing it just about every day for an 8 hour plus day. As such, I ended up washing the one undershirt a good bit, as its meant to be worn as an undershirt and not over another shirt. I can say that after this type of use and washing, that the shirt and the armor panels are still holding up well. It helps that the undershirt is antimicrobial and moisture wicking and made up of 85% polyester and 15% spandex compression materials. 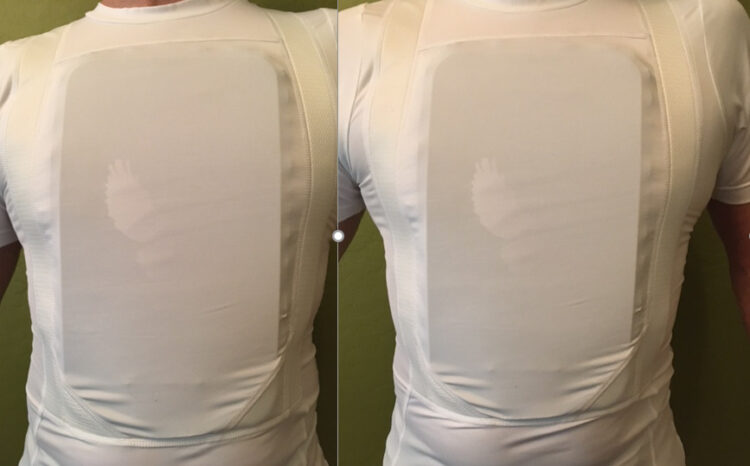 The undershirts are sized 1/2 size small for extra compression to keep the ballistic panels secure against the body and from moving around. While the undershirts have spandex in them, they aren’t as tight as most compression shirts, so don’t expect to be squeezed excessively. I found the undershirts to be a comfortable replacement for a normal T-shirt in both casual and business attire. I didn’t find the inclusion of the panels to be too hot during physical activity, even in a western desert environment. The undershirt is also sufficiently long, so there is no issue with it creeping up during use or physical exertion. From multi hour drives in a vehicle to multi hour meetings in a conference room, I didn’t find any detractors, but more importantly, those around me didn’t notice that I was wearing something under my normal clothing. I will emphasize this part, as most have become accustomed to wearing shirts or clothing larger than typical to accommodate items like armor and or firearms related items. I wore my normal clothing and unless someone gave me a hug, none were the wiser that I had armor on. In fact, after having stood and spoken in front of several LEOs during a class, I asked how they liked my armor. None had determined I was wearing it, until I mentioned it.

Now, let me shed some light on the things I found to be places to improve on or were minor inconveniences. First and foremost, donning and doffing the shirt with armor in it is a bit awkward. You have two semi rigid pieces of armor and a super flexible spandex shirt that you will have to swim your way into and out of. I don’t think it got any easier over time and use, but it is by far the only thing I found to be an inconvenience and a minor one at that.

The pockets on the undershirt that hold the soft armor are well made and on the interior of the shirt, closest to the wearers skin. The soft armor is well sized to fit the pocket(s) and while movement while in the pocket is very minimal during use, it would be a good idea if they were to build in small “hoods” or pockets to capture the top corners of the armor plate, once it is inserted into the undershirt. My initial fear was that the plate would get pushed upward and slide out of the pocket during use. While this never happened, there still remains a small amount of wiggle that the additions of the hoods or pockets would eliminate entirely.

Other than those two things, I found the undershirt to be well thought out and capable of holding the armor where it needed to be throughout a wide range of activities and over time and prolonged use.

The PREMIER 12 x 7 PHOENIX soft armor plates are made in the USA and sized to fit the undershirt, and once inserted, have very little movement as described earlier. The construction and covering of the armor is very well done and after inspecting it, I didn’t feel like it would be an issue to be concerned with after prolonged use.

Meeting the NIJ rated standard of IIIA , each panel weighs approximately .8 of a pound and are .22” thick/thin, bringing the whole package of armor and undershirt to around 2 pounds. Which means it is capable of defeating pistol rounds from 9mm, 40, 45 and 44 magnum and has been special threat tested against 12 Gauge (buckshot and slug), Liberty Civil Defense 9mm and FN 5.7×28 (SS197SR).

While the PREMIER web site states that the armor panels are stab and slash resistant, the ones I was sent for the evaluation were not rated for this, as noted on the data panel on the back of each piece of armor. 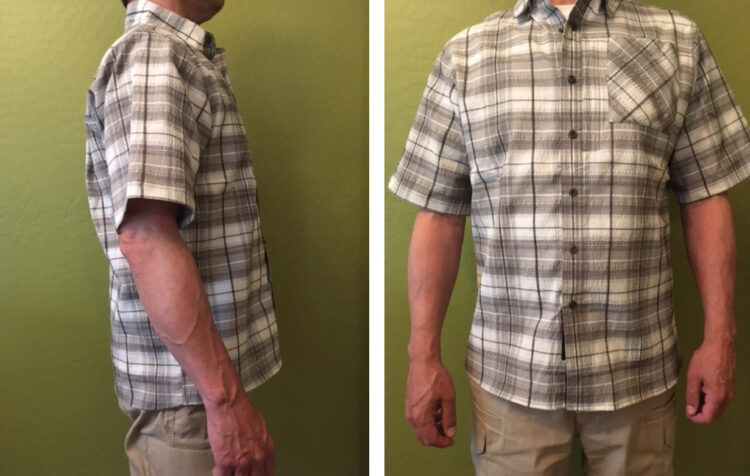 Another benefit I found that is secondary to this item’s use, is the soft armor panels uses when not being worn in the undershirt. Given their shape and size, I found that I could easily insert these soft armor panels in my backpack and or messenger bag and have ballistic protection that again, was not obvious to the rest of the world.

I wore this armor while in casual polo/T shirts to full business suits without issues and recommend it, as long as one recognizes its minimum coverage. The 24/7 concealment undershirt and PREMIER PHOENIX IIIA soft armor panels offer an ideal solution for those who have a requirement for body armor that is very low profile and hard to detect when worn under normal clothing. The purchase of additional undershirts is strongly recommended if one intends to wear this on a day-to-day basis and or one perspires a lot, as it is worn right next to the skin like a normal undershirt.