What surety do I have in my double life as my vehicle hurtles across lanes of hardball and sand. I create and maintain a separation between myself and the world outside because I know this stream of existence may bring us together while I scan the dirty enclaves of desperate men. It’s important to keep the right frame of mind but the only thing that runs through my brain is, ‘so many flowerless pathways where weeds grow instead.” This world brings a mirthless wonder but soon enough I want it to feel all of my joy.

The light crinkles across my face as I shoot past carrion which rots in the road. It’s dangerous to drive here because of the IED’s. A week ago a team was hit ‘bang on’ by an RPG; sneaky fellows climbed through alleyways of dirty stone, took their shot and disappeared. This is how the war is fought, with shadowless men hiding like cowards under a burning sun. Erie soldiers in this sequestered city drift like a cremation thrown into the wind and the devilish hopes of the walking dead hang like evil upon every single breeze. They try to wall in the common man, they try to box in the average Joe and we need to school ‘em on how to break right through. I understand that it’s scary for a farmer to fight right back but when are they going to turn up the temperature and make their low spirit rise?

Just last week Haws team found a dead goat in the road. They had to stop and call in the EOD. Some kindhearted genius decided to dress its guts with pretty, red wires but it was nothing at all. Just a ploy to distract the mind and perhaps the real bomb was up ahead, but never blew. They do this you know, set people up to fail; it’s War! The kooks back home blame us all while the cretins intentionally kill women and children. But please understand, everyone’s just ‘misunderstood.’

The heat pulses overhead. I can feel the sweat on my brow. My eye pro fogs up just a little bit. I’m pushed up against the drivers’ wheel and my back is aching. Too much friggin’ gear! But this short adventure keeps me primed and I’m alert and alive.

He draws the gun and turret round and lines the mouth of the barrel into his intended lane but there’s no threat there. He just got scoped, the lone man pushing his broom and with Rojo at the gun, he’d be sweeping up his own brains rather than a handful of dirt. Every city block seems like the last one we passed; just as common as suburbia back home; streets, houses, children. I don’t have much time to pay attention because my focus is on the road. 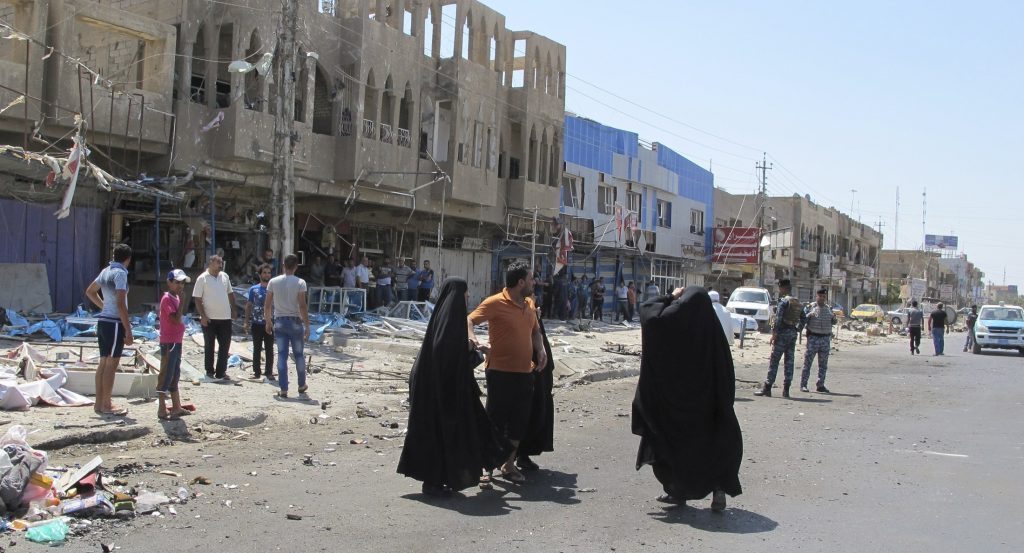 This City is cut right through with driving lanes, just like any other place on earth. And where traffic stops we jam right through. We make our own way, ride over the curbs and against the grain, and from my viewpoint I see the oncoming cars. We cruise past the roadblocks and the Iraqi Police; young toughs, old men, sunburned and smoking, listless or ready, but we trust no one.

Too often, vehicles try to mount the road but we push them aside in order to keep our convoy tight. We don’t need outsiders here. I figure that after years of an Army presence the average citizen knows to move to the shoulder when we pass through. I force them out with a simple turn of my steering wheel because I’ve got to follow the team in front of me; the LN’s (local nationals) can’t really contend with 15000 lbs of steel. We can’t be separated. Who knows what some of the drivers actually intend to do? We’ve got to keep them away from us and it’s not like we cruise Ferraris on the Sunset strip, we’ve got purpose here and we’ve got to move.

There’s a dead dog in the road. His mouth is open, his guts torn asunder, a large flap of skin spreads like a dirty, old rug. I drive around it but I’ll see plenty more, that’s not the kind of animal they keep as pets here. Freeway overpasses are a magnet for tragic stories and someone wants to see American soldiers dead. SGT Hellis scouts the base of the ramparts before we pass through. Often times it’s just a few people huddling in the shadows to hide away from the suns hot rays, but we won’t always know. We know this particular road is always heavy with IED’s. And it only takes one hit, one clown with his agenda, or well timed and fired RPG.

We go through our routines, get our rhythms going and operate just like a military machine. Sgt Rojo, our gunner keeps scanning ahead for danger, while I do the same and cut us through the hot desert wind.  Sgt Hellis keeps our heads straight and we maintain. We’re the civilized minority standing firm against a foe whose ultimate goal is to destroy the underpinnings that hold our world upright and we will deny them the mad desires they dreamed. Grief on the faces of so many men make me remember the sad streets of my long ago childhood, but that’s not now and I’m no longer a boy. I have the mature strength of a man who knows well enough when things get tough that I can make a difference in this world.