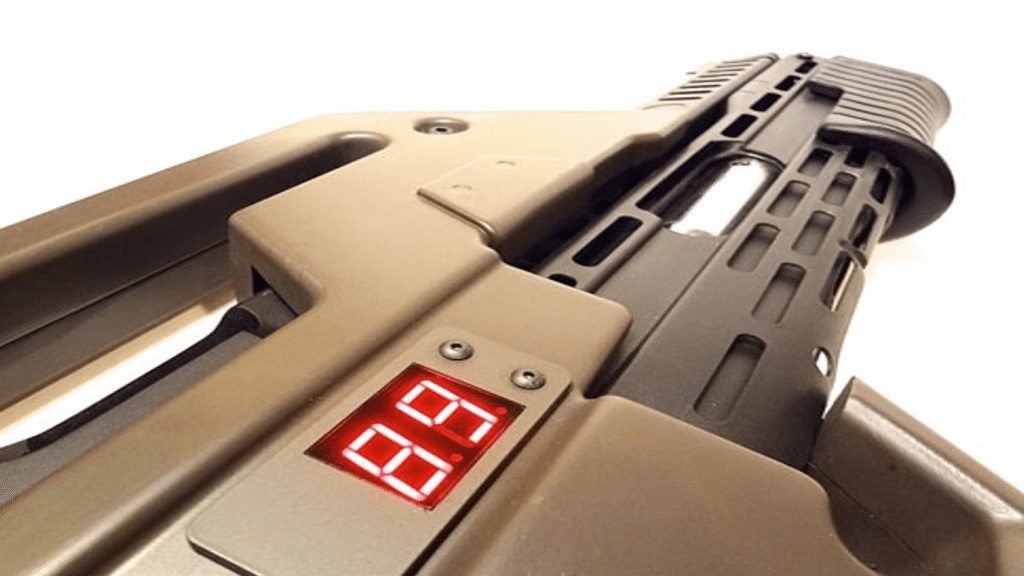 Round counters were once a dream or concept for science fiction movies.  They may have finally become a real world practicality facilitating a huge leap in weapons maintenance.  ADS and Secubit will be showcasing their paradigm changing approach WeaponLogic, at Shot Show 2017.

Since the advent of large capacity magazines, soldiers have searched for ways to keep track of how many rounds remained in that magazine.  Besides obviously trying to count the number of rounds fired, early approaches included loading the last five to ten rounds with tracer to warn the service member of a soon to be empty magazine.   Hardware solutions have included holes in magazines, clear windows and even clear magazines.

Real technology to count the rounds in a magazine seemed to only exist in movies like the 1986 movie Aliens with the M41A Pulse Rifle.  That movie actually inspired military acquisition as they developed the Objective Individual Combat Weapon (OICW).

Our military has been pursuing round count capability for decades.  As a project officer at the Infantry’s Battle Lab at Ft. Benning, the first I heard of the Army’s desire to have a round counter on its rifles was in the doomed land warrior program.  It was bantered about even more as a capability for the later objective force and future force warrior programs.  Neither program had a specific weapon identified but the capability was something that was desirable.  Using round count, the ability to forecast equipment failure was definitely part of the vehicles that made up the Future Combat System program and something round counters up to that time did not offer. 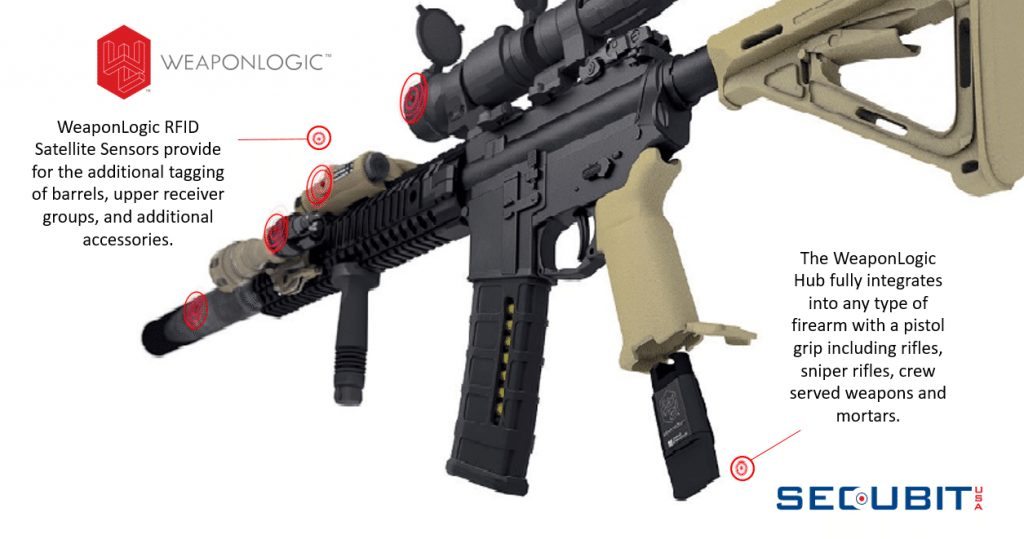 Shoot, record and tag with the WeaponLogic Hub and Satellite Sensors.

Most previous efforts have been directed at the previously described capability of providing the user information on how many rounds they have fired.   CAA produced the CDMAG AR magazine that shows the round count in the base.  Magpul installed a window in their later generation magazines.  RADETEC developed a device that sat on the right side of the pistol and counted the number of rounds fired from a pistol.  (That worked ok for a left-handed shooter but a right-handed shooter would need to tilt the gun to see the readout).  None of these approaches addressed maintenance issues.

Secubit has taken a radically different tack on the capability with WeaponLogic.  WeaponLogic’s round counter approach is not to provide the user information on how many rounds they have fired but to provide a tool for firearms maintainers to determine the usage seen by a particular firearm as a predictive tool to improve reliability.  Hidden in the pistol grip of a firearm sits a black box counting rounds dry fired, fired, the rate of fire and even the use of higher pressure producing ammo. 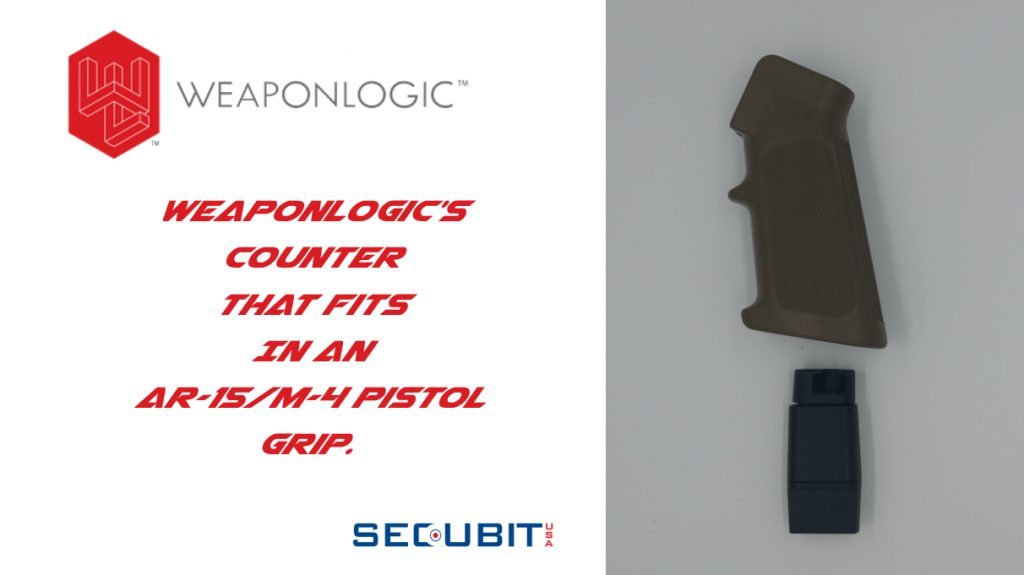 The counter is installed at the armorer level.  It fits in a variety of existing grips with more being added.  Battery life is reported at a whopping 15+ years. Each counter can capture up to a million rounds of data.

Periodically, the information can be collected in a handy handheld device called a Data Collection Device (DCD) and then downloaded to a maintainer’s computer allowing armorers to keep a much more accurate count of rounds fired by the weapons under his charge.  Previously keeping track of a weapons usage rested on super diligent users keeping track of the rounds they fired.  That’s something really only snipers typically do.  More often than not, most units relied on unit armorers to keep track of how many rounds were fired.  Often that was done by taking the ammo allocated to his unit during a training event and dividing it by the number of weapons that fired that round in his arms room.  That technique is highly inaccurate at best and in the fluidity of combat, useless. 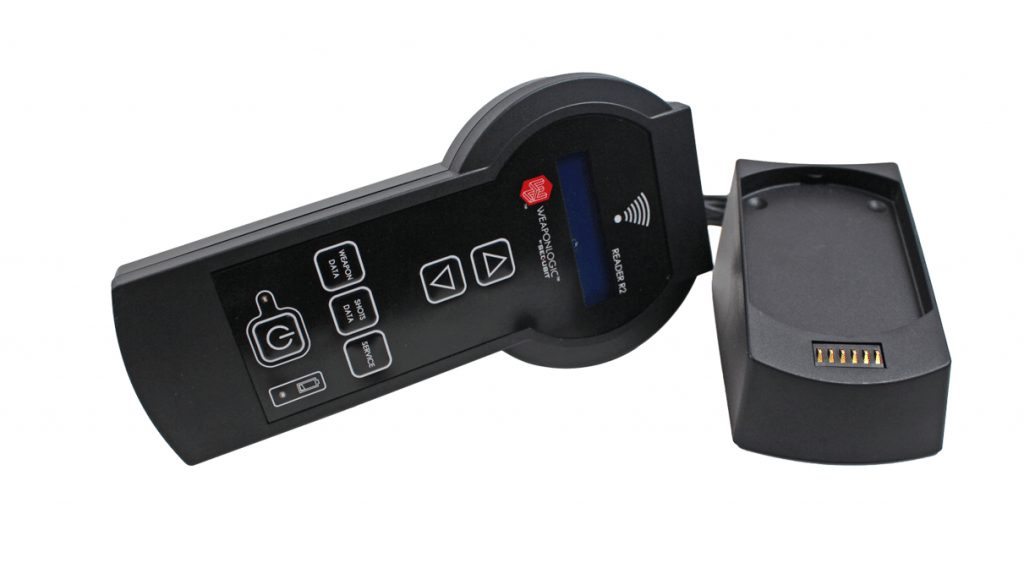 The ability to have exact shot counts and software to maintain an arms room inventory isn’t minor.  Imagine being able to replace parts before they actually fail based on their expected life versus a reported failure or worse, a casualty.  Further, used across a service, the reams of data could actually help in improving a fielded weapon or acquiring a new one before enough anecdotal evidence surfaces to cause a service to conduct a test.  A SOCOM briefing (slides 42-55) prepared by NAVSEA Warfare Center from 2006 describes the potential issues that could be addressed by such a shot counter maintenance capability.

WeaponLogic has taken the approach even a bit farther with software that allows armorers to track individual weapons’ round count, when last serviced/specific parts replaced, set mean life between failure settings by part and input specific weapon issues.  The system even promises the potential to provide feedback on ammunition performance by lot. 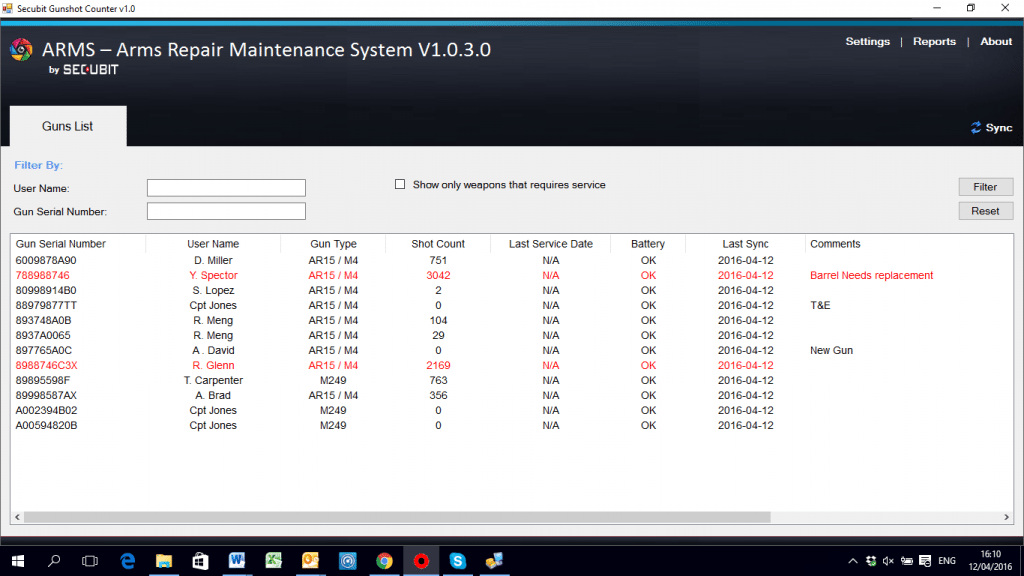 Secubit promotes WeaponLogic as a solution to last month‘s NAVSOC RFI requesting a combat evaluation.  Secubit can reconfigure Weaponlonlogic’s counter to other weapons besides the AR-15.  As a former rifle company commander with an arms room containing in excess of 250 small arms the ability to capture weapons firing data would be especially beneficial for automatic weapons. They are often a unit’s greatest source of firepower and suppression.  When they break in the heat of combat the impact on a unit is much greater than the failure of an individual’s rifle.  That’s not to say that I wouldn’t love an increased ability to better manage my weapons’ maintenance status.

During a discussion with Robb Meng Secubit USA’s Weapons Technology director, he shared the system has a timestamp capability.  It would be interesting if police departments take an interest in WeaponLogic.  Besides the enhanced maintenance situational awareness WeaponLogic provides, incorporating a timestamp function may even have evidentiary utility in documenting incidents where police use their firearms linking a timestamp to each shot.

SpotterUp will be checking out Secubit’s shot counter and software at Shot Show next week.  They’ll be at the ADS booth #20415 if you happen to be attending the event and want to see the latest evolution of the shot counter and what it can potentially do for weapons reliability.

Read our article at ADS