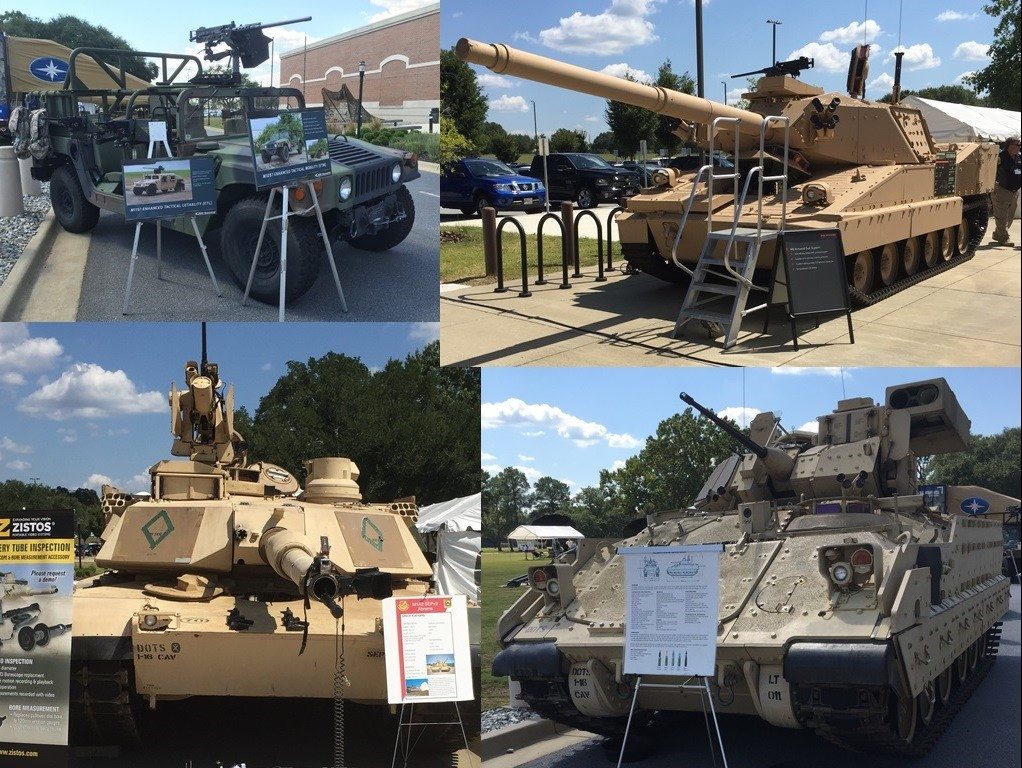 Ft Benning, the home to the Army’s Maneuver Center and the Army’s Infantry and Armor branches hosts a yearly conference called the Maneuver Conference.  The conference is an opportunity for vendors to showcase equipment the Army may be interested in as well as an event where the Army’s primary maneuver branches assess themselves, the Army and the role they may play in a future conflict.

Some Maneuver Conference Exhibits. Photo by Will Rodriguez

This year’s event was held at the post’s headquarters 14-16 September.  There were over 250 vendors present and a couple of thousand soldiers.  There were both outdoor and indoor displays surrounding the building.  I discovered at least three new companies that have developed some fascinating gear that deserve their own stories.  They include Gentex with several new items focused on headgear protection systems, Proxydynamics with a palm sized drone system and Marathon Smart Targets which has developed a robot squad to serve as advanced targets.  You’ll see those articles in the coming days. That said below are some other highlights from the conference. 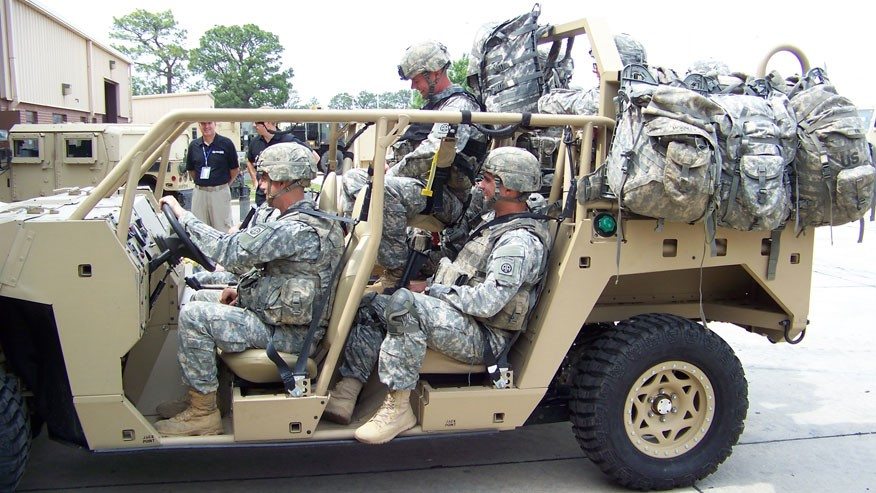 Polaris’ booth showcased the DOGAR its solution to the Army’s search for an Ultra Light Combat Vehicle (ULCV).  The Army has finally procured enough very light squad trucks for the rotating brigade of the 82nd that serves as the core of the Global Response Force able to launch to worldwide within 18 hours of notice.  This is a game changing development.  In the past, the amount of time it took for paratroopers to move to the objective (you don’t parachute on it) was dependent on how fast you could get there with all your gear.  Now airborne units can land 50-100 miles away from an objective and be there in hours.  This presents future enemies a totally different and much more complicated threat for forced entry ops. 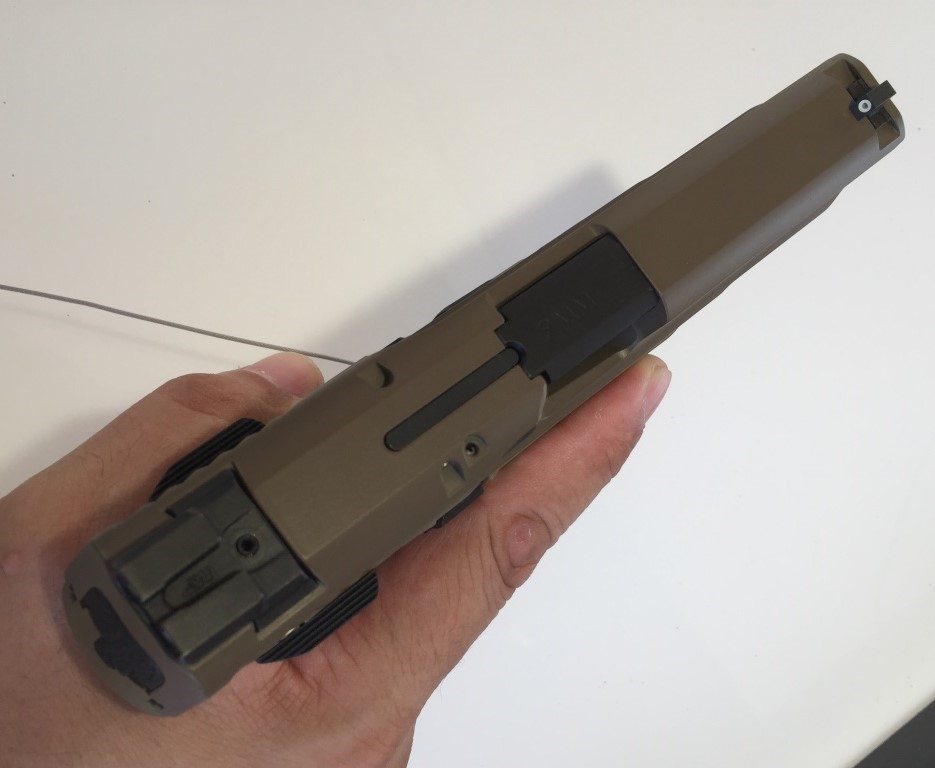 Besides its tried and true stable of handguns, Smith & Wesson also had its entries into the Army’s modular handgun system (MHS) on hand.  (Other companies competing in the MHS are Sig Sauer and Glock.)  Visually the entries differed slightly from S&W’s commercial M&P guns all sporting manual safeties.  The deep coyote brown finish was one’s first hint of something new but an added tactile “loaded chamber” indicator was more prominent.  The internals have also changed providing a very crisp breaking trigger preceded by some smith travel.  The trigger reset was also quick to find.  There were three versions on display.  The two 9mm’s were in a 4” and extended 5” version in .40 cal with a threaded barrel.  A representative shared that these much improved M&P’s will be available to the civilian sector soon.   I can’t wait! 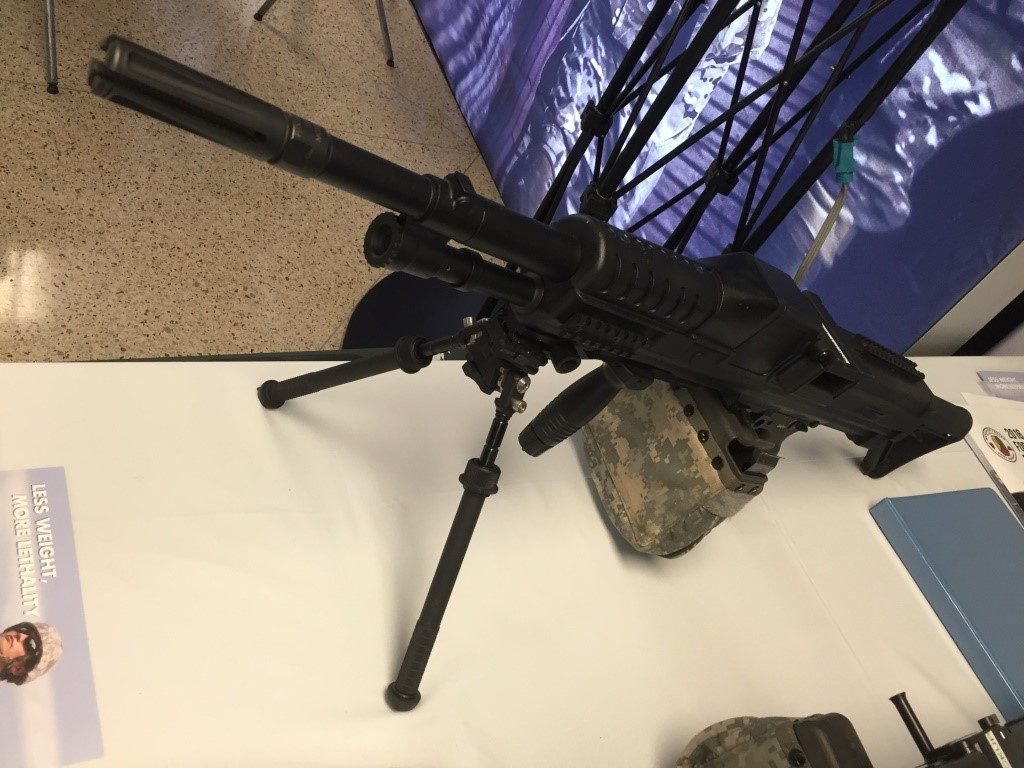 Textron is following up on its very successful LSAT program with versions in 7.62 and 6.5mm.  The 5.56 Lightweight Small Arms Technology (LSAT) featured a highly modified M249 Squad Automatic Weapon (SAW) firing their promising cased telescoped (CT) ammo which cuts the weight of ammo and the arms firing them by around 40%.  Following up on their successful SAW replacement Textron showcased a mockup of their 7.62mm version.  The 7.62 medium machinegun prototype has fired over 1000 rounds and a 6.5mm carbine is in very early testing (15 rounds).  The 7.62 machinegun weighs NINE POUNDS to the M240L’s 22 pounds!  While Textron’s SAW seems to have delivered and the 7.62 needs more testing, the Army is asking for increased lethality from the round.  To me it sounds like they are moving the goal posts because there is no money to buy.

Raydon is a simulations company that has developed some stand alone weapons trainers for key weapons like those mounted on HMMWVs and troop carrying helicopters.  The soldier stands behind a mock weapon and wears immersive virtual goggles depicting the battlefield.  The Guard has purchased them for vehicle gunner training as firing from a moving vehicle presents unique tracking and offset challenges to a gunner.  The system emulates those problems before expensive ammo and limited range time is utilized.  The Army is dragging its feet.  (Same story from my days in the service.)  Army acquisition can often slow the adoption of a good idea especially if it comes from a smaller company.  The larger companies often promise simulations that can be part of existing simulations for integration on large exercises but the promises often come in short on individual soldier training capability and high on cost.  Sadly the Army seems to be missing the boat here.  A simple cheap trainer that can be housed near the troops that can be used during down time seems to be a no brainer.

BAE & General Dynamics both had a lot of robotic wheeled and tracked cargo carriers they were trying to get the army to buy.  Some were even armed.  The same and similar concepts have been present on the last five conferences.  While very attractive to the uninitiated and desired by the grunt there is a huge problem the industry hasn’t addressed with more than promises.  Biggest issue with these is when the terrain gets REALLY tough (imagine walking through the woods and coming across a 20-30’ deep dry creek bed with sheer sides) one has to find a separate route for the robot or download the gear and send the robot to the rear or on another route with its own security element.  Mechanical mules are a great idea to lower the soldier’s load but we still don’t have systems that can keep up with the small unit.  These may have utility at higher levels though like Battalion to assist in moving wounded to the rear and supplies to a forward pick up point.

There were tons of other vendors there with worthwhile stories to tell.  I’ll be sure to expand on Gentex, Pyrodynamics and Marathon Smart Targets in the coming days.  Sadly, the budget wars seem to have had a debilitating impact on the conference with what appeared to be a third less vendors than years past and maybe a 50% reduction from what the event looked like a decade ago.   It’s a sign of the times as our military shrinks while the threat grows…