I’m always impressed when a person takes the time to make something from nothing and in this case it was Noble. Many of us lose a sense of what it is like to make things with our hands. Getting away from the keyboard or phone is something I recommend and I respect those who from time to time do it. I know quite a few people who sculpt, paint, do woodworking and they can stomp on heads at the same time. Learn to create. Enjoy this article from Noble. ~Mike, Editor 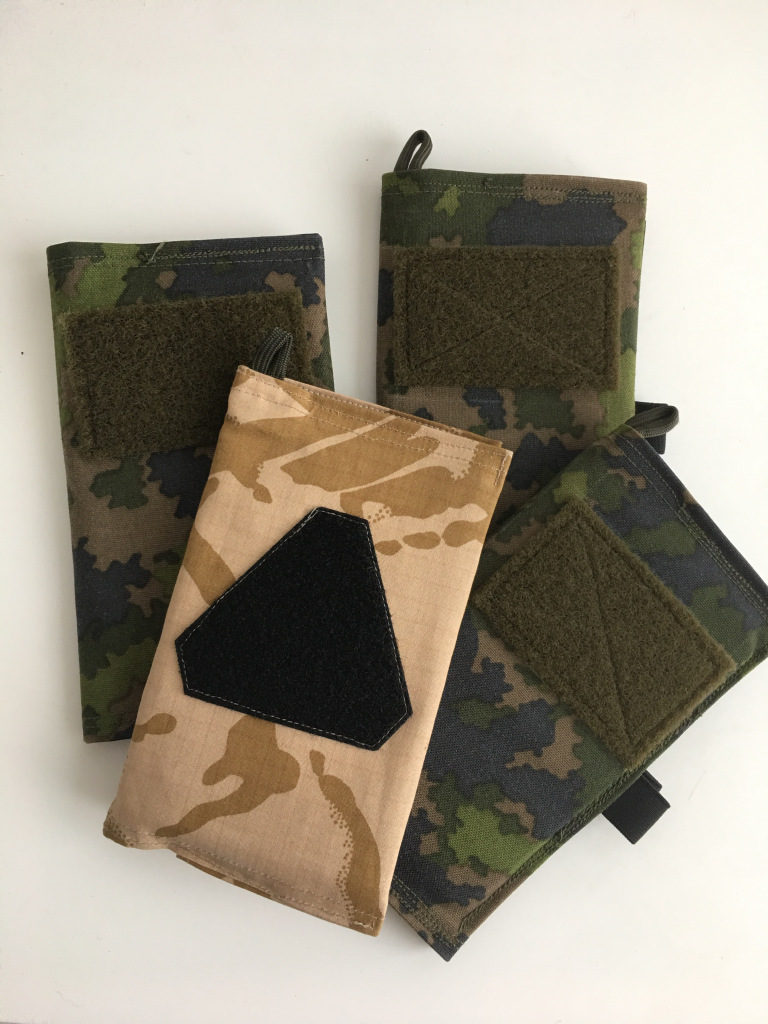 My enthusiasm for sewing gear has been steadily growing since I made the Fighting Hoodie. I have planned on making a new wind-shirt kind of top for both Blue and myself, but that project is in the long haul. Meanwhile I came up with this idea of a small Every Day Carry (EDC) pouch that can hold a Field Notes sized note book and has a large loop velcro area mainly for carrying extra patches.

The EDC Note book cover MKI I did for Blue as a Christmas present. To be honest, I was not too happy with it. The whole manufacturing process was done in a hurry as to be in time for Christmas eve and my idea and design was not without flaws.

The MKI featured a zipper on the side, but that was actually too short for the pouch. Inside there was an black elastic band to hold the Field Notes in its place, and on the opposing side there was a few pieces for the patches. My original idea was to make a few extra attachments of hook velcro and the elastic band for EDC items like pens and batteries to be attached on the loop velcro to have different options for the carry, but that plan did not come to life, at least not yet. Overall the idea was ok, but the finish and the materials were not as good as I would have hoped them to be.

Then a few weeks after Christmas, Blue came to me and said that he had been using the MKI and liked it, but that he had come up with a few ideas to enhance the design. And so the idea for the MKII was born. 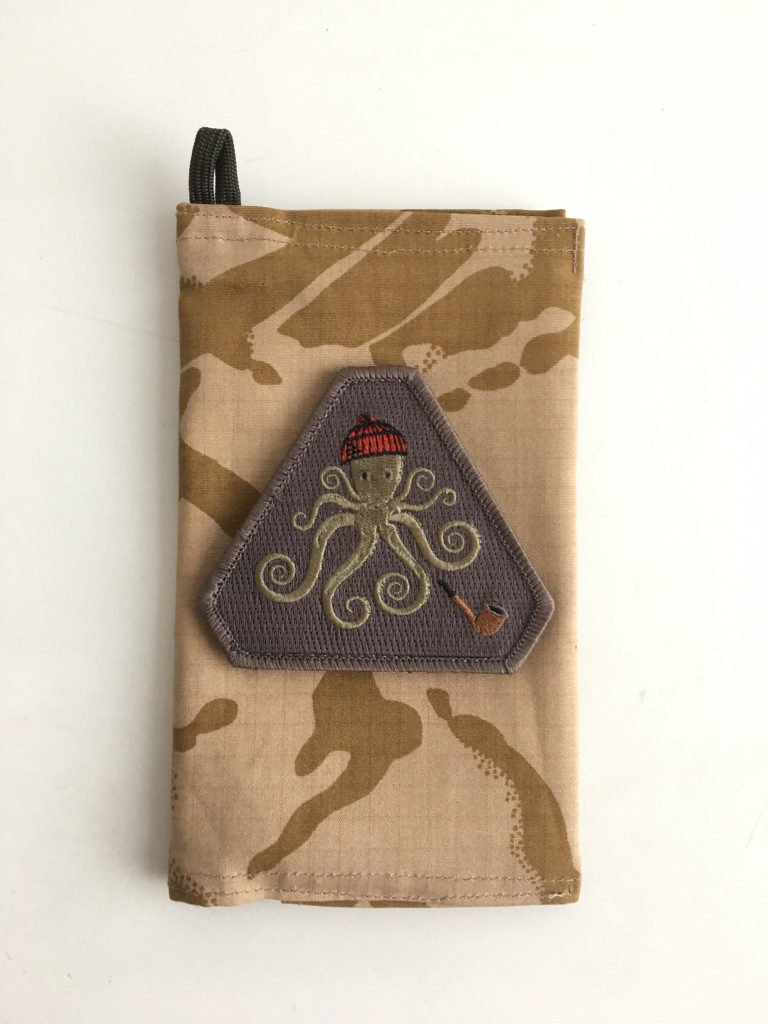 We sat down together with a few beers and drawing paper and I made a few sketches, visualized the process and after a few days I had made a prototype off the DDPM fabric I had in store. We ditched the zipper and opted for some more velcro for the closure. And instead of using two same sized pieces of fabric, I used one continuous piece to reduce the amount of sewing needed. We also added the pull tabs on the long edge and a loop of paracord on the top for attaching of a lanyard or what ever. And we agreed that the overall design was quite nice now. 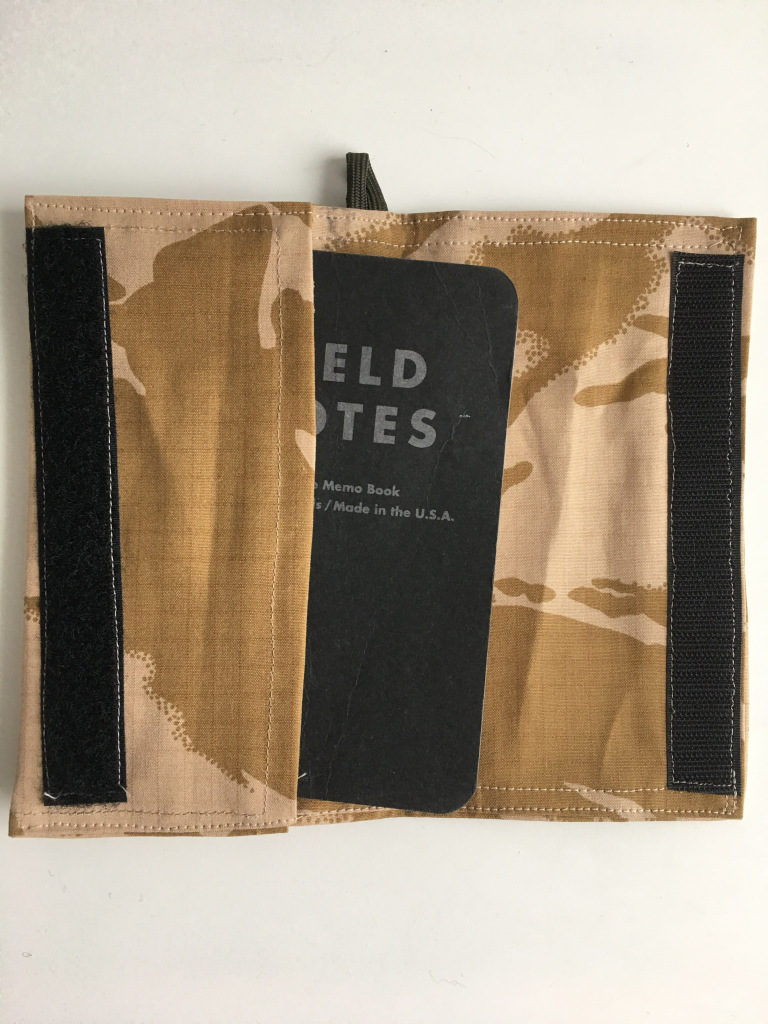 Then the idea of doing several of these and putting two up for our first GAW came to our minds and so we fiddled the design a little bit more and wanted to make the EDC cover extra nice if we were to send it to someone else to use. So we ordered some 500D Foxdura in the Finnish M05 camo from Varusteleka and some military grade velcro for it. 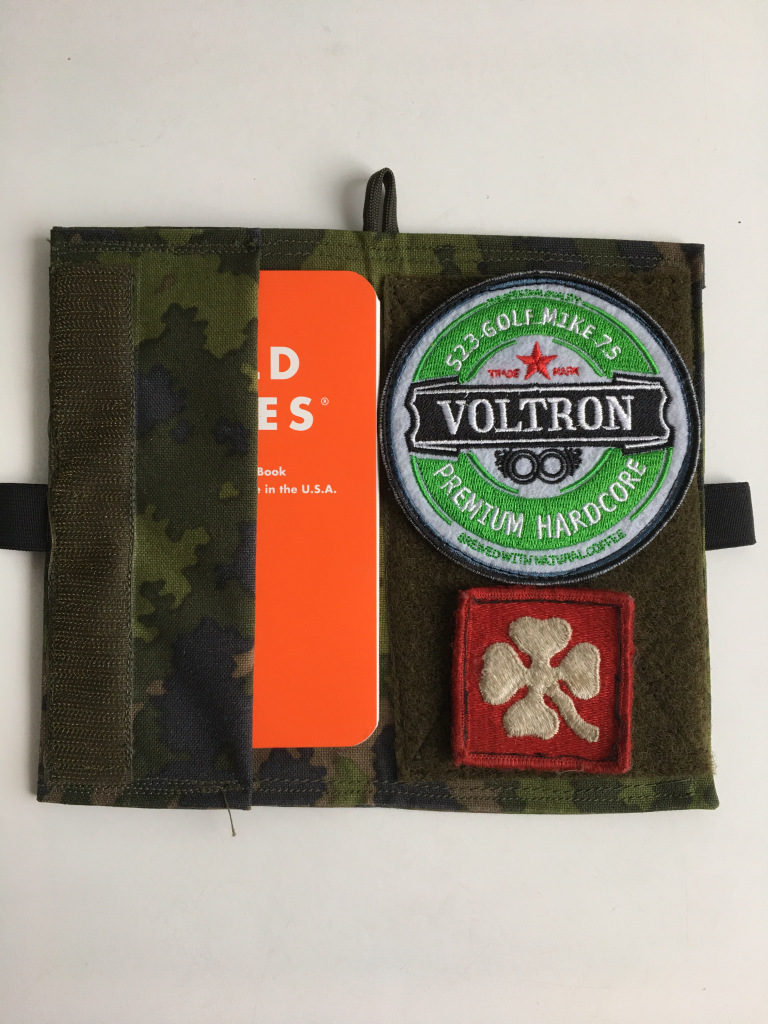 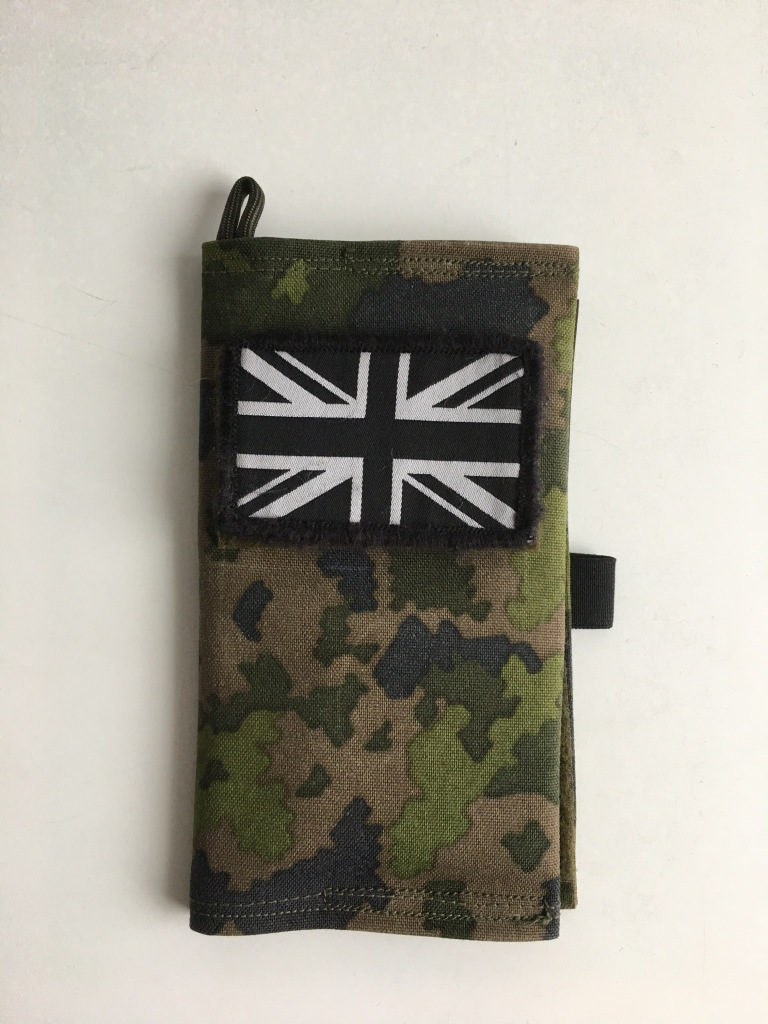 So here is a clear list of the features of the EDC Note book cover MKII as it is now:

-The outside has a flag sized loop velcro for a morale patch etc.

-Inside there is a fold for a note book

-On the opposite side of the fold there is a large loop velcro for extra morale patches etc.

-The pouch closes with a hook velcro that attaches to the large velcro.

-On the long side there are one or two pull tabs made of a loop of elastic band, that will hold a pen nicely.

-On the top there is a small loop of paracord for lanyards or carabines etc.

And that is about it. It is not much and no where near perfect, because some stitching might not be pretty, or the tabs and pieces might not all be quite centered or aligned properly,  but it is self-made and every pouch is definitely unique. And it does work. Blue has been using his M05 MKII now for a month and really likes it. I am not a professional at sewing or designing gear at any rate, but these came out pretty great, even though I say so myself. 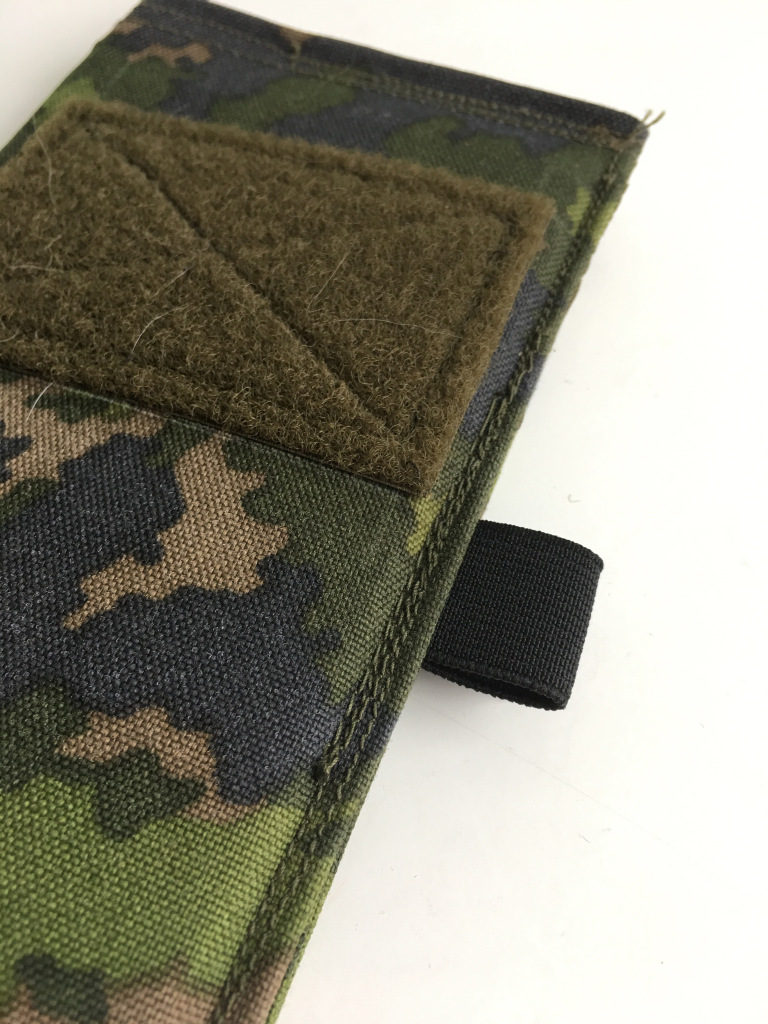 In the manufacturing of the two GAW pouches there was a few minor problems with the design. The edge of the 25mm velcro used for the closure is not very durable and in the testing of the other pouch the edge ripped. But I mended for that the best I could, by sewing so much over it, that now it should never come off. But to balance things off, the other is not perfect either. I forgot to sew the other pull tab on, so now it has only one. This does not affect the usability of the pouch much, but still. 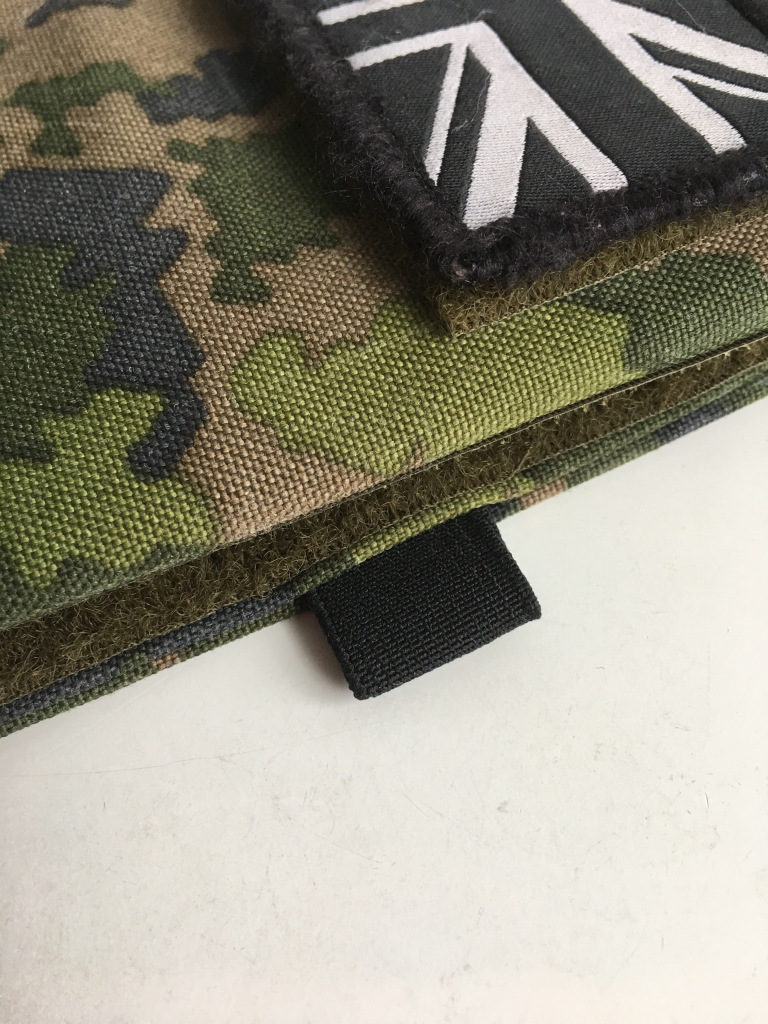 And there it is, our very own, first design and first piece of self-made gear. If you want a chance to win one of these, head to our Facebook page or our Instagram account to learn about the details. We will be giving one off in each media and as an extra we will give one Field Notes Expedition edition note book and a random Prometheus Design Werx patch off of our collections with the pouch itself. We are not sponsored by either of these companies, all is acquired by ourselves and our own to give away as a gift for some lucky supporter of ours. Cheers!

This article was first published in the Noble & Blue. Noble & Blue is a small Finnish outdoor and tactical gear reviewing blog, that also shares stories of learning and adventure. Click here to know more about Noble & Blue 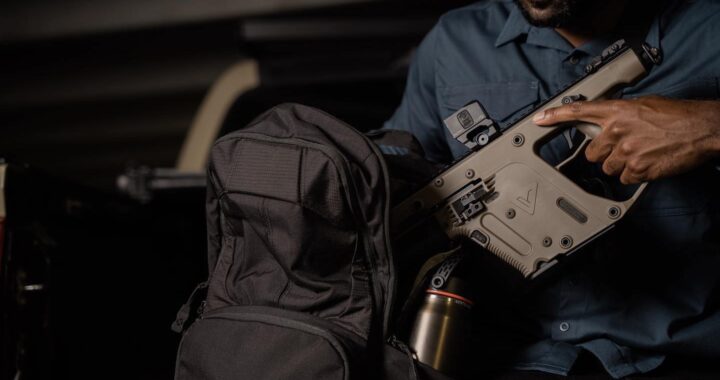