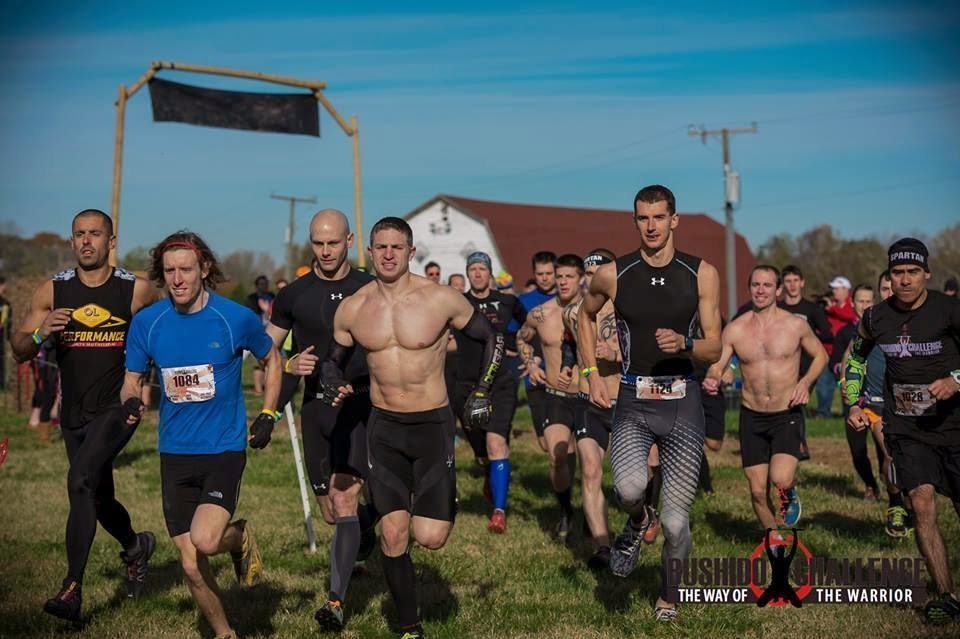 When I lined up at the inaugural Bushido Challenge earlier this year I realized that for the first time since I started running at the age of 8 I didn’t know a single person that I was competing against.  Now 6 months later lining up at the start of this weekend’s Bushido Challenge I not only was acquainted with most of the competitors but I was competing on a team with college buddy Jordan Whitlock as well as David Magida, Dakota Pellman and Chris Hass, friends I had made since my foray into the world of OCR.  On that first starting line I had been uncertain of what was ahead, now with my friends beside me I felt confidant and strong.  In running races nerves had long since become a thing of the past, the pre race butterflies had abandoned me sometime in high school, and never resurfaced until that first OCR start line.  Now my stomach was calm again.  Smoke bombs landed on the ground in front of us and with a shout we were off, tearing through the green smoke and into the woods! 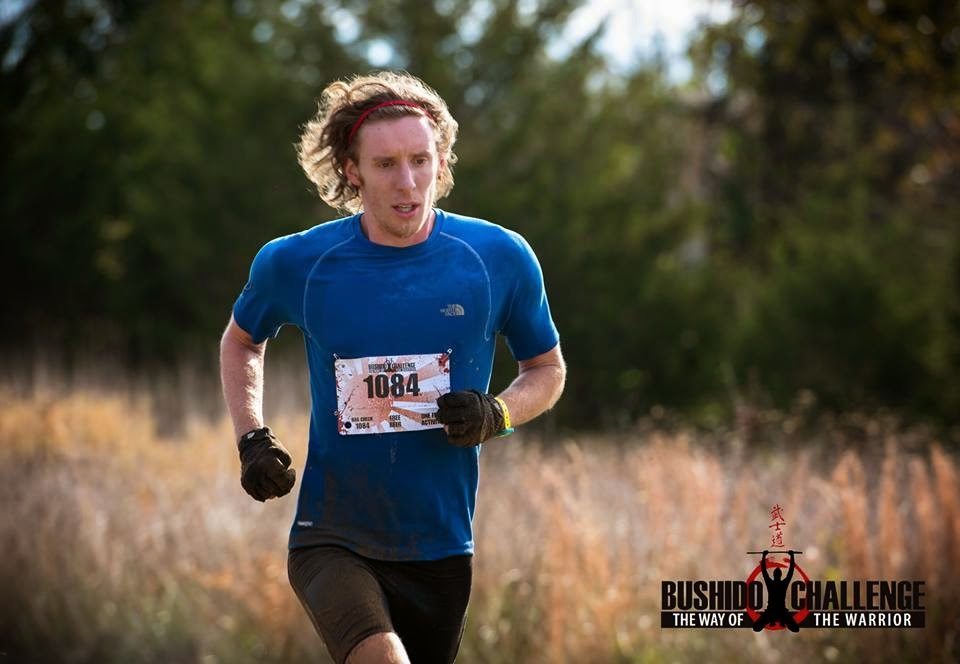 Even though this race was smaller than some of my previous OCR’s it took out every bit as fast.  David Magida and I settled in together behind a couple of early rabbits.  David had run me down in the final few meters of the first Bushido Challenge, and although we were teammates this time around we still knew where our true competition was.   The differences in the course were immediately apparent. For one thing the new venue, Belvedere Plantation a farm in Fredericksburg, was flatter and for another the course was marked like a Cross Country race with ribbon and paint making it almost impossible to leave the course.  In the first go around the course had been marked primarily with bamboo sticks, which matched well with both the race theme and the tall grass covering most of the course.  Deviations from the intended path ensued.  This time around we didn’t even have to think about looking for course markings and could concentrate on the race. 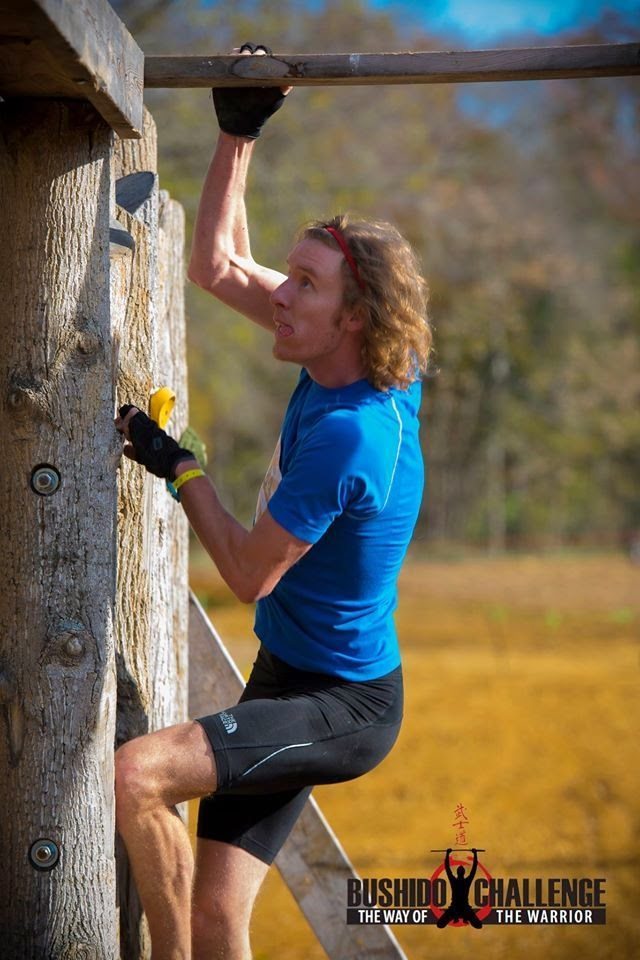 As we came to the first obstacle, a 6 or so foot wall about a quarter mile in David and I came up on the two front runners.  We flew over the wall, where I may or may not have kicked him in the head, and when our feet touched the ground on the far side it was clear running ahead of us.  I felt strong so I kept the pace FAST!  David hung with me though and our gap on the field increased rapidly.  Over the next mile, the course dropped in and out of a ravine, which was fun to navigate, and across a two small traverse walls connected by boards that were traversed by hand.  I gained a small lead on David but lost it on the traverse.  We hit the next obstacle together, two sloped slippery walls traversed by placing your feet on one side and your hands on the other, another improvement from earlier in the year, where the walls were slightly closer and had no slippery surface making it quite easy to just run through with your feet on opposite walls.  On the far side of the obstacle I kept the running pace high and finally felt David give a little.  He is a STRONG competitor and has got the better of me a couple times this year but the course on Saturday definitely suited my cross country back ground better than most OCR races.  The next mile had a fire jump into water, which was freezing as there had been ice on the puddles earlier in the morning, some upended logs about two feet tall to step across, and a crawl under spiked bamboo.  This was probably the fastest portion of the race for me and I had a comfortable lead coming into the tire flip, the only obstacle that I was somewhat apprehensive about.

There were three huge tires that we figured were for the men and three smaller but still large tractor tires that we thought may be off limits to us.  I had flipped lightest of the three large tires on the warm-up and while I knew ten flips wouldn’t be a problem for me to complete I figured it would take some time and energy on my part.  But as I entered the tire area I was told to choose any tire for my flips.  I immediately went to the larger tire already mentally prepared for the challenge, then with a quick thought to our team, scored on cumulative time, a switched back to the small tire and began flipping.  I finished just as David arrived with no one else in sight.  From here on out the course was pretty flat.  The monkey bars, fashioned out of rope slowed me a bit as they kept sagging.  Earlier in the year I had been next to David and his weight kept the ropes taught for me.  The first half of the obstacle went SLOW before I changed my technique and finally gained some momentum at the end.  After that it was short run to an obstacle with a sledge hammer and a log, and then a pool full of water with buckets surrounding it.  When the volunteer said to fill up two buckets I knew things were about to get tough.  My apprehension was short lived once I was directed to attach the buckets to opposite ends of a pole.  I knew once I had them on my shoulders that carrying them would become much easier for me. 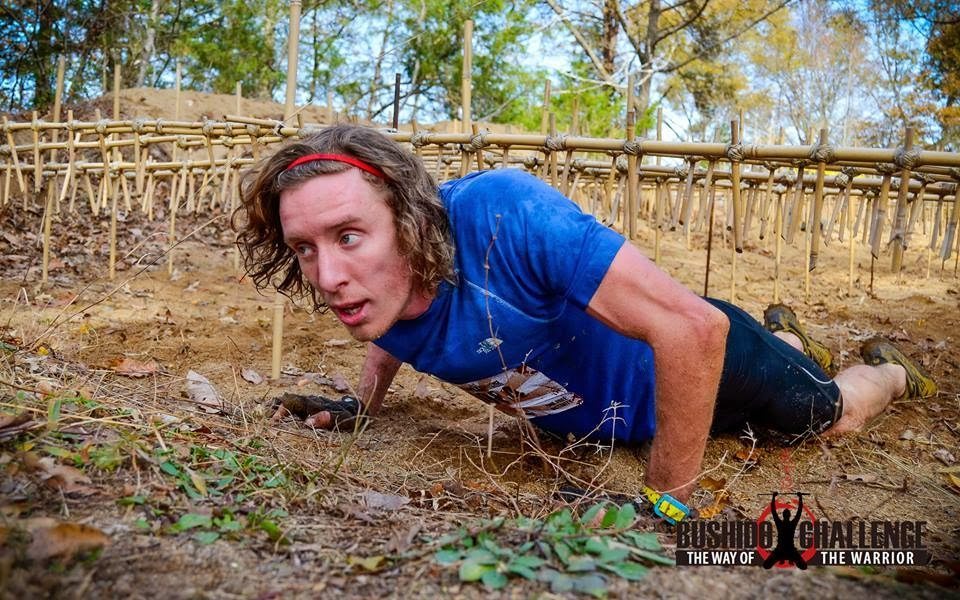 The unexpected obstacle however came in the form of latching the carabiner on the end of the pole to a metal ring on the bucket!  My first bucket went on smooth but the second one I just couldn’t get.  Finally I clipped it only to have it fall off when I tried to pick up the pole.  I clipped it again.  It fell off again.  Finally I relaxed and made sure to clip it securely. As I lifted them to my shoulders David was already filling his buckets with water.  My comfortable lead was gone, so I took off up pretty much the only hill on the course as fast as I could without spilling water.  As I had spent much of the previous month running/hiking with my little one in a back pack it turns out that I have become somewhat adept at a quick smooth shuffle, good for keeping an infant from bouncing as well as keeping water in my bucket!  20 or so seconds up the hill I managed a quick glance back expecting to see David closing.  Instead I saw him back at the buckets struggling with the same issues I had just been through.  I kept my jog/shuffle however adjusting the pole so that the weight balanced well on my shoulders.  I reached the top of the hill, looped around a stand of trees and then descended back toward the water pool.  The downhill proved slightly harder for water management but I was soon at the pool and emptying my buckets.  The finish was nearing now, with just a few efficiency obstacles left. 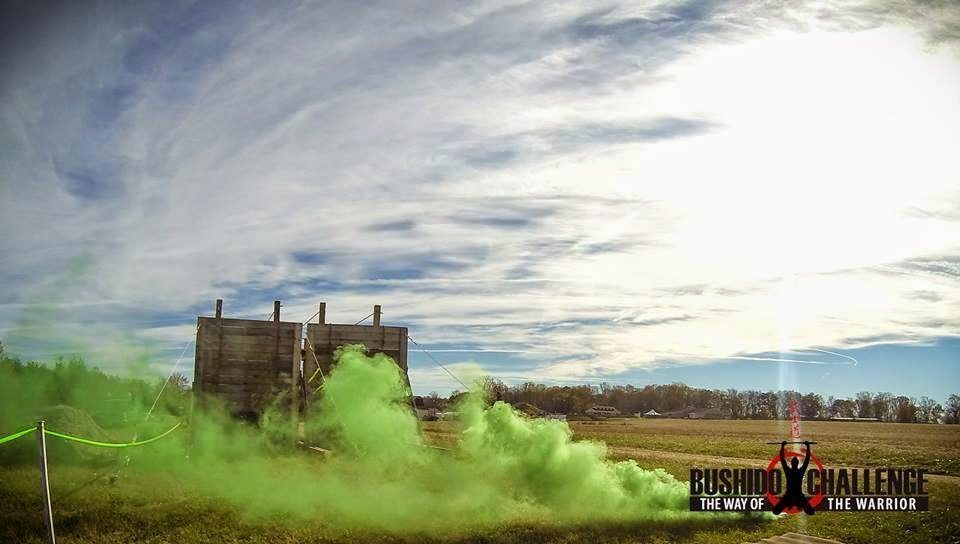 I cruised through the cargo net, followed by two seven foot walls.  Some technique work over the past few months had made huge improvements on these types of obstacles since my Spartan Race in August.  Then it was through the void and onto the final straight!  Right before the finish line was a 12 foot wall with a rope assist and a Tyrolean traverse strung from the top.  I hoisted myself over the wall and grabbed a rope.  Hanging beneath it from my hands and feet I started to traverse to the other side and the finish.  It was my first time on this type of obstacle and it started slow.  My feet kept crossing each other slowing me to a creep.  Halfway through I finally discovered that I only needed one foot on the line at a time and my pace more than doubled.  Seconds later I slapped the log on the far end, dropped to the hay below and trotted through the line.  David was already mounting the final obstacle as I finished and I welcomed him at the line.  A couple minutes later George Becouvarakis finished in third followed shortly by Dakota and our final score, proving my worries about the team race unfounded.  Jordan and Chris finished not long after and we set out for a cool-down.  The farm was a perfect venue with a lot of fun stuff going on and our cool-down turned into a tractor race with pedal powered tractors on a go-cart track.  I lost but I plan on being back in the spring to avenge myself!