Over the many years that we have been fighting wars overseas many Americans still don’t know anything about Wahhabism, and yet this strict form of Islam is practiced by many in Saudi Arabia today. We’ve heard of Sunni, Shia, and even Sufi Muslims but not about the Wahhabi Cult and how its adherents created a kingdom out of some very violent beliefs. But with the rise of IS and the destruction of many historical artifacts, the murder rape and enslavement of many men, women and children the world has to wonder what are the roots of this new terror group?

In the book, God’s Terrorists, Allen looks into the history of the Wahhabi, a fundamentalist Islamic-sect whose teachings today influenced Osama bin Laden and the Taliban, from the 18th century and until today. He particularly looks at the teachings of Muhammad ibn Abd al Wahhab and his followers the Wahhabi,  as they seek the restoration of Islamic purity.  The Wahhabis of course assisted the Saudi clan in their rise to power.

The Arab kingdom of Saud seems to be one of many exporters for high-level complicity in global terror. Today, many counter-terrorism experts on global terrorism identify Wahhabism as one of many large sources of global terrorism. Some would say this is nonsense even though fifteen of the nineteen hijackers were Saudi nationals. Draw your own conclusions but it is true that Saudi Arabia was formed around Islam and founded upon Wahhabism; though they are friendly enough to supply our nation with oil, can any of us know their true intentions for our Western nation and culture?

As books go, God’s Terrorists is a very detailed read. Charles Allen’s book on the Wahhabi Cult and the hidden roots of modern jihad gets into the colorful history of the Wahhabi cult unknown to many for a long time, even after 9/11. But Allen, an authority on British and Indian and South Asian history shares with us his story and by doing so enlarges our understanding of the current conflicts taking place overseas. We should be aware that this strict form of Islam being followed by extremists means they don’t have our Western interests in mind.

Allen shares his insights page after page. Some readers and critics may find this book dry because it lists a plethora of names and dates, but this information is important to understanding the many strands of relationships involved in supporting the netting of the Wahhabi cult. Wahhabism is used derogatorily by many for they see it as being ultra-conservative, fundamentalist and orthodox but these things are true. News headlines will clearly show beheadings and limbs being severed by cohorts who behead people for daring to insult the Arab clan. 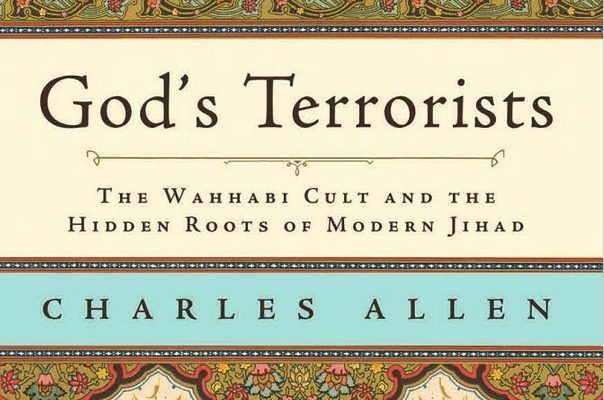 Allen goes back into the early 1800’s to gather evidence of the mayhem caused by strict adherents to the faith. From Judge Elsmie’s journal, Notes on some of the Characteristics of Crime and Criminals in the Peshawar Division of the Punjab 1872-1877, is a fascinating insight: ‘Murder in all of its phases: unblushing assassination in broad daylight, before a crowd of witnesses; the carefully planned secret murder of the sleeping victim at the dead of night, murder by the robbers, murder by the rioters, murder by the poisoners, murder by boys, and even by women, sword in hand…Crime of the worst conceivable kind is a matter of almost daily occurrence amongst a Pathan people.” It is any wonder that Green on Blue may occur in these lands that adheres to an extremist belief, one that encourages murder against any that they believe disagrees with its form of insisted existence?

The Commissioner of Peshawar, Colonel Frederick Mackeson will discover all too well that he is not wanted. He will oversee the work of many British assistant commissioners and magistrates and make it his business to help the tribal leaders, but his time will come. The commissioner is well liked but on a fateful day in September of 1853 a stranger will come to see him. Commissioner Mackeson’s staff will tell him that the stranger was seen outside praying. Why pray? Mackeson will be implored by the stranger to read a roll of paper and Mackeson will read it. What will the Commissioner receive for his generous effort?

Upon granting the stranger his wish, Mackeson will have a dagger plunged into his heart as he attempts to read the scroll. Deception by the Wahhabis is one way of trying to force the British out. The Corps of Guides surgeon notes “They are entirely controlled by their priests, and are at all times ready for jihadi {jihad}, be the infidels black or white…” Allen writes, the people of these lands saw themselves as engaging in a struggle to defend Islam but were at odds with the religion itself; their own religion; they wanted to protect Islam, and overthrow British rule, but worked against themselves as well.

The book is peppered throughout with insightful view into the Pashtun culture and colorful stories of elephant drawn artillery and Bedouin raiders fighting on horseback. Mujahedeen rally together and charge against Bengal Lancers or Sikh Infantry fight against Swati tribesmen.

A hundred years pass, and the British will soon throw their lot in with a fractured Islam. The Ottoman government will align with Germany and Austria-Hungary and under T.E. Lawrence the British will have to find a Muslim leader who will join with them against the Ottoman empire. They will choose Sharif Hasayn, to lead the Arab revolt against the Ottomans. But it will be ibn Saud with his ability to form a centralized government who too will join them. Ibn Saud will work alongside the Sharif, but he is very jealous of the Sharif, but a kingdom will come out of the alliance.

From there we will learn about Osama bin Laden, son of Muhammad, and how his father accumulated a massive fortune by working as a construction contractor for the Saudi Royal family.  The children, kept in the family main mansion will receive strict Wahhabi instruction. In 1977 on a family Hajj, Osama will abandon all western links, grow a beard and commit himself to seriously study Islam after being influenced by the revolutionary anti-imperialist ideology of the Muslim Brotherhood.

There is a lot of interesting facts in Allen’s book. Those who believe the Palestinian intellectual Edward Said and his myth making revisionist nonsense that he promoted cannot ignore real facts. Westerners and Easterners cannot blame Western imperialism for the ills in their country. Reading God’s Terrorists lets the reader follow facts. To not have a distorted view of history means to read the journals, notes, eye-witness reports and follow the clues. Allen provides ample evidence here that what came out of a small cult following is capable of building while simultaneously destroying both nations and cultures.

But what exactly is being built and what is being destroyed?