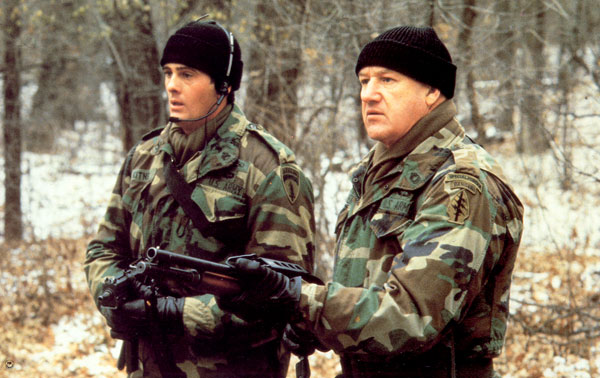 Last week I decided to check out a film I’d never seen before and I settled on a movie filmed in 1989 titled The Package. The Package is a cold-war thriller and it stars Gene Hackman in another of those manly action movie roles. In this film the Soviet Union’s General Secretary and the United States President are about to sign a treaty banning all nuclear weapons. Hackman is the unfortunate soldier thrust into the midst of a conspiracy hatched by Russian and American military and civilian leaders who are planning to assassinate the leader of the Soviet Union (clearly resembling Mikhail Gorbachev)

Gene Hackman stars as Johnny Gallagher a Special Forces Master Sergeant in the United States Army. He is in charge of security at an American-Soviet nuclear disarmament summit. He does a good job in this role and the banter between him and the soldiers uses colorful language that Hackman is no stranger to being that he served as a Marine in real life. Hackman left home at age 16 and lied about his age to enlist in the United States Marine Corps. He served four and a half years as a field radio operator stationed in China. The relationship between Gallagher and his men is plausible, funny, and interesting as you wonder what is going to happen next with the soldiers.

The film begins in front of the Russian War Memorial in East Berlin where a carload of VIPs is ambushed right after Hackman’s character Gallagher stops two hikers from coming near the summit. Things don’t go well for Gallagher and he gets a lot of the blame. The military decides to rotate him stateside as an escort for a military prisoner and deserter named Thomas Boyette (played by actor Tommy Lee Jones). As Gallagher is escorting Boyette they take a bathroom pit stop and he soon learns the awful truth. He’s been set up and something very bad is going to happen. 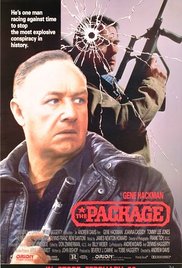 Jones plays Boyette with an equal amount of intelligence and menace. Who is this savvy guy? Boyette escapes and Gallagher pursues him through Chicago. Gallagher is joined by his ex-wife Eileen (Joanna Cassidy), a lieutenant colonel in the Judge Advocate General Corps of the U.S. Army, and Chicago police Lt. Milan Delich (Dennis Franz).

Both Hackman and Jones are excellent in the movie although the script is left wanting. Boyette, played by Jones, is cunning and interesting to watch. I would have liked to see much more of Boyette’s character on screen. Hackman can always be counted on by playing a decent guy caught in a bad position. The Package, released in 1989, was written by John Bishop and directed by Andrew Davis. Davis is an American film director, producer, writer, and cinematographer who brought the world the movies Code of Silence, Above the Law, Under Siege, and The Fugitive. Yeah Steven Seagal, ha!