I have said that if I hear one more person say that the 22 Long Rifle is the best all ’round prepper/survival cartridge,  I would challenge them to a duel at 50 paces (my 100 yd pace count is 64 paces). I get an AR chambered in .223/5.56 (basically a heavier 22 going really fast) and they would get a 22LR and their choice of semi or bolt-action rifle. From the low ready, go! 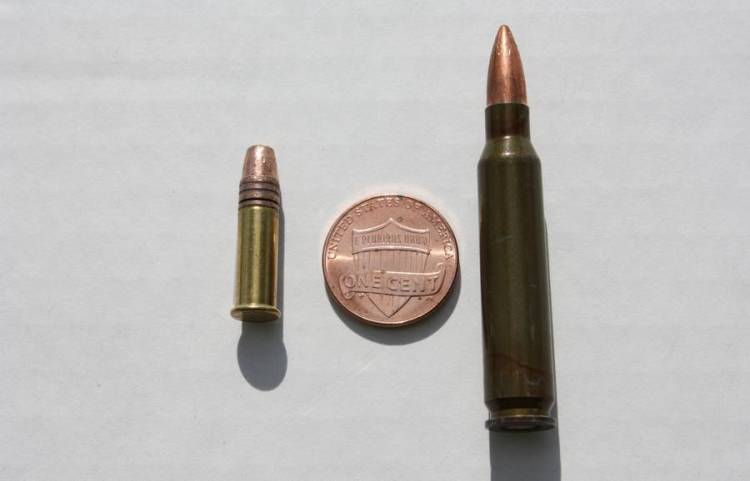 Most folks who are into preparedness and survival aren’t planning for getting stranded in a national forest and having to “survive” their way back to civilization shooting rabbits for sustenance. According to a study conducted about preppers, most are waiting for a financial collapse. In my view, a severe financial collapse entails much bigger varmints to contend with. Even natural disasters like Hurricane Katrina had it’s varmints. That means self-defense.

First we will talk combat pistol distances. I use the term combat pistol because if you are using a pistol for self-defense, you are in close quarters combat. Inside of 25 meters is the realistic limit for pistol combat. Most altercations occur much closer in the 7-10 meter range. The exception being a transition from a dry or malfunctioning long gun/carbine to a pistol out of necessity. My carbine is my primary weapon if I have a choice but it’s not always practical or legal so sometimes my pistol is my primary.

At 10 yards a 40 grain 22LR out of a 20 inch barreled rifle has a velocity of about 1200 feet per second (fps) and about 135 foot pounds of energy. Keep in mind that out of a pistol things are dramatically less due to the decreased velocity associated with shorter barrels. For example, out of a revolver with a 2″ barrel, the bullet will be about 850 fps and 70 foot pounds of energy and I’m being generous. The maximum practical effective range of the 22LR is (if you push it) 150yds.

This is what the promoters 22LR folks have to contend with. It’s factual. It’s science. At the CAG we preach shot placement and consider it king.  However,  let’s look at some other stats that bring this into perspective for the prepper.

A common and affordable 9 mm cartridge is the 115 grain ball round.  Typically it is travelling at about 1200 fps and has about 350 ft lbs of energy at 10 meters. This is 2.5 times the energy of a 22LR with a larger wound channel.

Rifles. Consider the 5.56/223. Out of a 16 inch barreled AR (one of the most popular, most versatile, modular, most common rifles in America that literally millions of Veterans are trained to use) the 5.56mm M855 screams out of a 16 inch barrel at about 3000 fps, with a 10 yard muzzle energy of around 1275 ft lb. The maximum effective range (M855) is 500 yards and can blow through 1/8th inch steel att that distance.

I really don’t think I need to do any more comparisons but……  Nearly everything else on the planet is better than the 22LR. There is a reason its not legal for medium/big game in most states.

Yes,  it’s cheap….well it used to be. It’s hard to find in some locations nowadays.  Yes, you can slay some small game very cheaply, I’ll concede that. I’ve killed more squirrels, groundhogs, coons and grouse than most with the 22LR. I use a 22LR when its time to butcher my hogs but my life doesn’t depend on it dying immediately. I’ve also had two uncles shot with the 22LR and both lived,  one in the temple– he lost his eye, the other nearly in the heart–he was fine. Both were shot at a distance of less than 10 feet. Again, we preach shot placement but who can afford those kinds of stats when there are much more viable survival rifle options.

Some Pros and Cons to help you with your decision-making process.

These 4 simple Cons should be weighted heavily in your decision matrix, your life depends on it.

There are a lot of internet stats and opinions out there and data can be manipulated and misinterpreted. I’m sure there’s a chart that shows 22LR is more effective than 50BMG. I can tell you this, I have never been issued a 22LR weapon while serving in the Special Forces. Sure there was some dabbling with it as a silenced assassination weapon in Vietnam but I think I’d rather assassinate Abu Bakr Al Baghdadi with a suppressed 300AAC AR takedown gun than a suppressed Ruger 22/45. I digress, we were talking about survival and preparedness.

I love the 22LR. It should be included in every preppers arsenal and every responsible kid should be taught to use them at an early age. But use it for what it’s good for, small game and learning the fundamentals of pistol and rifle marksmanship on the cheap. A better option would be to have a brick of 22LR ammo and a drop in 22LR conversion kit stowed in your bug out bag. The best of both worlds.

One may as well say that a high-end 22 caliber pellet gun is the best survival weapon. After all, there are models that are comparable to some 22LR cartridges and they are not considered firearms.  Pellets are cheap and at least scalpers aren’t buying them all up at Walmart to sell for double the price, they’re quieter….but….that’s another article.

Any takers on the duel?

7 thoughts on “The Myth of the 22lr Survival Rifle Cartridge”