There’s a tendency for manufacturer’s to construct knives that are way too expensive for the average buyer to purchase or they construct one too poor in quality so that few would actually rave about it. Here’s a great knife that will please all. This Boker Applegate Fairbairn knife has great styling, price, and utility and therefore is solid in my ‘book’. 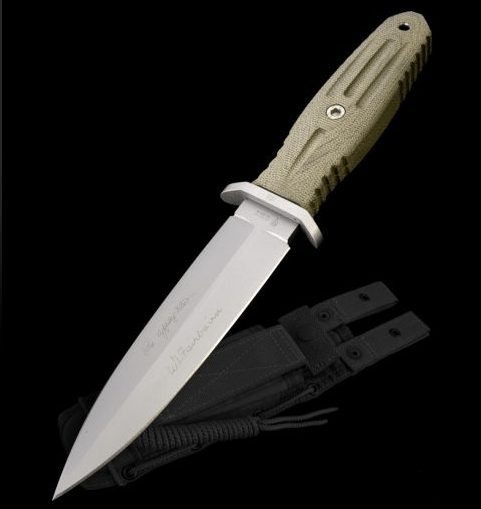 So what’s the history of this exceptional knife and who or what is Boker? Let’s get some background:

The original commando knife used by British forces in WWII was known as the Fairbairn–Sykes fighting knife. It was created by Lt. Col William Ewart Fairbairn, a British police chief for the concession in prewar Shanghai, China and Eric Anthony Sykes. Both men gleaned their experience by working Shanghai’s back streets, and alleys fighting criminals and used that experience to teach American and British forces their art of silent killing. In 1940 both men worked as instructors at the Achnacarry training camp in Scotland. This camp trained many commandos as still has strong links today with the military communities.

They created a weapon that was a mix between the long British bayonet and the shorter Shanghai fighting knife. This knife pattern was used to construct knives that were used extensively by the British Empire and particularly by British and American forces in Normandy. About January of 1941, London’s Wilkinson Sword began full-scale production, and by war’s end it and other manufacturers produced plenty of knives. When I say plenty, I mean to say almost 2 million knives, were created. Many of varying shapes and quality made it into the hands of the Allied warriors. 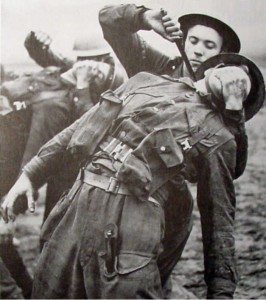 History.net notes that, “Brig. Gen. Robert T. Frederick, commander of the American-Canadian 1st Special Service Force (aka Devil’s Brigade) designed his own variation of the knife, the V-42 stiletto, manufactured in western New York by W.R. Case & Sons.” Frederick added an indent on the ricasso of his knives to allow the thumb a better purchase.

In his book, GET TOUGH! (1942), Fairbairn wrote, “In close-quarters fighting there is no more deadly weapon than the knife. In choosing a knife there are two important factors to bear in mind: balance and keenness. The hilt should fit easily in your hand, and the blade should not be so heavy that it tends to drag the hilt from your fingers in a loose grip. It is essential that the blade have a sharp stabbing point and good cutting edges, because an artery torn through (as against a clean cut) tends to contract and stop the bleeding. If a main artery is cleanly severed, the wounded man will quickly lose consciousness and die.”

The knife they developed for combat-use was effective. The primary function of their knife was for killing enemy sentries swiftly and silently. In order to do this they shaped the blade into a thin, narrow pattern that could penetrate clothing or pierce a ribcage. Some soldiers dulled the knife tip so it would not stick into bone. The knife was made for precision usage rather than for slashing and the hilt gave the user a strong, positive grip to push a blade into an enemy. 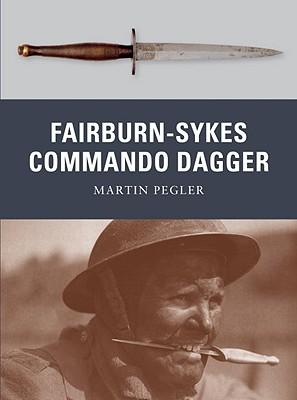 It was learned that a knife wound from a dull blade would heal quicker than a cut gained by a sharper blade. It was decided that the knife edge be crafted in such a way as to produce a clean, arterial cut that would not close. The knife was created with a double-edged, razor sharp surface. The knife had a few shortcomings. The round, solid metal handle of the knife made it somewhat difficult to orient in the palm of the hand; it was believed that shortening the handle would improve manipulation of the tool. The narrowness and length of the blade made the tip weak upon certain objects, and the shape of the blade made it ineffective for cutting.

Rex Applegate was a student of Fairbairn. Together they decided to create something that had a good balance between form and function. They studied the original Shanghai knife and the FS-knife. Using their combined experience they made changes and improvements. The new knife, known as the Applegate-Fairbairn Knife, had a shorter blade and a handle that was more wieldable. It harkened back to the original agile Shanghai knife. Though successful, Applegate spent a lifetime trying to develop the perfect knife.

Applegate went on to write a few books. One of those books is titled, Kill or Get Killed, imparted Applegate’s lessons to those interested in functional close-combat. Some modern critics disliked the lessons Applegate’s left behind and some believe he wasn’t a true innovator. But Applegate remains a legend to many. Thousands of his knives saw service with the U.S. Office of Strategic Services, the precursor of the CIA. Applegate, respected by many, also became friends with John Wayne and became a technical advisor on movies such as the Alamo. He was also a bodyguard for UK Prime Minister Winston Churchill and US President Franklin D. Roosevelt. 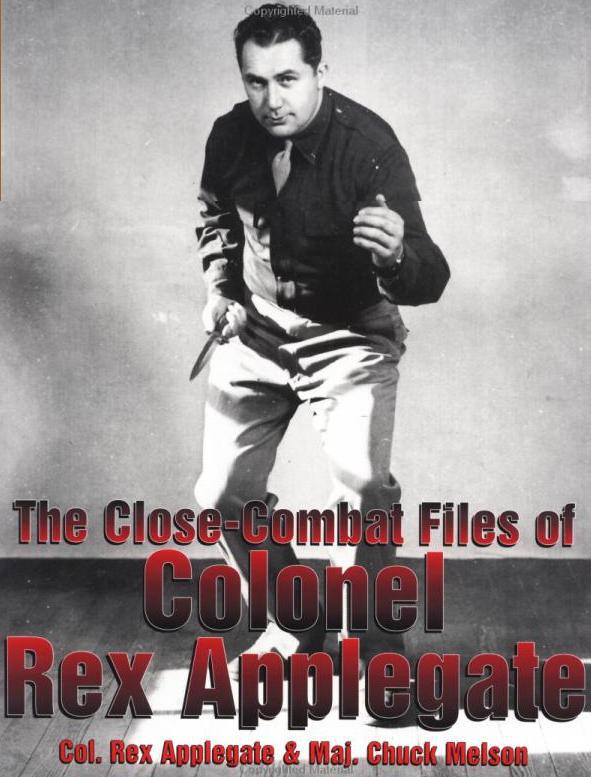 Now, Böker is a commercial manufacturer and distributor of knives and is recognized by their logo, a distinctive tree symbol, of a chestnut tree that has been used for the last 150 years in various forms. A good fact check on the net will tell you that Böker started as a 17th century tool maker in Germany and moved into swords and blades. The Böker family traces its tool making roots all the way back to 17th century Remscheid, Germany. Understanding the history of Boker knives is key to understanding the high quality of their knives.

Böker is based in Solingen, Germany. They make some very sturdy folding and outdoor knives and Boker was one of the first companies to offer ceramic knives that are now so popular with consumers today. Since 1869, Boker created only the best in sporting and collectible knives from their manufacturing plant. In 1986, Boker USA, was started in Denver, Colorado for US production of high quality knives and I’ll tell you this knife is gorgeous. Just look at the pictures and the accompanying video.

No other custom knife maker influenced the tactical knife scene like William H. “Bill” Harsey. His designs created an excellent reputation in the world of tactical knives. Collectors know that his custom versions are hard to get and sought after worldwide. Boker began a collaboration with Bill Harsey and this killer looking knife was created.

This is not your everyday knife for slicing ham for sandwiches or whittling wood. Everyone seems to like the gigantic Bowie knife or a knife with all the doodads and widgets. This Boker knife was made for kicking ass. Sure, the old-school blades look cool and the new ‘tactical’ knives look amazing but many of these are very impractical for real carry. Many knives today are overly big and unnecessarily so to fit the needs of the consumer. This knife was made for fighting and you can stab, slice, downward strike it, hack, chop, pry or even throw this thing. It is agile and elegant. Add this to your Xmas list.

Today with many warfighters carrying rifles, pistols and kitted in MOLLE and armor carrying a smaller knife that is easily accessible and wieldable makes more sense. The old scabbards or sheaths for the original knives had some police officers carrying the knife upside down. In other words, they released the blade by unfastening it, and letting it drop down. They carried them on them sleeves, legs or belts.

Today, you can put this effective AF weapon on your belt or your MOLLE.  A MOLLE-compatible sheath would have been nice to have. A kydex sheath would be well-suited for this. In the end, the Boker quality is quite high. I can see they’ve adhered very closely to what Applegate hoped for, a simple yet effective weapon. Adding a nicer sheath might have bumped the price up.

The blade is very strong and comes with a steel coated in a nitrate to eliminate corrosion and glares. Basically it is one solid and strong, sharp and pointy piece of steel and will cut easily without sharpening it upon first use. The fingerguard is one piece, and integrated with the blade & tang. This means it’s not going to break easily. The tang reaches out of the end of the handle and can be used as a windowbreaker.

The Micarta hande is beautiful and contrasts well with the silver colored blade. The grip is a textured, green canvas Micarta. The largest use for Micarta is for high strength electrical insulation, knife handles and handgun grips. It has been used for heat shields too. This means it is durable and resistent to wear and will give you a great grip even when it is wet or dirty.

The fingerguard is gorgeous. It is curved nicely upwards and is comfortable upon the tips of the thumb and forefinger when pressed against it. Pushing or pulling is made easy by the stable guard and full, strong tang. Boker uses an American bead blasted 440-C high performance stainless steel hardened to HRC 58. This type of steel is hard, is easy to sharpen and holds up well.

This knife is exceptionally well balanced and finely crafted. The scabbard needs improvement but overall this is a great item to have. Old school meets new school-Retro is in. This is something I’m keeping and won’t part with easily.

Weight: 5/5 Very well-balanced and not heavy. 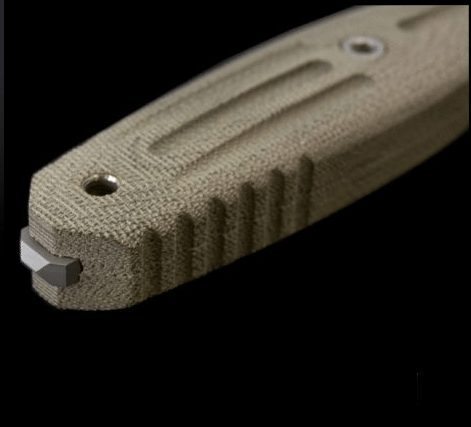