Buying a high quality firearm requires alot of research, knowledge, and sometimes money. The first two, in my opinion, are definitely necessary in order to prevent making a regrettable purchase. The idea that more money equals more quality is starting to fade away, in my opinion. The Girsan Regard imported by Zenith Firearms is one such pistol that proves that you don’t need to spend alot of money to get a good product. Watch the videos below.

The Girsan Regard is basically a clone of the legendary Beretta 92F design, but with a couple of obvious differences. This Regard that I am reviewing looks alot like the Beretta M9A1 if you were to look at the specific frame design where it thickens around the rail area. 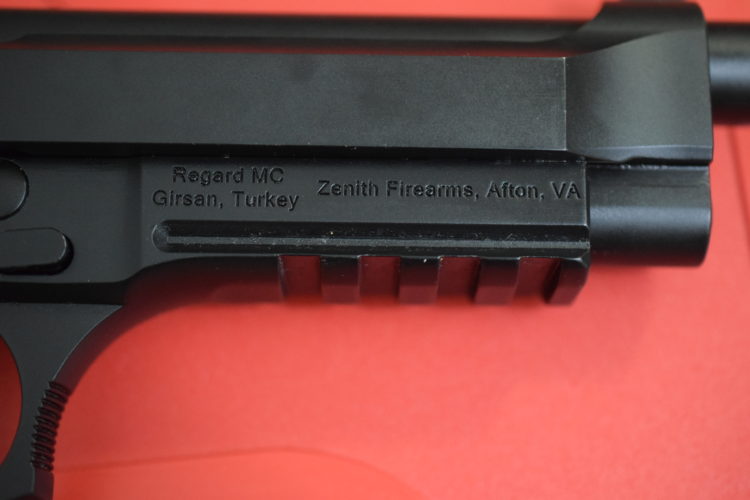 Girsan is an expert at reverse-engineering already good designs. The basic focus of Girsan, when it comes to the Beretta design, seems to be ergonomics and general controls. One of the things I most appreciate about Girsan and their work is the fact that they are always chasing military contracts, and therefore you are always getting a Mil-Spec product. Girsan is ISO 9001 certified and also holds certification in Industrial Quality Assurance, which means that their manufacturing has to conform to Turkish military quality standards at all times. Girsan also does some NATO-like tests to their pistols, which they use to establish standards for durability and performance. Check it out HERE.

The Girsan Regard shares alot of the best qualities that we have come to love in the Beretta design, except it is missing a few of the updates that improved the safety and reliability of the design like the oversized hammer pin. This tiny little upgrade helps keep the shooter safe if the slide should ever break and decide to go rearward into the shooters face. 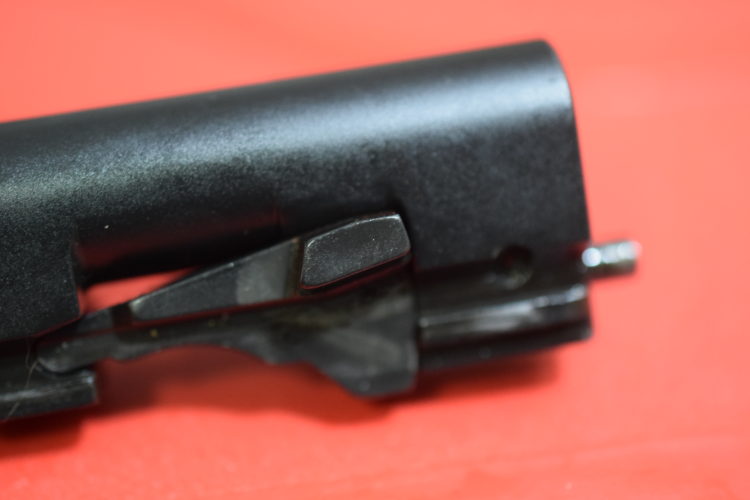 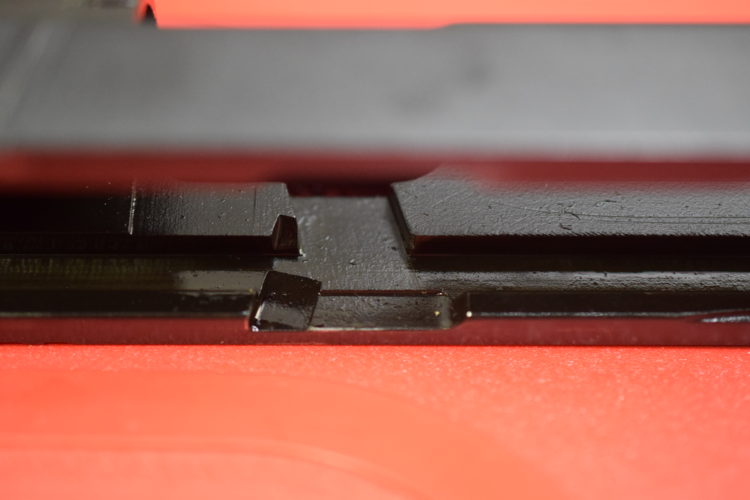 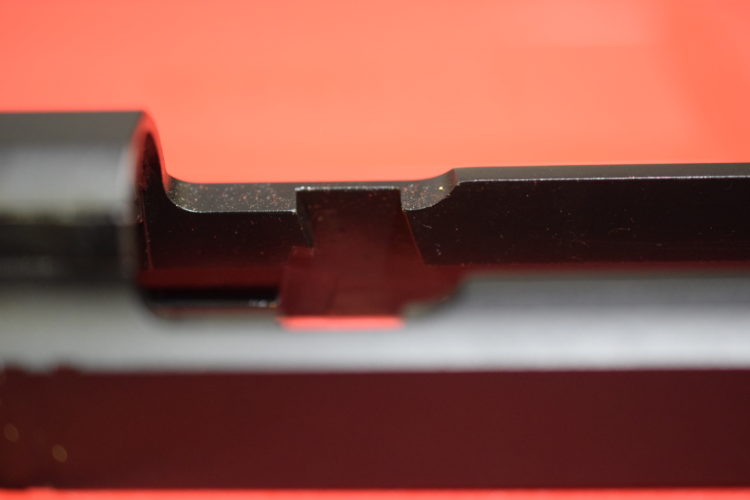 The grip of the Regard is one of the biggest departures that were taken from the Beretta design. With the big smooth finger grooves and the vertical serrations on the rear of the grip, it gives the feeling that you are getting a better grip on the pistol. In reality, the grip is the same size as the Beretta grip with only a few changes like the amount of rear serrations. 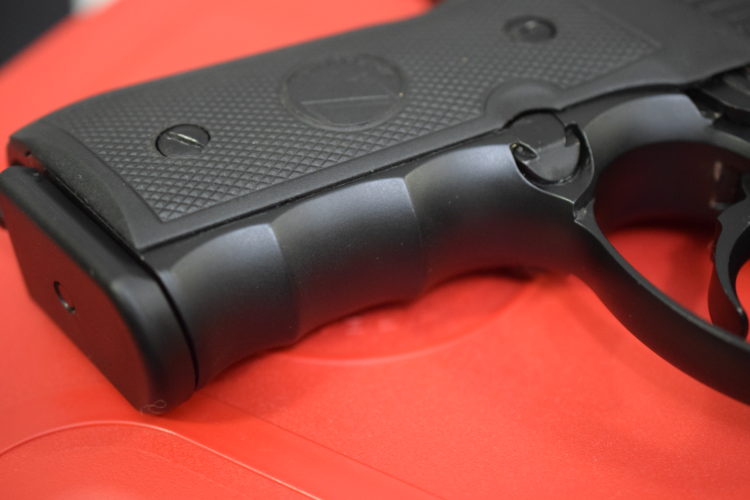 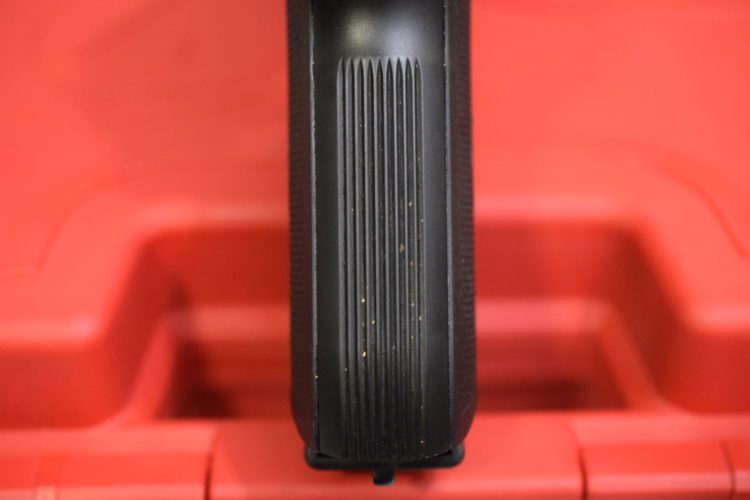 The controls on the Girsan Regard are a slight separation from the Beretta in that they seem to be slightly larger than the Beretta controls. This has allowed me to manipulate the important controls, like the frame mounted safety, with greater ease. The magazine release, however, is probably the only control that was not extended or changed much at all by Girsan. But, as with the Beretta design, it is reversible, which is convenient. 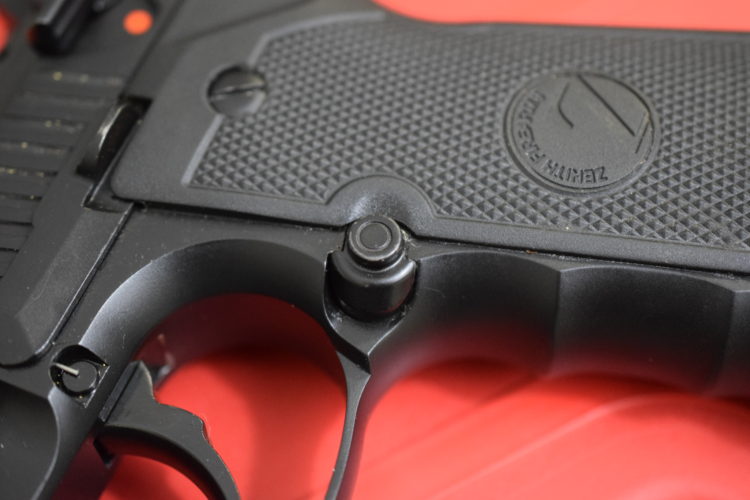 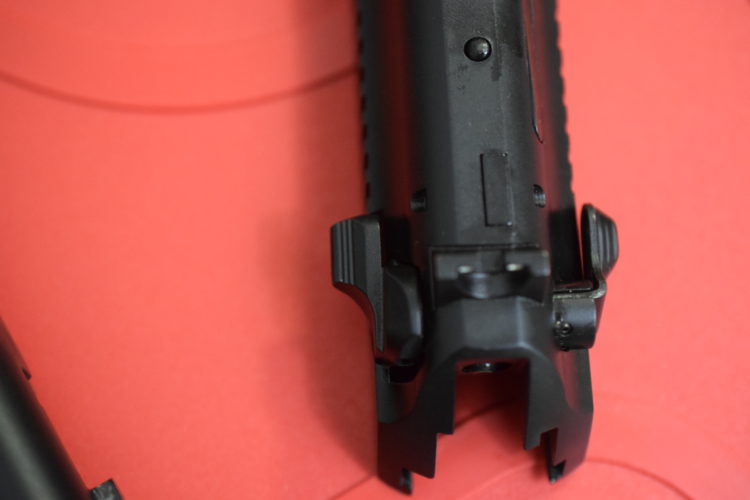 The slide stop seems to be the same size as the Beretta slide stop, but it lacks the rounded edges. This seems to only help with using it as a slide release. 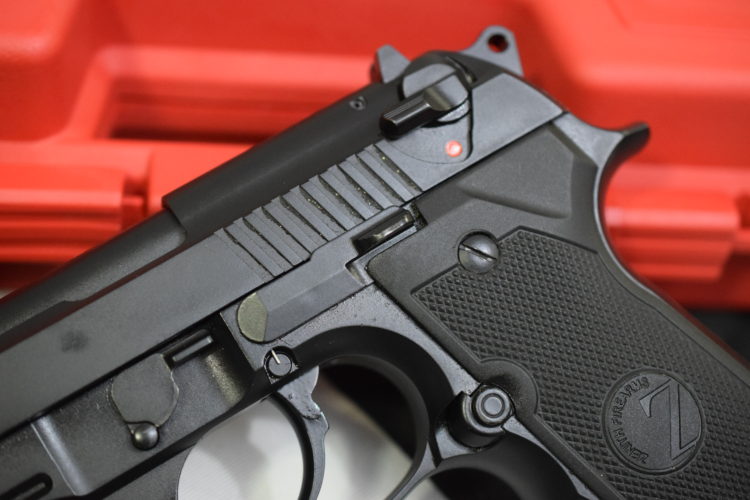 The serrations on the slide are not usually counted as a control, but I consider it as such for this review. The serrations are obviously different in appearance. But I will say that Girsan did a good job with making the serrations just deep enough to be functional, and did not round off the serrations so that the user could get a better grip on the slide.

The finish of the pistol seems to be a Nitride finish. It takes alot longer to wear the finish of this pistol, which I personally consider to be more on the side of a negative. I basically will have to be very rough if I want to get the pistol to wear. I like wear on my firearms, so do not take my discontent about the finish seriously. A strong finish just means that the pistol will look new for longer. 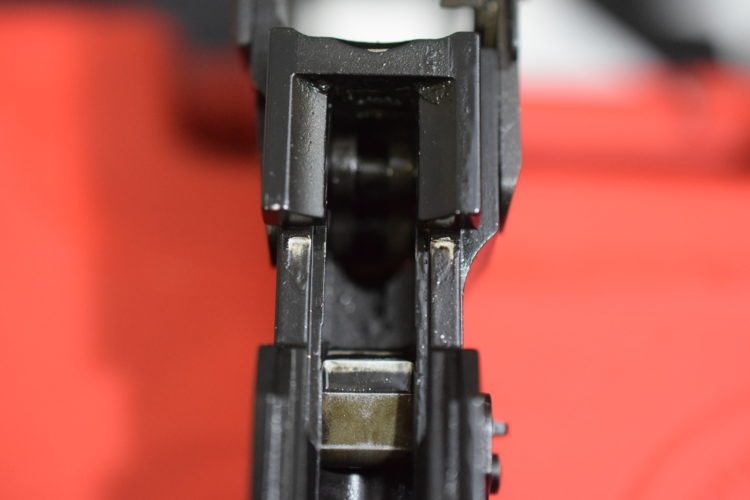 The only real places of wear on this pistol are in the track where the barrel rails ride during recoil, and a little on the barrel towards the front. 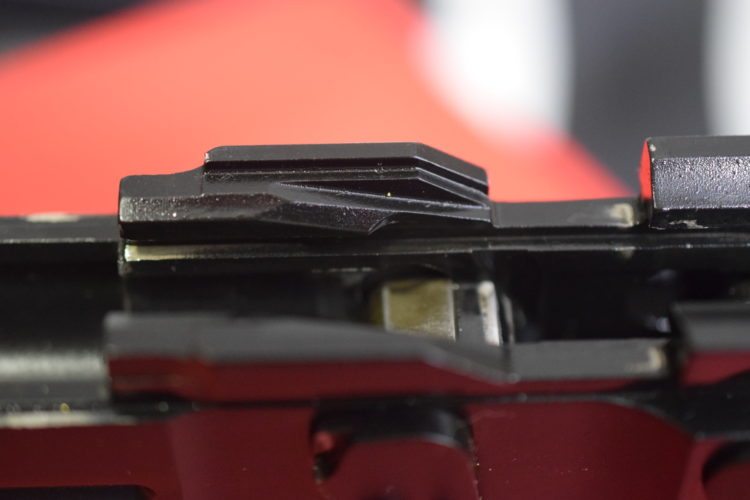 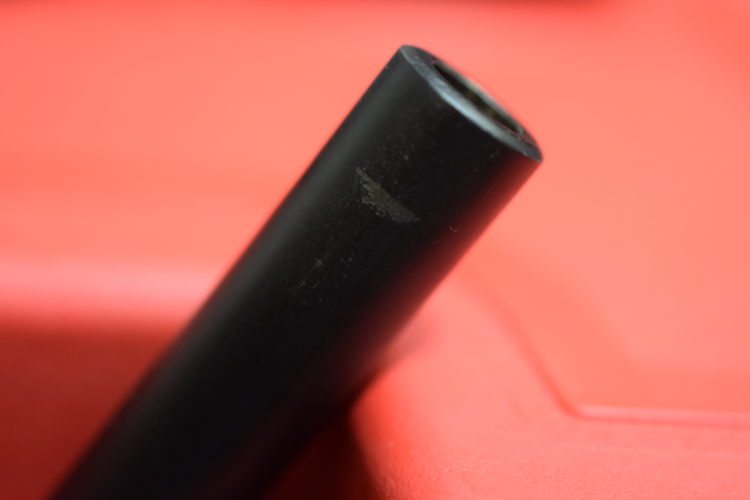 Also another note is that the barrel does not have a very well protected crown like the Beretta. 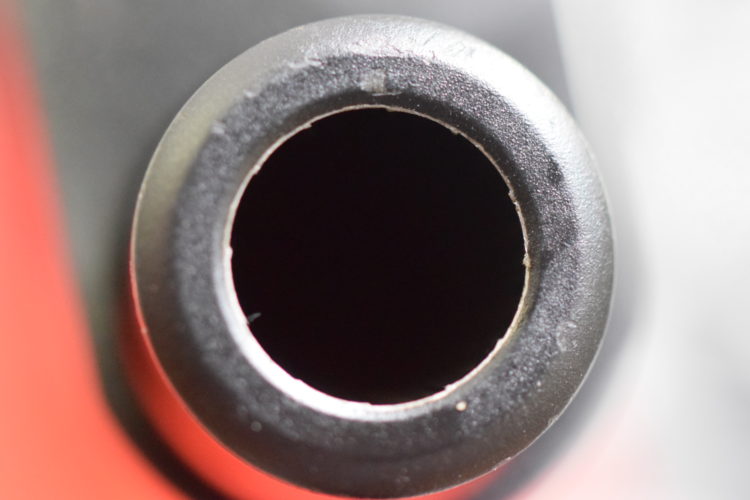 The magazines that come with the Girsan Regard are specifically made for Girsan by MecGar themselves. 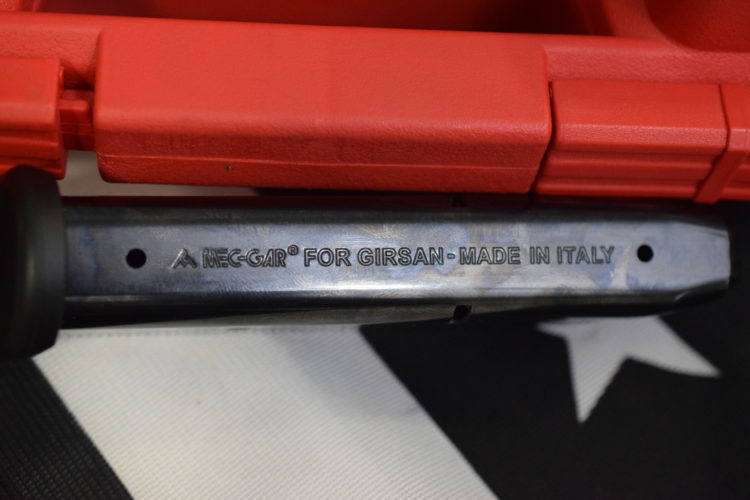 Sadly the magazines are restricted to an anemic 15 rounds. 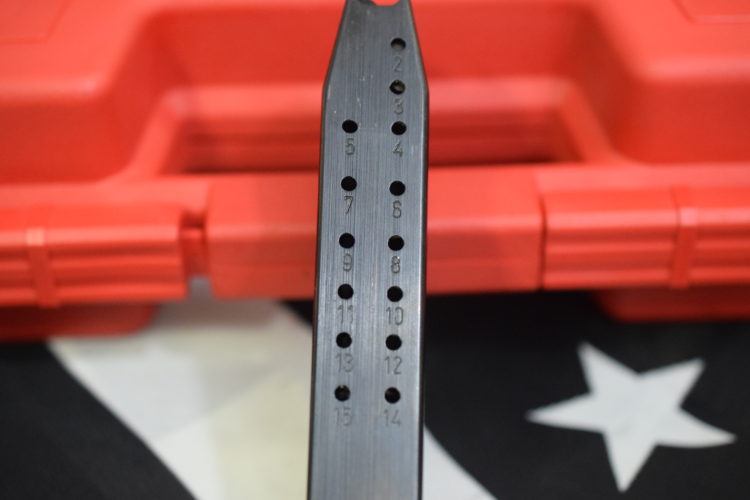 The crimps on the sides of the magazine are a somewhat clear sign of the purposeful limitation of the magazine capacity. Honestly, 15 rounds is not a bad capacity, but it is short of the standards we have come to expect out of pistols made today. 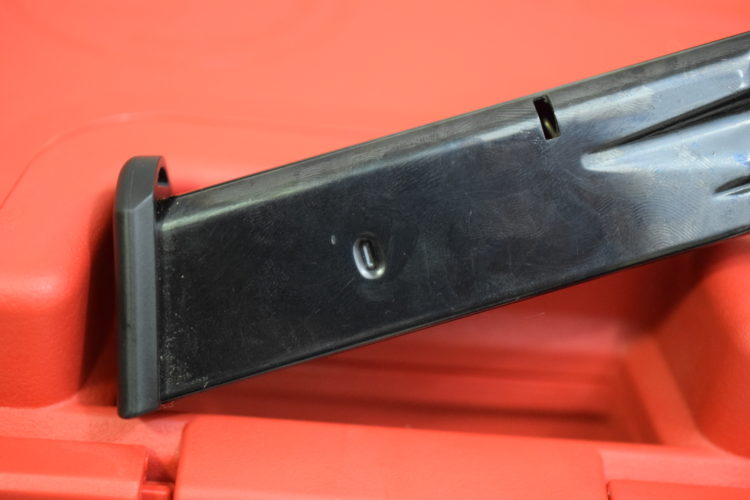 The recoil on this pistol has only been tested with NATO ammo. I found that the pistol handles the NATO ammo pretty well, but is not as soft shooting as my Beretta. I have great confidence in the durability of this pistol with +P and +P+ ammo, however. The Beretta pistols have proven for decades that the design works after high round counts with hot ammo, and I imagine that Girsan has designed their own pistol to do the same.

The Girsan Regard, as with most other pistols from Zenith, comes with a 5 year warranty that covers the pistol from any manufacturer defect. I prefer to see a lifetime warranty with my pistols but I can understand the reasoning behind only having a 5 year warranty. Typically a defective part or pistol will rear its’ ugly head within 2000 rounds in my experience. 5 years should be long enough for the user to uncover the defective parts, but then again, defective parts may come up a little later than 5 years.

The Girsan Regard has worked very well for me. It seems to be very well made, and ready for duty use. The focus of this pistol seems to be on durability, and a little bit on ergonomics. The controls and the grip say to me that Girsan was looking to make the design a little more attractive to a wider range of shooters. The design that Girsan chose was an easy choice since the Beretta 92 series of pistols have earned a reputation for being durable and rugged. Girsan adding all metal components back into the design is just an added bonus.

I appreciate this interpretation of the Beretta 92 series of pistols. I feel that Girsan focused in the right areas when they were redesigning the grip and the controls. I just wish that the pistol handled recoil a little better and I wish that Girsan would have made the front sight removable. Giving the user an option to put different sights on the pistol is something that can be a huge help for those deciding whether or not the pistol is worth it to them.

Other than a few things that would make this pistol top notch, I was surprised at how well the pistol was made. Usually pistols in this price range would have a lacking in quality, or have much less coming in the box with it. I like that you can get a pistol that is made to be used, for a nice low price. Again, I am glad that Zenith is working to continue bringing these high quality pistols into the US market.

There are little to no machining marks. The finish holds up very well, also. It is also a plus that all the components are metal.

I feel like Girsan should have taken the design of the 92FS rather than the 92F. The safety against slide failures is very important if you are gonna really run this pistol.

The ergonomics of the pistol are terrific, but the felt recoil is slightly off-putting.

In most cases, 5 years is enough time to find a bad component. But I feel that a lifetime warranty says something about the confidence the company has in their firearms.

I was loaned this product with the intent to get my honest feedback about this product. I am under no written, verbal, or implied contract to give this product a good review. The opinions expressed here are my own and do not represent the general feelings or opinions of Spotter Up. 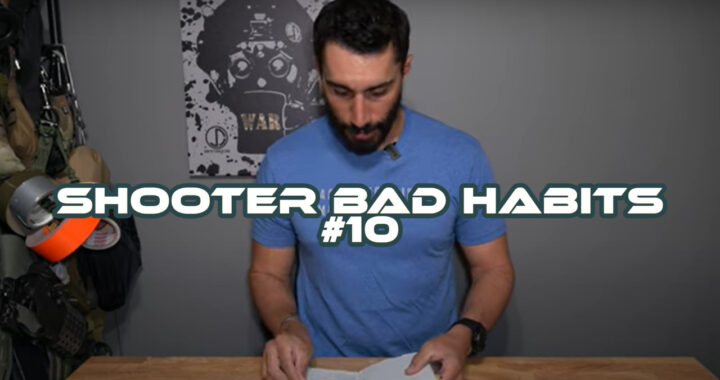