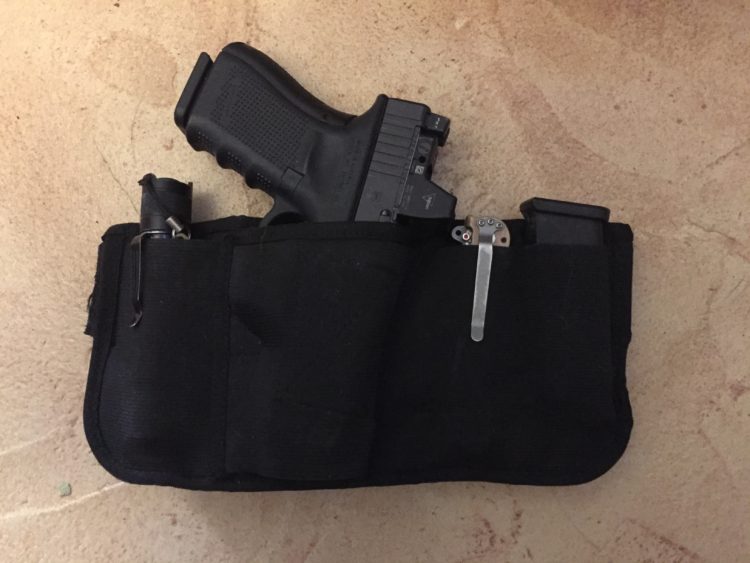 Belly band holsters tend to be a four to six-inch-wide surgical grade elastic with a holster pocket sewn into it.  They are secured closed with Velcro and have the advantage of being low profile and NOT requiring a belt.  Think carrying a gun with loosely structured clothes like workout shorts, sweatpants, yoga pants where a gun in a holster doesn’t have a belt to support it.  You simply can’t clip a gun securely to pants/shorts that don’t have a belt.  Doing so risks floppy gun syndrome or worse, the dropped gun.

The Brave Response holster differs visually from the most belly bands in that the strap is narrower and attached to a padded, semi rigid platform on to which a holster is sewn at a slight forward cant.  The holster features a removable thumb break.  There’s also three magazine pouches around the holster, two in front, one behind. The holster is washable and available in any color as long as you want black. 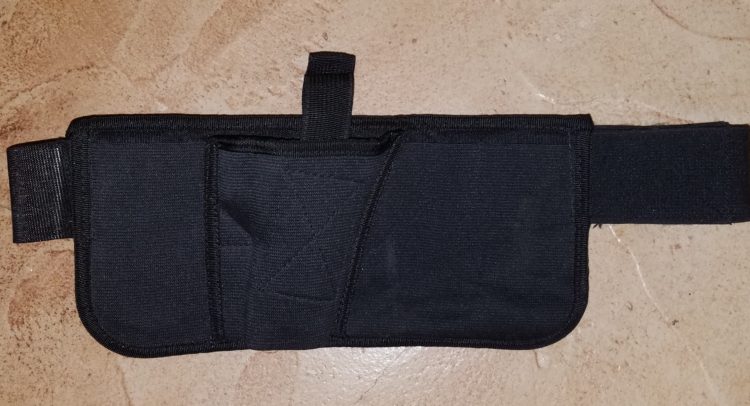 Brave Response Holsters were kind enough to send me a holster to review and I’ve been using it for several months.  My wife stole it a month ago though, so I have at least three months of observations to share.  While not being a belly band holster fan, I recognize I needed a holster that would carry my gun when I wasn’t wearing belted trousers or shorts.  I’m also in Florida and it gets hot.  A belly band is a must for loose unstructured clothing wear (consider the gym or lounging at home) as well as the long car ride.

Holsters require support to keep that chunk of steel secure.  I’ve owned several belly bands that never left me satisfied.   My number one complaint was the elastic used for the holster pocket squeezes the gun out of the holster over time.  Also, I’m forever uneasy with the ability of the elastic to keep the gun securely against my skin.  During vigorous movement I’d get a little of the “floppy gun” syndrome.  “Floppy gun” is when your gun gives you a slight pat during vigorous movement.  A gun slapping against one’s body tends to draw ones hand to hold the gun flush against your body which is a “tell” experienced concealed carry practitioners detest.  I do not have this problem with the Brave Response Holster.

I wore the holster almost daily but primarily when I got home and put on gym shorts to lounge around the house.  The elastic strap is two inches wide.  The pad the holster is sewn to is made of a breathable fabric which didn’t promote a hot spot on one’s body.  This is a significant concern in hotter areas.  When worn with my normal clothes the holster did its job, though I found the cant made drawing from appendix carry a little awkward.  My preferred holster position is around 2 o’clock.

FLASH!  I just learned they’ve released an appendix carry version of the Brave Response Holster.  It features no can’t and only one ammo pouch.  It just made my must buy list.

My general thoughts about the Brave Response Holster is it is very light and low profile. Besides the weight of the gun the holster doesn’t have much of a physical footprint.  It’s extremely easy to put on and take off which makes for a very handy holster to throw on to walk the dog.  I also like that one can pull the holster up to your chest to use the bathroom or if your wardrobe supports that positioning.

The holster is soft sided which makes it difficult to holster one-handed and a hassle to practice multiple repetitions of one’s draw.  I’d love to see the incorporation of kydex into the outer holster shell but that would limit the wide variety of guns that fit in this holster.  Maybe a metal or plastic brim to create an opening facilitating reholstering? 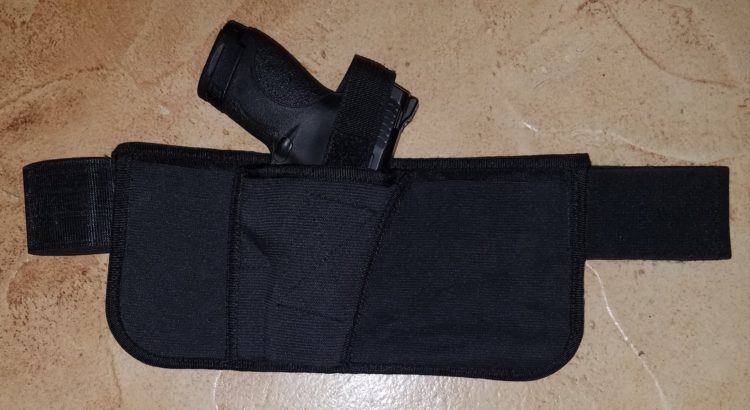 I am very impressed that the Brave Response Holster fits an exceptionally wide variety of guns.  It handled a Colt government .380, a 9mm M&P Shield, Glock 19 (W/RMR) as well as a full-size Glock 17.  Guns with an added under barrel light will not fit in the holster.  The optional adjustable backstrap can add an additional level of retention if one needs/wants it.  I didn’t feel it was needed when wearing pants with a belt which was simultaneously disconcerting since I wear more substantial and structured holsters.  The pad’s pliability allows the holster to move with you when you turn, crouch or bend enhancing its comfort rating. 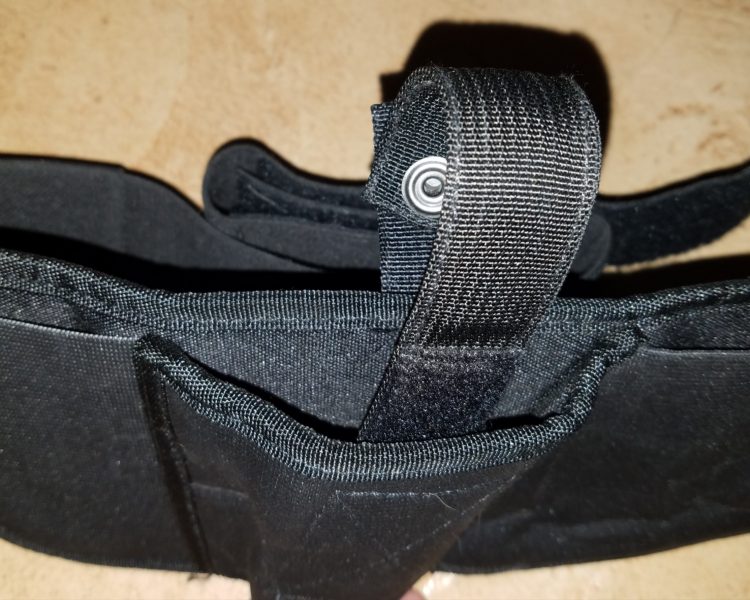 I loaned my wife the sample Brave Response Holster because she was the passenger in a car accident and felt discomfort using her regular holsters.  I haven’t seen it since.  She wears it all the time now.  Women have unique holster needs because fashion often makes it hard for them to use conventional outside/inside the waistband holsters.  A big issue being many of women’s fashionable and dress clothes don’t use belts. The Brave Response Holster is ideal for these situations. 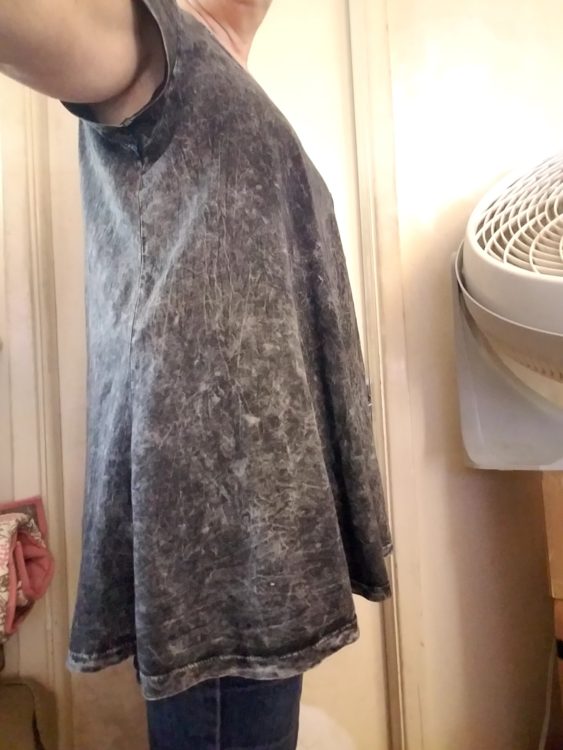 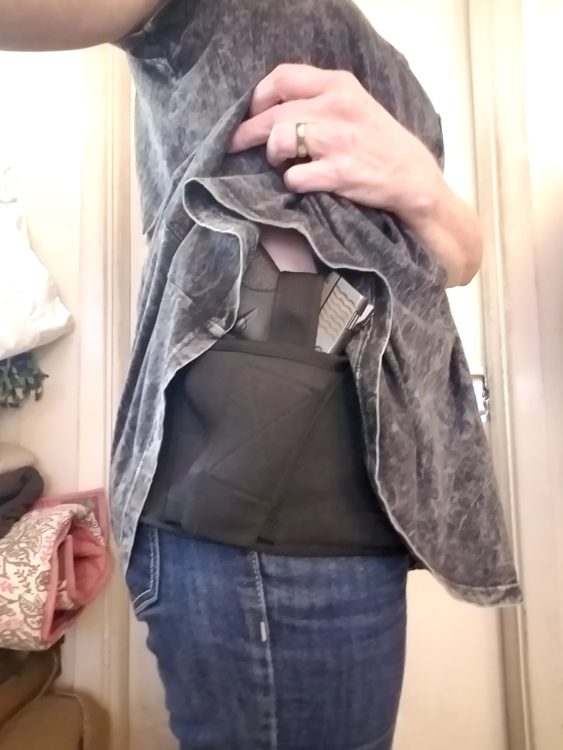 The Brave Response Holster allows for some very flexible wear options supporting carrying of a pistol inside or outside the waistband from two to five o’clock.  Cross draw is not possible because of the cant but the holster could easily serve in a lot of everyday situations.  The holster is also available in a left-hand version.

One of the things I immediately noticed about the holster was the magazine pouches ae on the same side as the gun.  I contacted the company to ask why and they made a good point.  While many of us that carry a spare magazine do so on our support side, many folks don’t carry a spare magazine.  More importantly, by placing the magazines in the dead spaces in front and behind the gun overall space required for am IWB holster is minimized saving one from having to buy a larger size pair of pants to comfortably carry a pistol.  For those that really want a magazine on their off side an optional magazine carrier is available.  The magazine pouches will also fit a folding knife or small flashlight freeing up pocket space and lessening the weight on a pair of pants that don’t have a belt to keep them up.

Quick donning for walking the dog.

Fits a WIDE variety of guns

Available for left and right-hand users

Not hot/constricting like a four to six-inch belly band

Spouse has been unable to wear conventional IWB holsters due to tenderness from a car accident.  Brave Response Holster doesn’t present that problem (allows spouse to carry again)

Its comfort is countered by a sense of looseness or lack of substance which is more a psychological problem for those used to wearing traditional holsters.

Mags on strong side to save space, an optional off-hand side mag carrier is available.

Would like to incorporate a semi hard shell to facilitate reholstering with one hand.

Appendix carry difficult with holster’s cant but they’ve just released a version without a cant if that’s your preferred manner of carry.

The Brave Response Holster is a must have holster for the serious concealed carry practitioner as well as the novice.  It has tremendous flexibility in both uses and the guns it supports.  The holster is robust enough to serve as an everyday carry holster with just about any wardrobe to include wearing one’s shirt inside your pants.  It is light, cool and comfortable.  For those who swear by other holster to include kydex holsters like myself, the Brave Response Holster is still a holster one absolutely needs for when you wear clothes without a belt.  As I’ve already mentioned I’m actually buying a second one since my wife isn’t giving me the one I lent her back.