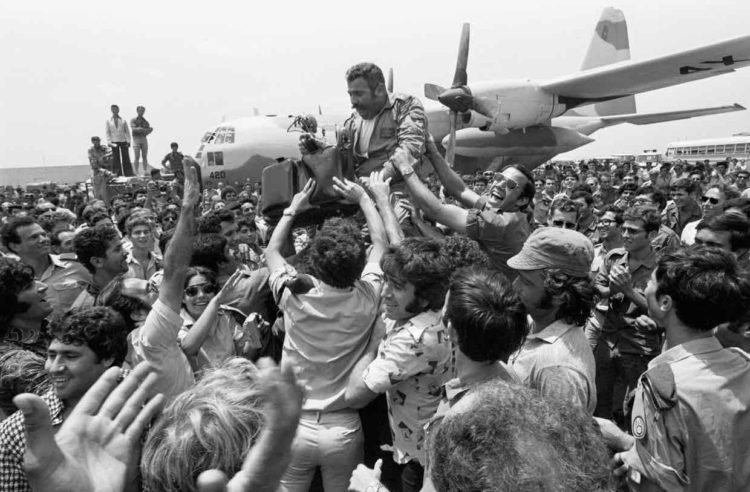 Anyone who likes war movies and was alive in the 1970’s perhaps remembers the 1977 movie the Raid on Entebbe.

The movie was directed by Irvin Kershner who also happened to direct the Star Wars movie The Empire Strikes Back. Peter Finch and Charles Bronson starred in Raid On Entebbe.

The movie was based on actual events. In July 1976, an Air France flight from Tel-Aviv to Paris via Athens was hijacked and forced to land in Entebbe, Uganda.

The film recounted the events and response of the Israeli government and the controversy that the rescue stirred.

Another production beat Raid to the screens and it was called Victory at Entebbe.

Victory had an all-star cast that included Elizabeth Taylor, Kirk Douglas, Burt Lancaster and Anthony Hopkins. That movie was rushed through production by ABC and broadcast one month earlier in December 1976.

A crowd lifts the squadron leader of the rescue planes on their return to Israel. Photograph: David Rubinger/Corbis via Getty Images

2018 brings another version titled Entebbe for a new generation of viewers and also for those who watched the news of the event live on television. Again, four hijackers take over an airplane, take the passengers hostage, and force it to land in Entebbe,Uganda. The goal of the hijackers is to free dozens of Palestinian terrorists jailed in Israel.

According to deadline.com, actors Daniel Bruhl, Vincent Cassel and Rosamund Pike are all in talks to join the Entebbe cast. Greg Burke, who wrote Yann Demange’s ’71, wrote the screenplay. Deadline wrote:

“Padilha, who shot to prominence with his gritty police crime tale Elite Squad — which won Berlin’s Golden Bear in 2007 — will bring his research-based documentary background to bear as he did so successfully in both Elite Squad films, his searing documentary Bus 174 and, of course his brilliant Pablo Escobar Netflix drama Narcos. Padilha will examine the story from multiple points of view – the German and Palestinian hijackers, the Israeli (and other nationalities) hostages, as well as Israeli officials like Peres and Rabin.”

Israel’s newly installed elite Sayeret Matkal commando unit was tasked at that time to rescue the hostages. They would succeed in rescuing all 103 hostages but their brave leader, Lieutenant Colonel Yonatan Netanyahu, was killed. The military raid defied all odds and the world marveled at the Israeli’s audacity.

With Padilha at the helm of the movie it should be quite good. Well, the trailer is out!