When you are planning to run an ultra, or any race for that matter, there are a number of challenges that you are faced with. You try to have a plan for what you will eat and drink, what you will carry, and what you will pick up at Aid stations.  You prepare yourself mentally for the competition, the challenging sections of the course, and the pain that you will put your body through.  But often times the hardest challenge can be overlooked.  In this case that was getting up at three in the morning.  As it turned out when three A.M. rolled around on Saturday I was not up to this particular challenge, so I reset my alarm to 3:30 and went back to sleep.

Unfortunately the inevitable can only be prolonged for so long, and less than an hour later, along with my faithful crew (wife Leah, and my brother and sister), and fellow racer Jordan Whitlock, I was boarding a bus for the short ride to the start line.  Fast forward one more hour and I found myself, along with several hundred fellow crazy people who would give up their entire Saturday to run 50 miles, charging under the start banner and into the dark misty woods, months of training and planning behind us, 50 miles of mountains, rocks, and adventure ahead.

The course at Bear Mountain wasted no time getting down to business. After 200 meters on a paved road at the start the course dropped down a hill into the woods and we were scrambling down a trail that resembled a semi dry creek bed.  I settled into about 4th or 5th place running next to my friend Jordan and tried to enjoy the friendly conversation and stay on my feet until the sun came up. 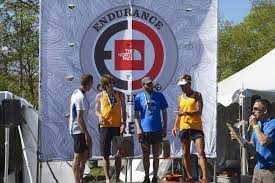 There was still a large lead pack as we hit the first aid station, I tossed my bottle and headlamp to Leah and she handed me a full bottle on the run.  Now that’s quality crewing! A few miles after the first aid station things started to thin out a bit as we hit the first real climbs.  Mike Dixon, recent winner of the Vermont 50 held a small lead, and I ran in the chase pack with fellow TNF athlete Leigh Schmitt, Ben Nephew, and Brian Rusiecki who was just coming off a very solid 6:14 win at the Bull Run 50.  The humidity was very high for spring in NY and even though I had an easy rhythm going I felt that I was breathing harder than I should have been as we topped the early climbs.  Coming through the second aid station I swapped my bottle on the run again and continued back into the ever-present fog.

Over the next section of the course Mike continued to lead, as I settled in with Leigh, and Ben, who both looked very strong.  We talked a little while we tip toed over and through wet slippery rocks occasionally catching a glimpse of Mike up ahead of us.  We cruised through aid station three in the same order and entered what I consider the toughest and most scenic part of the course.  Each of the next three aid stations are separated by around 7 miles of rugged, slow terrain.  No aid for the next hour!

After scrambling over a gnarly rock section and through a swamp the course shoots up a rocky incline and out onto an open rock outcropping with 360 degree views.  To racers on Saturday this meant a panoramic view of white, as the fog continued to hang low over the ground.  The openness also allowed me to see Mike for a while and I picked up the pace a little to catch up to him.  Coming into aid station four at mile 20.7 Mike and I were running together and Leigh was only a few strides back.  At this point I had battled through some stomach problems but was feeling strong.  I left the aid station a few seconds ahead of Mike and as we came to a creek I decided to jump in.  I was warm and my feet were already as wet as they were going to get so I figured I should cool off, so I hopped into a deep pool completely submerged myself and then jumped back on the trail with Mike feeling like a new person. I would repeat this several times over the course of the day.

Over the next several miles I was able to build a small lead over Mike and Leigh.  Coming down the last descent to the aid station at camp Lanowa my confidence was hitting an all time high. The next thing I knew I was hitting the ground. Fall number two, a PR for falls during a race for me. There went my confidence! I picked myself up off the ground made sure I wasn’t hurt, and then continued down the trail to the aid station and mile 27. Following the aid station there I battled some more stomach issues, and the low points that everyone goes through during an ultra, but by the time I got back to Anthony Wayne with 10 miles left I had refueled and was feeling great again. 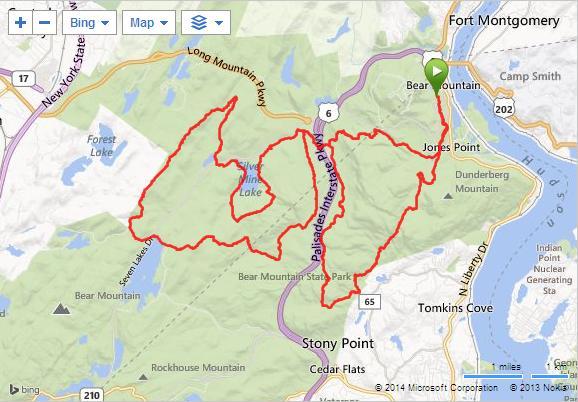 At this point I was told that Leigh was in second a few minutes back.  I hadn’t banked any more time on my lead since camp Lanowa at mile 27 so I knew he was running strong. The final 10 miles of the course flew by.  I felt strong and although I knew that I had picked up the pace I will admit that I glanced back a few times over the final miles to see if Leigh was in sight, especially during the climb over Timp Pass!  Once that final climb was behind I was able to relax a bit and enjoy the run into the finish.

It was a great feeling coming up over the final hill and seeing the finish line, my family and everyone that came to support me.  I wouldn’t be where I am without their support and encouragement.  I threw my arms up as I crossed the line, gave a prayer of thanks, and got a hug from Leah and my team manager.  A few minutes later Leigh crossed the line in second followed by Ben Nephew in third.  Brian and Mike were only a few minutes back rounding out the top five.  After I recovered for a few minutes I grabbed a hot meal and enjoyed the atmosphere as I watched Jordan finish out his race and my friends Bob, and Dan finish up their 50k adventures.  The North Face and Hawkeye do an amazing job of putting on events and it was awesome and inspiring to watch people celebrate as they crossed the line and reached their goals.  As for me my goals for the day were achieved, now it was time for recovery and preparation for my next set of goals.  Only four weeks until Endurance Challenge DC!  Should be fun!