I swore I would never become a trigger snob.

I believe I have succeeded.

The same can be said for the SCAR series rifles. The stock FN single-stage triggers with their moderate weight and clean break (on both of my rifles at least) would lend themselves to perfectly adequate marksmanship using applied fundamentals.

So why switch them?

Why does every rifle I own that has the option to run a Geissele trigger do so?

Simple, they are the best triggers for applying combat marksmanship fundamentals. Each product they offer is purpose built for a specific application and to maximize on the disciplines involved in executing that method of shooting.

This is a combined review for one reason. The Super SCAR and Super Semi-Auto – Enhanced are, with the exception of mean (average) stage weights and platform, the same product. In fact this review gives a good overview of Geissele’s entire combat trigger line up.

The SSA-E and SuperSCAR are two stage combat triggers for two current service rifle families and their derivatives. These are the non select-fire versions of the products designed for the semi-auto only counterparts to the service rifles.

Geissele has a keenly focused understanding that they build combat grade equipment for warfare. In every product they design that focus remains, even those designed for the competitive sporting fields. They demand absolute reliability inherent in their design.

The reduced pull weights are secondary to the trigger maintaining or improving on the rifle’s ability to ignite a primer and a send a round to end an enemy combatant. Then reset and do it exactly the same way next pull.

What is Two-Stage? What are the Advantages?

The stock ‘Mil-Spec’ AR-15 and SCAR triggers are single-stage. With a modest amount of travel during their pull they break once the pull weight is reached. On release and reset they take up pretty much the same position they were in prior and will once again travel and break at the weight range designated, usually 6-9lbs of pressure depending on the individual rifle.

Two-stage triggers change the pull action to have two distinctly separate operations. The first stage has a lighter mean engagement weight, listed as 2.3lbs and 2.5lbs for the SSA-Eand SuperSCAR respectively, where the trigger will travel freely and smoothly reward against the trigger spring.

This 1st stage removes the ‘grit’ of the trigger’s metallic surfaces interacting that is often a complaint of single stage triggers. Additionally this allows the operator to ‘stack’ the trigger. It’s an orange zone if you will, you can prepare for a shot in a safe manner with a distinct stop before the shot breaks by taking up the first stage but still have the ability to safely release the trigger if the shot is no longer a tactical necessity. The operator must still be very aware of how close they are to breaking the shot and ready to judge if they go from orange to red and fire or orange to yellow and the finger comes off the trigger, but the trigger design allows this to be done much more precisely and safely than ‘mil-spec’ designs where the amount of give and movement prior to ignition is always a guessing game.

The 2nd stage is is the ‘wall’ or stop point you hit after smoothly pulling through the first stage. This stop is the final preparatory action before committing to the shot. The machined geometry of the trigger mechanism makes the trigger travel at this point minimal so that reaching the required break weight pressure, 3.5lbs (SSA-E) total and 4.0lbs (SCAR) total, will fire the rifle while minimizing sympathetic motion transfer often imparted through the trigger press.

Minimizing the sympathetic motion transfer, all the extra movements the operator is imparting to the rifle while squeezing the trigger, will increase accuracy. It’s this purposeful design, more even than the lightened pull weights, that unlock more of a rifles inherent mechanical accuracy.

Going from 0lbs pressure through your finger, hand, and arm to 6-9lbs is not an insignificant change. Depending on how the rifle is equipped you’re imparting 50-100% of the force necessary to move the entire rifle just to the trigger and the trigger will have to move a short distance before firing.

Finally the triggers are designed to reset for firing just forward of the 2nd Stage so that a shortened take up of the first stage puts the operator right at the firing point again while still going through both stages distinctly. This again minimizes required motion to fire the rifle while improving control.

These fine triggers do this while not compromising the reliability. Geissele uses springs and hammer designs that impart the full force of mil-spec hammer impact onto the firing pin.

A common method of lightening trigger press weights is to change the springs to lighter ones which compromise a rifles ability to properly and consistently ignite primers, Geissele would not accept that. I am very happy they wouldn’t.

Will it Make the Rifle More Accurate?

The rifle’s mechanical accuracy is inherent in the quality of the barrel and action.

They can, however, allow you to shoot more accurately and get closer to the rifles mechanical accuracy.

Installing an SSA-E or SuperSCAR trigger will lighten the trigger pull weight as the most noticeable change.

This is an expensive way to possibly improve your current accuracy an unimpressively mediocre amount.

But if the operator (you) are versed in the proper fundamentals of accurate shooting and apply those, you will find significant gains in how easy it is to apply the fundamentals to your shot.

You will become faster, smoother, and more accurate since the mechanism you’re using properly requires less force from the user and less motion from the user to fire. The trigger is minimizing the windows for operator imparted errors during shooting while maintaining safety and reliability.

These 2-Stage combat triggers are designed to work against possible negligent discharges with the ‘feedback through feel’ it imparts through the rifle to the operator, the trigger reset is not right at the firing point, and imparting full ignition force to the primer.

Geissele triggers are the best of all worlds…

If you are doing your part. 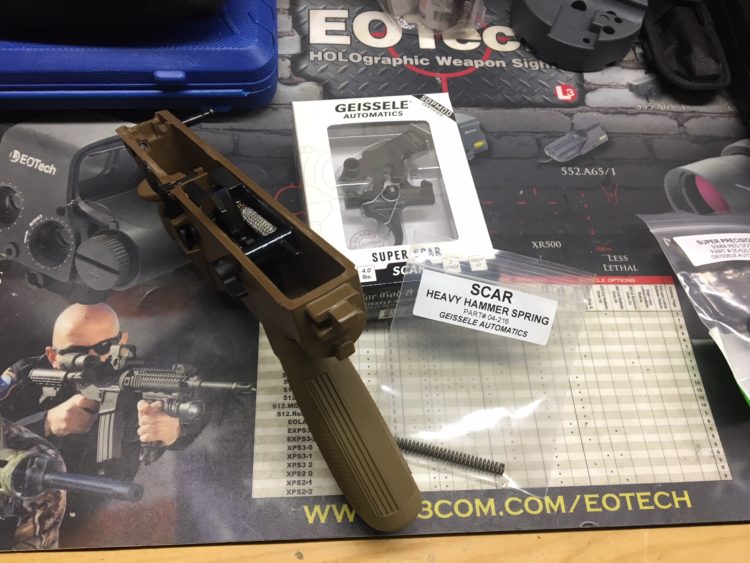 Both the SSA-E and SuperSCAR make the install as painless as possible while dealing with parts under tension.

They helpfully add instructions and ‘cheater’ pins that help hold parts in place while trigger and hammer pins are pushed out and in.

Bill goes into great detail here and the SSA/SSA-E can be installed by hand with very little assistance and a couple tools.

If you’re looking to maximize the performance of your rifle first… square away your fundamentals.