Welcome back to the second part of the Top 10 unwritten rules of CQB series. In the previous part we talked about the first two rules about Sight fixation & Flashlights. Lets continue to our next two rules.

But before, we would like to remind you that these ‘rules’ are more of a reminder of things that many forget or not aware of. In this series of articles, we will discuss 10 of the most important, unwritten, rules of CQB.  Warning, this article is very in depth and provides a lot of information.

I will be honest. I was not sure if I should include this point in the list. It requires a somewhat mature intellectual approach filled with experience and glitter on top of it. Dividing the threat attention, or in other words messing up his OODA is one of the most important principles. Especially when the threat is oriented and you got no other mean to distract the threat. However, before I am going to dig into it, it is necessary to give an example in a bigger form.

When we used to practice raids in small unit capacities on fortified compounds, we used to employ a very simple known but effective technique. We used to refer to it as suppress and flank.

While it consists on more than the name suggests, it would work like this:

1. Initially a certain element opens fire from either one or several positions with heavy / accurate / indirect weaponry in three different phases of fire.

2.After minutes of pounding the target, another element(s) begins to deliberately flank and penetrate the OBJ from specific direction(s).

3. By exploiting different angles of attack, the enemy will start to split its strength concentration behaviorally into smaller pieces which are easier to handle. Those pieces are automatically reacting to what they see.

4.Than by splitting its strength and having its leadership OODA loop constantly interrupted, we force the opponent to react quite slow and raw in its detail or in other words – we reduce its strength and ability to immediately respond.

(Figure A) Bigger picture – Small Unit Tactics (SUT) of outnumbered medieval age knights who are dealing with force concentration. note the same principle of Threat divided attention aka Split Force which is being used to thin the opponent’s resistance. IMPORTANT – formations are not similar to the modern formations due to trajectory and FF.

Taking this into the micro cosmos of CQB…

..Where things are fast, and has the same mechanism of Assault VS Defenders, we used to employ the same principle but in slightly different way to increase our survivability chances. A divided attention work at best in, for example in “known” type of entries.

One person is acting as a ‘bate’ as he moves fast into the known direction, deliberately drawing attention by movement or sound from the threat forcing the oriented threat to shift his attention to the fast moving picture, while the Point man  follows in to engage the threat from cover. While the threat is basically doing what humans or animals do when receiving new unfamiliar information stimuli, he will basically be forced into reestablishing his subconscious OODA not to be interrupted a moment later by the next team member which will gain a trajectory on him.

I´ll give you another example that we use specifically in low to no light conditions. One person enters the room in X direction with a strong source of light aimed on a human, while the other members entering in Y direction initially without lights, concealed by contrast and darkness. Here the effect is even way more devastating for the threat since he will be essentially blind and fixated on the source of light.

We teach the same principle even to patrol officers who approaching a person in an open space, say a parking lot, for the purpose of communication or search.

Soon as the officers perceived danger or the officers are getting into the combative bubble, they may began to divide attention, essentially breaking off laterally, turning one picture into two and forcing the observing individual into recycling his decision making and overloading the amount of data perceived. What we teach normally next is that one teammate does the talking, drawing verbal and visual attention, while the other remains quiet, aware & exploiting the opponent flanks for better cover of his partner, view and proper fields of fire.

From observing, orienting, deciding and eventually the acting point of view, the threat is forced into 2 dimensions of considerations. More data to process, less time to react. A mental physical cage. 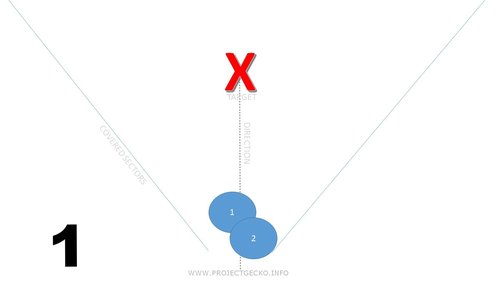 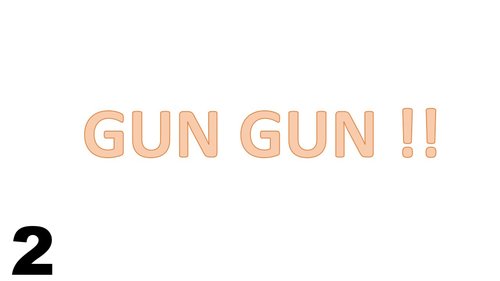 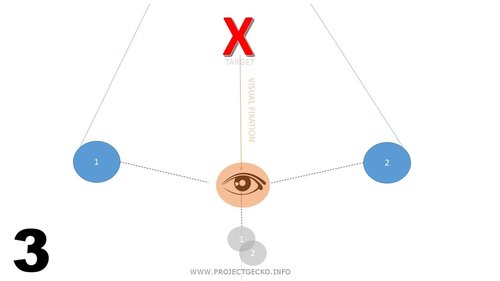 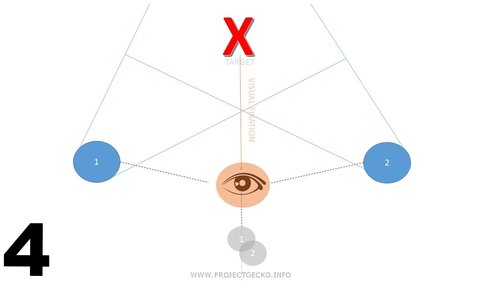 Threat divided attention, or as some people might be familiar with similar concepts such as ‘’running the rabbit’’, it is all about exploiting your opponent’s human limitations. Some people will frown upon Running The Rabbit (RTR), but it did work for us and to other people I know. It’s all about human performance.

Remark – This rule refers to within structures.

Back in the day when I served in the Israeli Defence Forces (IDF), the first Close Quarters Battle (CQB) course we took was obviously a basic standard infantry level program. You know, corners and box rooms. In that course it was a standard that once a person gets to his corner, he immediately goes into kneeling to ‘’avoid’’ the first bullets of possible resistance.  With the years and progress of training, this methodology was quickly dismissed by my unit CQB instructors, but it was reality that made me really understand how stupid & potential death sentence that kneeling can be in CQB premise. 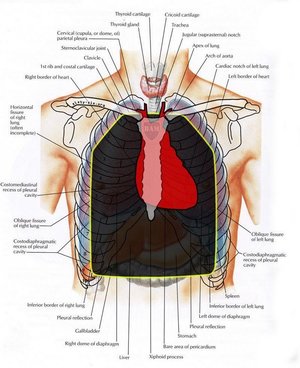 Before we get into why, it is important to highlight the difference between the trigger and switch zones that a threat normally has. (Remark – explanation is short and raw on purpose)

Back to the issue. ….By kneeling the individual is not only losing mobility, but often replacing a ‘trigger’ zone (aka plate) in a ‘switch’ zone (aka your head), making any kind of impact around that zone more than just a shitty day. Why is it important to highlight this issue? Because the majority of tactical institutions are still teaching in their basics kneeling and crowding covers in context of 10 feet or below contacts. 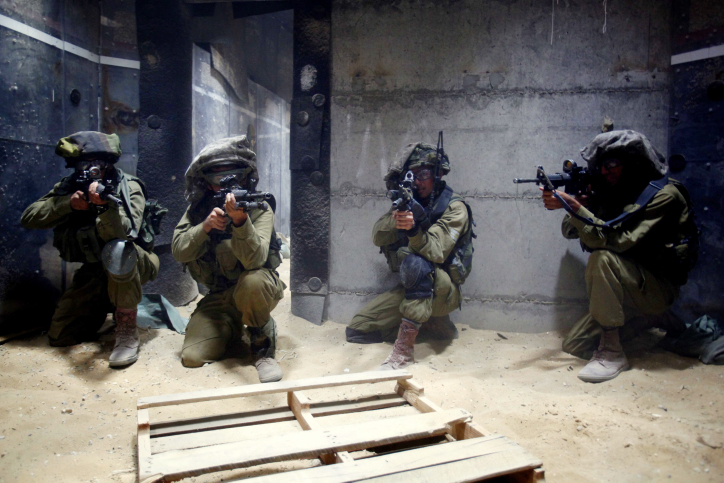 Can you see the issues ? (answers below)

While in the majority of kill houses I’ve trained at the environment was a simple empty box room with one to two doorways; reality is very different. Interconnection of several compartments, doors, hallways and other partitions exist in any warehouse, apartment or tunnels and it will require the team to be responsive and take on the challenge as soon as possible. By kneeling down, reaction time is increased and often visual view is less general and more fixated. Getting people to reinforce others by numbers is critical in multi room clearing. Mobility is the key; accuracy is the lock. 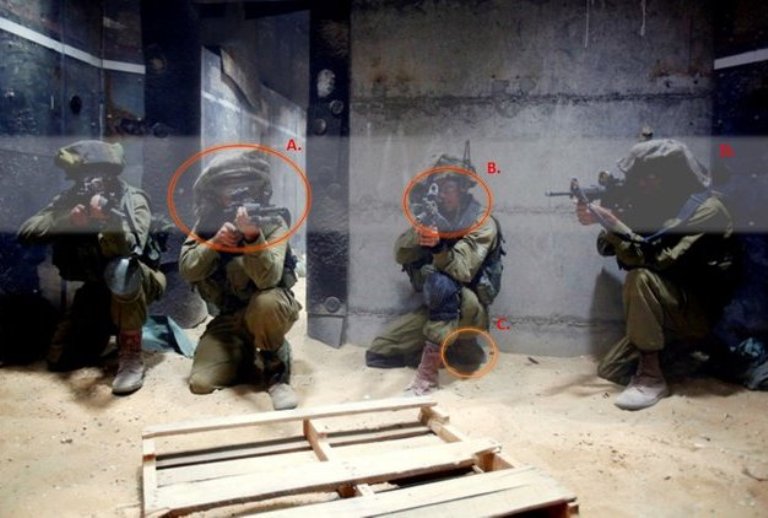 A. Deadly narrow field of view   B. Sight Fixation   C. Mobility lock   D. All heads in the mid section.

Additional stuff I have recognized –

2.       Losing orientation on additional team – mates who are moving around.

4.       When humans are afraid or the need to self-preserve is initiated, that last thing a human likes to do is to settle down and wait (freeze is a different phase).

With that being said, kneeling should be avoided in most cases unless working a threat from the door way or concealment / cover (HL for example). There are several reasons, but the major and most important one is the simple fact, that by kneeling the person simply replaces its plate carrier in a piece of head.

Thanks for reading, and stay tuned to the third part of this series ! Read Part 1

The instructors behind Project Gecko are all former military personal with extended training’s and combat experience. Eliran founder of Project Gecko was born in Israel. Before he moved to Germany he served in the IDF in one of the SF units.

Be proactive, not reactive. We wish you a safe traveling.