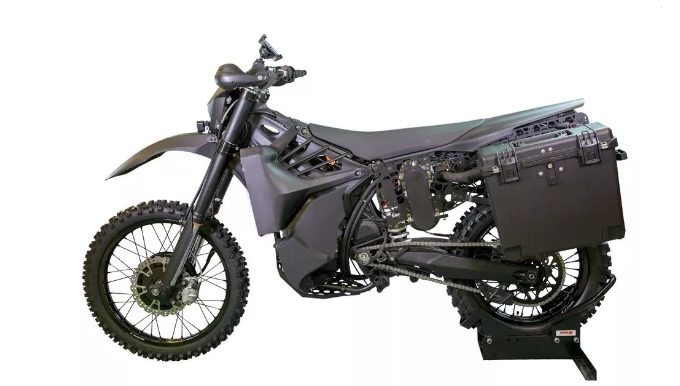 “Because they’re motorcycles and they’re relatively small, you can put several of these in the back of a V-22 and they could be dropped off somewhere,” said Doug Rombough, VP of Business Development for Logos Technologies. “They could go 50 miles, and when they get within 10 miles of an objective, they could shut off that multi-fuel engine, and go all-electric—the only noise [they] will produce at that point will be the noise of the tires on the surface and or the chain of the motorcycle.” 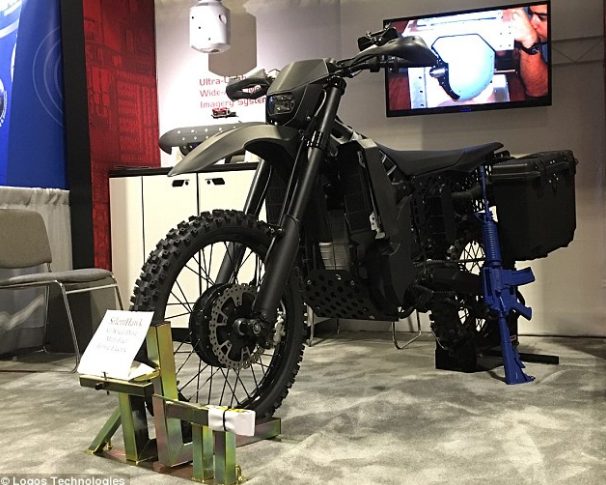 SilentHawk lead engineer Alex Dzwill says it produces less than 55 decibels, or about the sound of normal conversation.  “Literally the loudest thing is the chain, and it’s possible for us to outfit a belt, though there’s a whole host of reasons for why you wouldn’t want a belt on a dirt bike,” said Dzwill. “If you get a rock in there, it’s very likely that you’ll rip the belt up, but if you’re in a sandy location like the desert, it’s possible you could use a belt and be fine.”

NOT the Silent Hawk

“Quiet, all-wheel drive capability at extended range in a lightweight, rugged, single-track vehicle would support the successful operations in extreme terrain conditions and contested environments,” said Wade Pulliam, manager of advanced concepts for Logos Technologies. “This award enables us to continue to execute a fast-paced development effort that takes advantage of our team’s prior work, superior technical approach, and extensive experience.”

During Phase I, which began in February 2014, Logos and Alta conducted extensive performance testing on the RedShift MX in multiple terrains and riding conditions to help understand the requirements for an off-road military motorcycle. Using this data, Logos demonstrated the suitability of its hybrid-electric system to meeting actual off-road power requirements. The result of Phase I was a preliminary design, backed by significant testing and modeling, which Logos intends to turn into a prototype during Phase II. With most critical requirements of the system already demonstrated, the Logos-Alta team plans to proceed with an aggressive Phase II program plan, with the goal of developing and testing the first operational prototype in only 18 months.

“An innovative design approach, including a unique field-swappable power system concept, will allow unprecedented customizability of the bike while still meeting and exceeding the government’s challenging requirements,” added Pulliam. “We also believe that the system resulting from this second phase of the program would have applicability to other ground vehicle systems beyond motorcycles.”