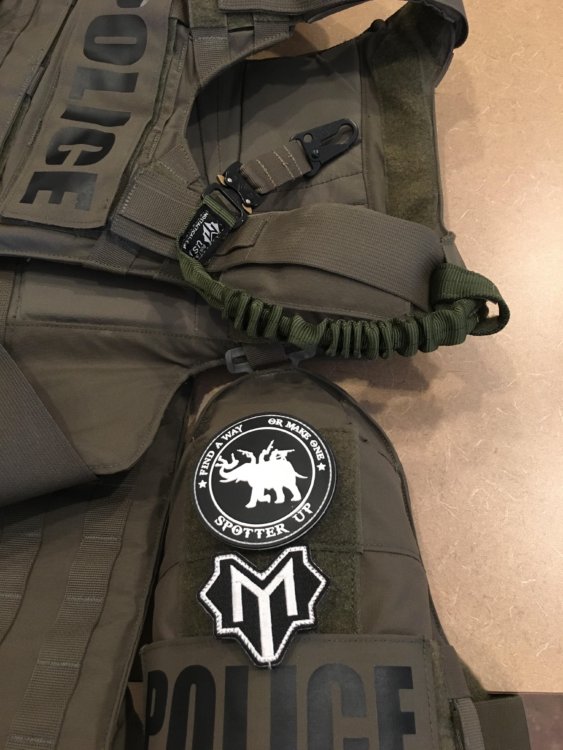 Customizable gear.  Lifetime warranty.  MADE IN THE USA.  Unheard of customer service.  If these phrases don’t get your attention, I don’t know what will.  That being said, you should ABSOLUTELY go check out the MOS Tactical website.  They have a myriad of products, and I have no doubt you will find things you might not need, but definitely want.

I was asked to review two products, both of them prototypes.  They also came with an MOS Scorpion Tail Sling, and a host of other pieces of swag to check out.

“Prototype 1” is about a 25” piece of nylon webbing that is doubled over on itself, with triple-stitching running almost the entire length.  At both ends is a loop, made of the same piece of webbing, that will be attached to you body armor, plate carrier, chest rig, etc.  At the end of the loops are three more rows of stitching.  In the middle of this is a metal, “g-hook” that is the attachment point for the MOS Scorpion Tail Sling.  The g-hook is adjustable in that it can be moved along the length of the strap.  Essentially, this is a single point sling, that has dual attachment points, either the other loop, or the g-hook. 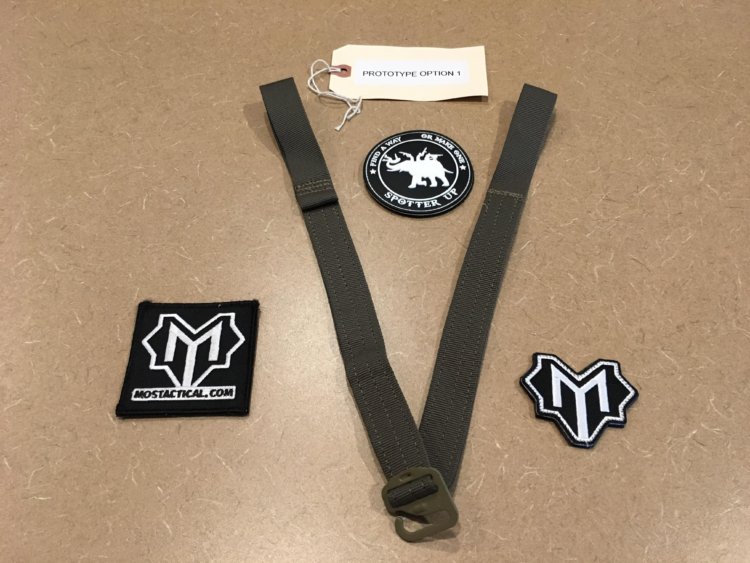 “Prototype 2” is about a 23” piece of nylon webbing.  On one end there is the same loop I described above.  The other end is meant to be folded over onto itself, and held together with velcro so it doesn’t come unraveled.  Between the loop on one end, and the velcro “keeper” on the other end, is the same, metal, “g-hook” that can be slid up and down the length of the strap.  Again, this hook is meant to be paired with the Scorpion Tail Sling.  Like Prototype 1, this too is a single point sling, but only has a single attachment point to your gear. 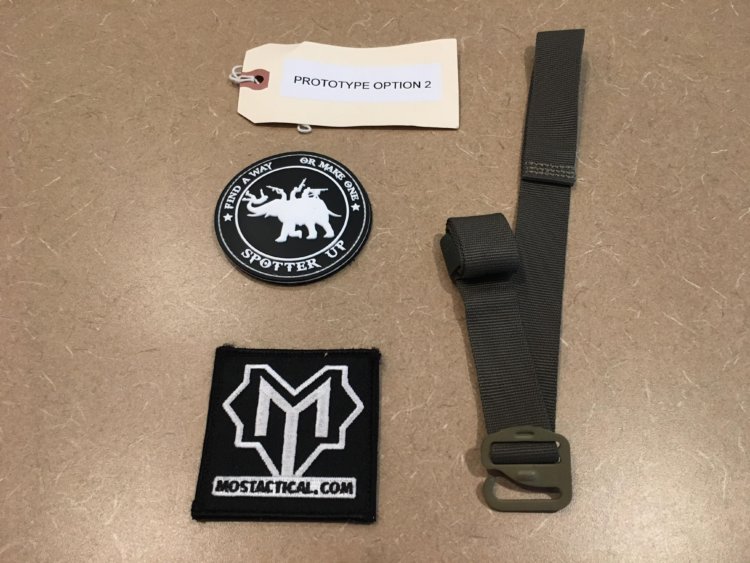 The Scorpion Tail Sling (STS) is about a 21” long bungee sling that when stretched out, stretches to about 27”.  On one end is your specified attachment point to your weapon.  You have five choices: “clash” or HK style hook, mash hook, quick detach swivel, g-hook, or the MOS retention hook.  This attachment is connected to about 3” of webbing material, with the other end of it being a small Cobra buckle.  The opposite side of the Cobra buckle is the bungee part of the sling.  This part is about 15” is length.  The end of it is a loop, that is meant to fit right onto the g-hook of the Prototypes. 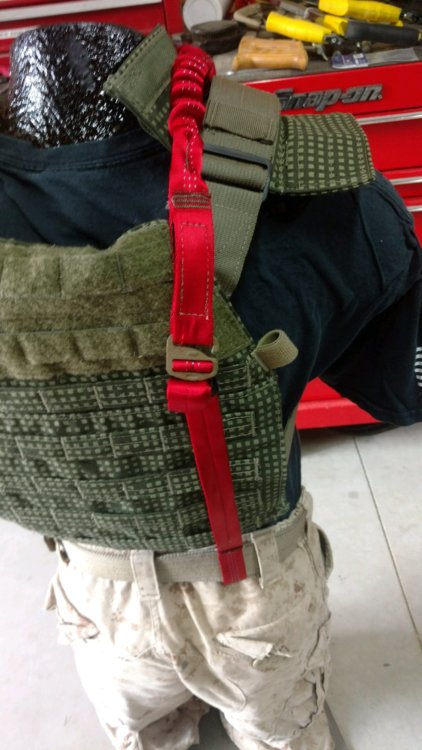 The quality of the products is amazing.  It’s made in the good ol’ U. S. of A., so it should be.  ‘Murica!  The nylon webbing itself seems to be pretty standard, 500 denier.  But in the case of Prototype 1, it’s doubled over on itself which makes it that much stronger and more durable.  The stitching used is triple-stitched at any attachment or “stress” point.  And the g-hook is metal, sewn into the sling itself. 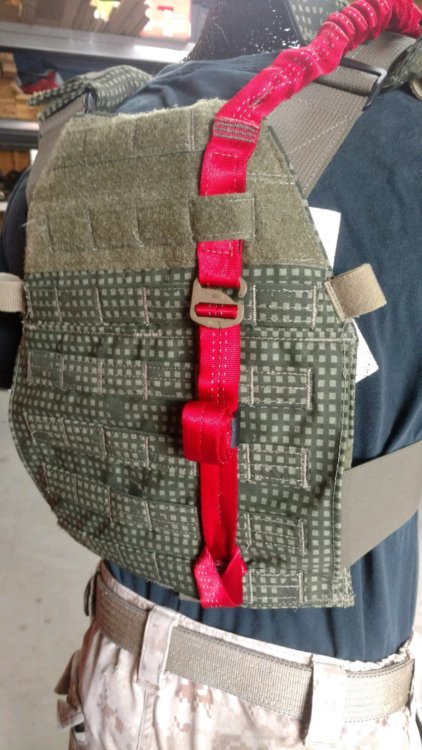 Regarding the Prototype 2, the same things can be said; same webbing, same stitching, g-hook sewn onto the strap, etc.  However, a little detail that I really like, is that the velcro keeper is actually double-stitched onto the strap too.  So you’ll never have to worry about losing it. 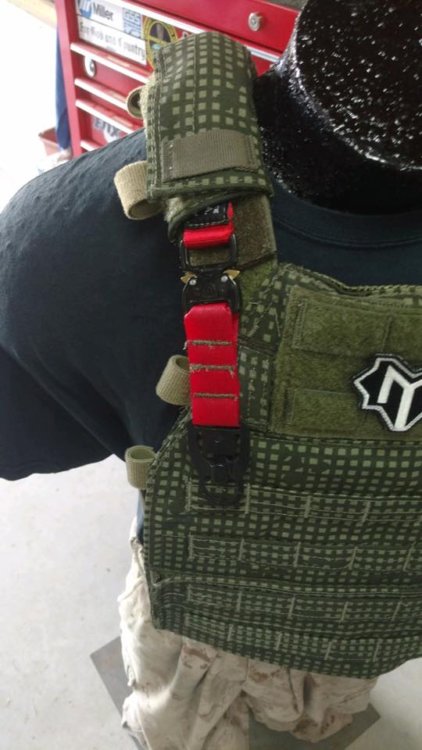 The construction of the Prototypes can’t really be discussed without also talking about the Scorpion Tail Sling.  The STS has your metal, weapon attachment point on one end.  This is attached to about 3” of webbing that is triple layered, triple stitched, with the other end being half of the Cobra buckle.  The other half of the Cobra buckle is connected to what appears to be a heavier-grade webbing, doubled over and triple-stitched.  Next comes the bungee part of the sling, which is about 15” long, including the loop.  Inside of it, it feels like there are two bungee cords inside instead of just one.  I like the redundancy!  The opposite end from the weapon attachment point is another loop, that has velcro on the insides to help keep the loop closed.  This loop is also triple-stitched closed, with even more stitching on it to hold the velcro in place.  This loop is the part that attaches to the metal g-hooks on the two Prototypes.  Or, much like the loops on the Prototypes, the loop on the STS could also be attached directly to your gear.

Overall, the craftsmanship is bombproof, and at a bear minimum, “operator-proof.”  I have no doubt that if you are a fan of single point slings, You could buy this, and it’ll last you your career. 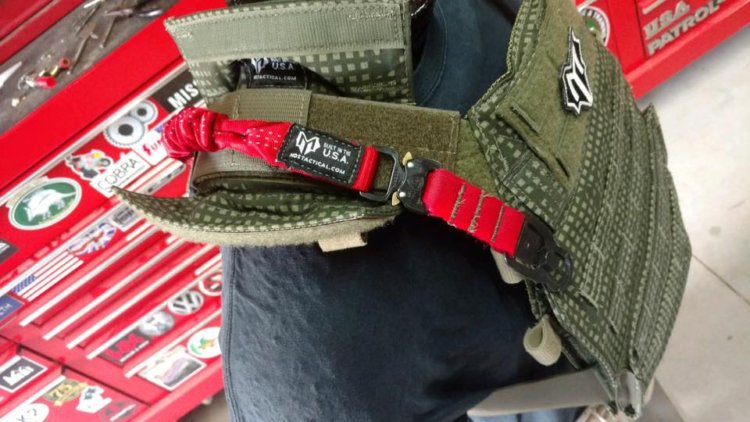 The Prototypes have no price associated with them.  However, and this is merely speculation based on looking at what all of their slings and weapon retention devices go for, I surmise they could be in the $20ish range?  If so, and if this type of device would work for you, that would be well worth it.

Obviously the price of slings fluctuates based on the company, materials used, etc.  But if you buy the STS, and one of the Prototypes at a possible price of around $20, you’re easily into the setup probably $70-$80 depending on tax/shipping and handling.  That seems a little high for what is really a single point attachment sling.  All cops are cheap, but on the other hand I’ve always subscribed to spending more for quality. 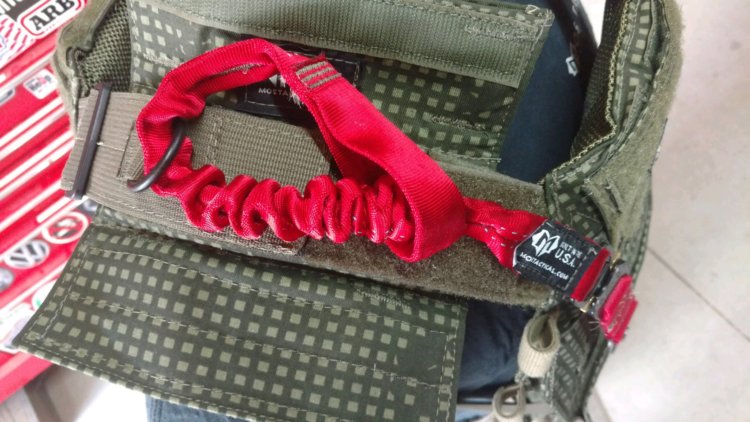 The prototypes didn’t come with any instructions, and I was left to try and figure out stuff on my own.  After not being impressed with either prototype, in any way, I decided to reach out to MOS, more on that later.

The owner of the company, William, helped this proverbial monkey with the two sent footballs.  He also made another Pototype 2, in red material, dressed one of their mannequins up, and sent me about 25 pictures, some are included in this article.

The loop end on either prototype is meant to be fed through a Molle attachment point, d-ring, carabiner, etc., and the rest of the prototype fed through the loop like a slip knot.  In the case of Prototype 2, the subsequent length can be adjusted with the fold-over velcro keeper.  One unique design thought is that either prototype can have one of the loops strapped to an operators web/gun belt, the belt fed through the loop, and the rest of the prototype fed up/over an operator’s back.  I don’t think this would be for me, but I know 35 guys on my team wear their stuff 35 different ways. 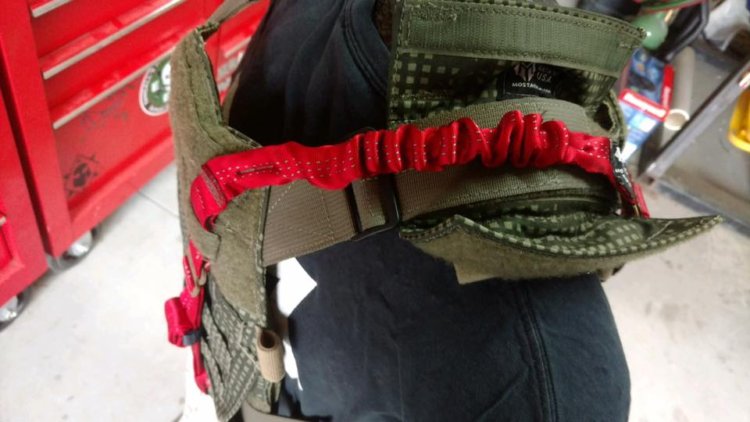 For me, I would probably cut out the prototypes completely, and just use the STS, and in ultimately trying this thought out, found it works best, for me.  I ended up attaching it to one of my left shoulder Molle points on the back side of my armor.  The way my rifle sits with just the STS is about where it rests when I wear my normal Chalker sling.  That’s right, it’s 2018, and I have rocked the 1980’s Chalker sling for my whole 18 year swat career.  I think I see change coming…

I also really liked the part of the STS that can stay connected to the rifle with the attachment device of your choice, and then quickly be attached/detached to the person via the Cobra buckle.  This can be really nice if you’re going to be wearing your gear for long periods of time, but want to put your rifle down while loading mags or taking a break from range drills.

The prototypes for me, add too much length.  And it’s an added strap, which if combined with the STS, isn’t necessary.  Another problem I could see happening is the STS coming off the g-hook that’s on each prototype, as there is no sure way to secure one strap to the other.  While unlikely, we all know if it can/could happen, it probably will.  At the end of the day I like the fact the STS can be attached to your armor on one end, the Cobra buckle in the middle, and the hardware attached to your weapon on the other end.  It’s the perfect length, one strap, I love it. 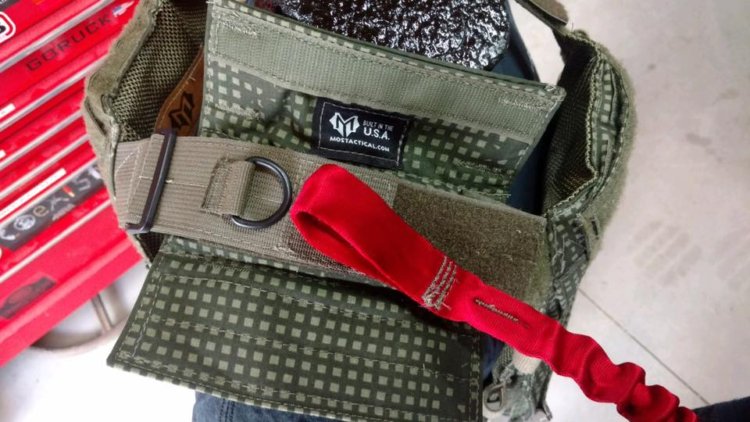 As stated briefly before, I spoke to the owner of the company, William.  We had numerous phone conversations and text messages.  I can tell you that William is all about pleasing his customers first, with putting out good, quality, American Made or American Standards products a very close second.  William is essentially an engineer now, but working on the degree to make it “official.”  And with his engineering mindset, he ensures that his products are designed to be bombproof, along with the creativity of getting the customer what they want.  If someone doesn’t see what they like on the website, it truly is as simple as calling up MOS and describing exactly what you want.  They will make it happen using any materials, any hardware.  And for you hunters out there, he is licensed to do things in Mossy Oak.

William said they prefer to make things in batches, especially custom orders, but can and will do one-offs for a customer, even if it means taking a loss for the company.  Shipping it to the customer is also a priority.  MOS is based in Virginia, I about fell out of my chair when he told me that he will, and has, driven a product to people on the east coast if that’s what needs to be done.  The owner, driving products to people, along the east coast.  Who does that?!? 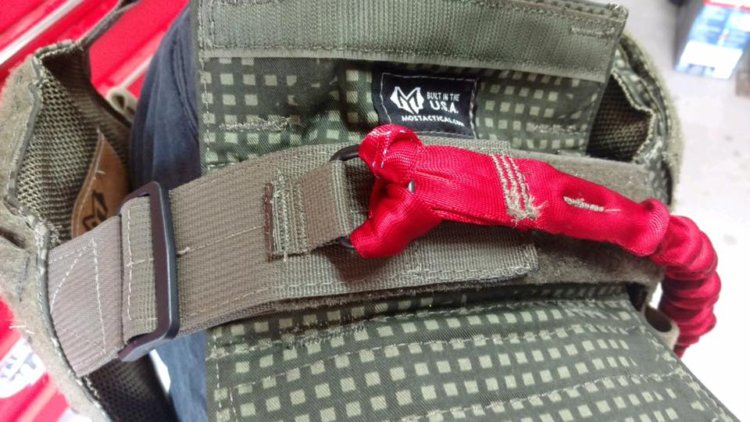 Overall I am very impressed with the mindset, quality, and construction of the products that MOS puts out.  This review was to mainly focus on the two Prototypes, which truth be told I think for me would just be superfluous additions to my gear.  But the quality of them is top notch and if I needed one, would absolutely order it.  What I’m excited about, not only for me, but people on my team, is the STS.

So if you’re looking for good, American made, no-questions-asked-lifetime-warranty, phenomenal customer service, MOS is a company you definitely need to check out!