Spotterup.com promotes the idea of the classical “whole” man found in ancient texts. For our modern day he is the GUNFIGHTER WRITER WILDMAN MONK: Man of Action, Man of Intellect, Man of Emotion, Man of Spirit. A Spotter is known as the consummate Chessman. He identifies issues, gathers information on the threats, devises a plan, and executes it succ essfully. In heraldry, the skull represents victory of life over death, and Thanks our spotter tower is a fortress that is a testament to his ability. Sometimes success is achieved by looking inside rather than beyond, and it is gained by listening to what you ‘know’. He is the sentinel that watches over others, himself, and learns in order that he can point the way out of danger. AUT INVENIUM VIAM AUT FACIAM-I will either find a way or I will make one. Legend has it that the military commander Hannibal said this to his generals after they told him it was impossible to cross the Alps on elephants. Shirt can be purchased here 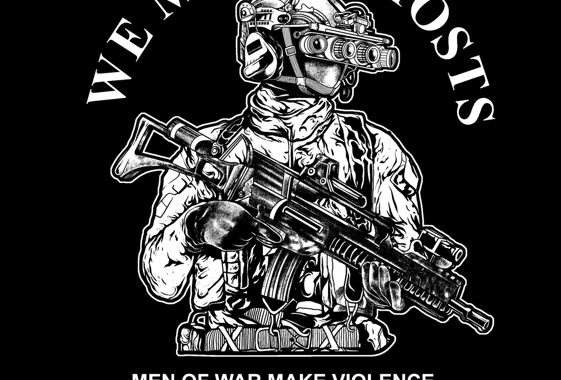 We Make Ghosts Art and Clothing