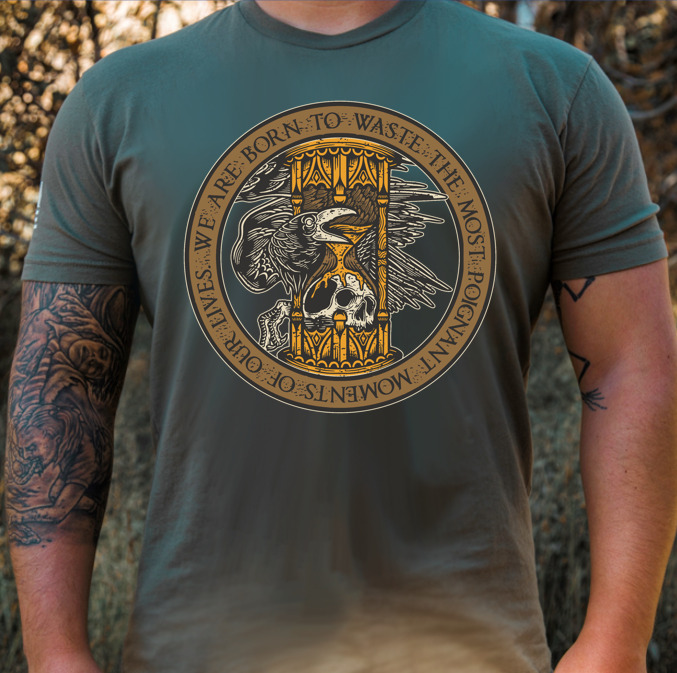 Our newest shirt called A Conspiracy of Ravens

The truth is all men have difficulty using new eyes to reexamine old hurts upon their injured spirit in a comprehensive way because it might reveal how the most poignant moments of that life was wasted. What should be dead shame is alive, and if a man wants to move further ahead he should examine if there is a single source of drainage stealing his energy or if there are multiple currents causing conflict. Sometimes the physical body shows no sign of damage but the spirit is seriously injured. Perhaps his indifference or his ignorance or his full disregard of his scar compelled him to move ahead in life but these are likely short term gains until the flow of power is fully interrupted as he experiences a long term loss to the whole. Just because a man’s spirit can take a lot of beatings doesn’t mean his mind holds a lot of good sense. The system will break. Why doesn’t he focus on the reasons for the powerlessness that is holding him back? Oddly, men sometimes suspect themselves to be frauds, to be incomplete, to be incapable of loving or taking love, to be incapable of success while simultaneously believing they are incapable of defeat. Perhaps it’s time for this dead man to reset the dead hands of his dead clock and bring his old life some new time.”

Ravens are associated with wisdom, death, prophecy, foreshadowing, intelligence and even bad luck. In ancient stories the raven represented the guide that directed or escorted dead souls from Earth to the afterlife. In our artwork we intend that the wearer be the raven and the usher. As a psychopomp, instead of being the pilot that helps direct them to the afterlife, you are the conductor that shows men with “dead” spirits how to come back alive. Be the influencer, be the arrow, be the one that shows others the way.