“The one who forgives never brings up the past to that person’s face. When you forgive, it’s like it never happened. True forgiveness is complete and total.”
― Louis Zamperini, Devil at My Heels: A Heroic Olympian’s Astonishing Story of Survival as a Japanese POW in World War II

Louis Zamperini died this year. HE was 97 years old. My buddy Don was able to see him speak at his church before he passed away. What man could forgive his torturer and tormentor after having spent some very miserable years in a prison camp? Louis Zamperini did.

Who was Louis Zamperini? Some might not know. But I believe that will change once the movie Unbroken comes out for Christmas 2014. Lauren Hilldebrand, who wrote the excellent book Seabiscuit took to writing his biography and I believe his story will truly inspire a new generation of kids. Her book on him became a New York Times bestseller. The book spent more than 180 weeks on the New York Times bestseller list in hardcover, fifteen at number one, and counting. Tranquillo told me it was one of his top ten favorite books. I included it in our Spotter Up book list. The movie could be very good. The story it covers is profoundly sad and yet liberating and refreshing.

Here’s a nice opening summary of his story:

On a May afternoon in 1943, an Army Air Forces bomber crashed into the Pacific Ocean and disappeared, leaving only a spray of debris and a slick of oil, gasoline, and blood.  Then, on the ocean surface, a face appeared. It was that of a young lieutenant, the plane’s bombardier, who was struggling to a life raft and pulling himself aboard.  So began one of the most extraordinary odysseys of the Second World War.

Zamperini could only  be described as a scrappy, cunning, scamp and a delinquent. Those who knew him called him a pain in the neck. He spent his time hopping freight trains and skipping school. The Torrance, California  Police Chief said he was so quick on his feet that he used to steal alcohol from bootleggers and outrun them. The teen phenom set a new world record for the high school mile. The second time he ran the 5,00meters he qualified for the Olympics in Berlin and he wasn’t but 17.

He turned his bad behavior into running and running quickly brought him straight into super-stardom and the 1936 Summer Olympics in Berlin. The crowd went wild over his blazing 56 second last lap in the 5,000 meters. Simply incredible, even though he came in 8th place in the event. Good ol’ Adoph Hitler wanted to use the event to show the superiority of the Aryan Race, but even Hitler praised Zamperini’s 56 second blast through time and space. Louis stated decades later:

“All I want to tell young people is that you’re not going to be anything in life unless you learn to commit to a goal. You have to reach deep within yourself to see if you are willing to make the sacrifices.”

― Louis Zamperini, Devil at My Heels: A Heroic Olympian’s Astonishing Story of Survival as a Japanese POW in World War II 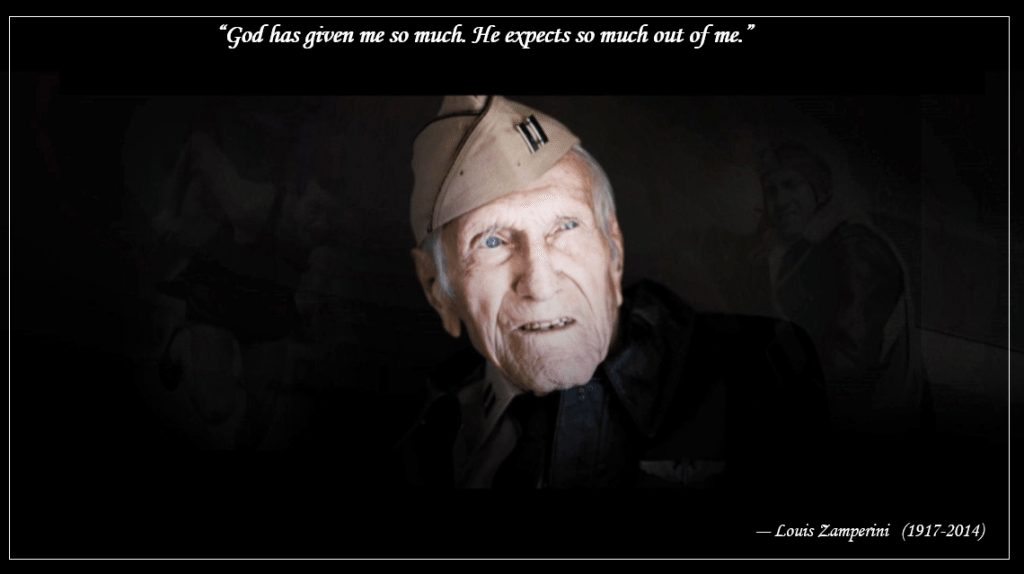 A quick check on YouTube will turn up a black and white video of a scrappy high-school kid running in step with World Record-Holder Don Latch. They run the last 100 meters stride for stride and tie for first. He was 19 years old during this achievement and the Torrance police cheered. The story goes that once in Germany, Louis wanted a souvenir and so he climbed 50 feet up a flag pole in order to retrieve a flag with the Swastika symbol on it. Upon obtaining the flag, the German guards told him to stop, but Louis did what he knew best, he ran.

Louis states in the video that he heard a noise. Perhaps it was a gun shot. He wasn’t sure. He heard a voice say halt and he halted. The rascally kid was actually able to keep the flag and then went on to race the 5000 meters in front of 100,000 people. Zamperini thought he’d get the chance to try again at the 1940 Olympics in Japan but he would not get the chance. War started and Zamperini enlisted in the Air Corps where he became a 2nd Lt. flying a B-24 as a bombardier. From there his life will change forever. 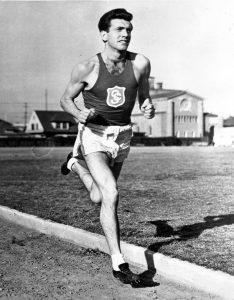 The plane they are given to fly is big, heavy and unwieldy. Some called it the flying coffin. To make matters worse, they are given a plane that no one wants to fly and that no one trusts; it’s called the Green Hornet. It has been cannibalized for parts and now they have to use this patched-together plane.

Louis Zamperini flew his second-hand plane with a crew of 10 and they went searching for a missing B-25. They fly at a thousand feet and only two of his four motors are working. This is not good. The pilot tries to fly the plane low to the water but she isn’t built for maneuvering. As they inch closer to the ocean, the nose and left wing of the plane hits the water and does a cartwheel. Zamperini states in the video that he felt as if someone hit him in the head with a baseball bat. Everyone on the left side of the plane is dead. Louis believes he must have reached a depth of seventy feet before surfacing. Three survivors of the original 11 man crew fix two yellow life rafts together and hope to be discovered. But will they?

In the middle of 65 million square miles of ocean they hear a plane approaching…..

But they will not be discovered by the search party that is out looking for them. Instead they will have to endure weeks adrift in rough waters and survive by eating captured fish and birds. They will endure machine-gun fire from low flying Japanese planes and shark attacks. One of the crew members will die 33 days into their horrible journey. 47 days into the ordeal a Japanese patrol boat will pick the remaining two men up. They will be beaten, neglected and starved over a period of years. The brutality is hard for many men to bear.

In the Tokyo Zoo the Japanese keep a naked American man in a pen for visitors to gawk at. Zamperini, in his own captivity will have a spirit that is unbroken.

Zamperini and his mate Phillips will eventually make their way home to America but the war is not over for either. Zamperini will become an alcoholic, unable to cope with his PTSD. But this is where his story continues to get interesting. In 1949 he will attend a Billy Graham Crusade and become a born-again Christian.

Zamperini will go on to become a motivational speaker and even forgive the men who tortured him. Stating that he lived a full life would be an understatement about him. But it is not because he experienced many incredible events that made him amazing, it is because he lived with an incredible spirit.

“I think the hardest thing in life is to forgive. Hate is self destructive. If you hate somebody, you’re not hurting the person you hate, you’re hurting yourself. It’s a healing, actually, it’s a real healing…forgiveness.”
― Louis Zamperini