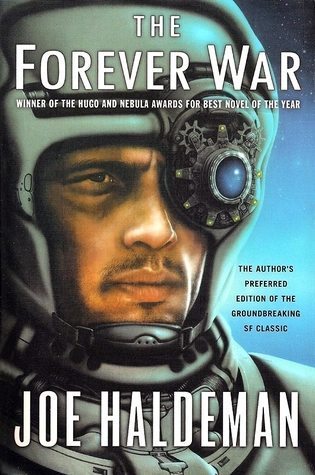 The Forever War (TFW) story takes place light-years in the future and essentially draws on the author Joe Haldeman’s military experience during the Vietnam War. Haldeman wrote about his culture shock and the alienation he felt upon returning stateside after time spent in the jungle. Many veterans today, after serving in Iraq or Afghanistan, are likely able to relate to Haldeman’s sentiments.

Haldeman noted in the foreword to TFW that it is, “mainly about war, about soldiers and about the reasons we think we need them.” I read it forty years ago in ’74 and it is still as prescient a novel today as it was back then.

Haldeman approached more than a dozen different publishers before finding one that was interested in publishing his book. His ground breaking space-opera novel, written in 1974, is about a young soldier’s conscription into military service during a war against an alien species the humans name Taurans.  Though large portions of the story had been cut out before publication it went on to win the Hugo and Nebula Awards.

The book begins by telling the story of a conflict between the alien Taurans and humanity. This conflict arose due to a misunderstanding created when humans used instantaneous star travel to cross vast distances. This time travel has time-warping effects on our hero William Mandella. (the name Mandella is an anagram of Haldeman’s name). The soldiers will skip through years and decades while experiencing just days or weeks through time dilation and relativity. Mandella will have aged just one year normally yet 27 years will have passed between his first military draft and his homecoming. As the centuries pass Mandella chooses to reenlist as he shuttles from battle to battle because he realizes that he cannot adjust to Earth after being away from home for so long.

Mandella rises through the ranks and becomes a high ranking leader of soldiers. As he continues to reenlist the world goes under further changes and becomes more alien. I recall a story I read in the Vietnam war book Bloods where a solider recounts how he was fighting in the jungles of ‘Nam one minute and was stateside two days later. After a tough year-long rotation he found himself wandering around a big city American without an explanation to what he experienced or a veteran outreach program for reintegration. Culture shock isn’t the only thing that affects service members. It has been said that, “War ages you.”  Though he will have aged only a decade Mandella will have existed for nearly twelve centuries.

Back pay and compound interest have made Mandella a billionaire but in the world of the future many of Earth’s customs have changed. In order to control the population society has adopted selective breeding, eugenics and homosexual relationships. All of this is encouraged by the world’s nations. Mandella’s mother has become a lesbian. Mandela’s lover Marygay is a heterosexual soldier. Marygay fights in the same war as Mandella but serves on a different front from him. They each use time dilation to slow their ages down in the hope they will one day reunite to stay permanently connected. Their attempt to reunite may prove fruitless.

Overpopulation which created rationing on Earth has also created massive class wars. He and his fellow soldiers have difficulty fitting into a society that has evolved almost beyond their comprehension. The world is too violent, extremely destructive weapons are too easily obtainable, and few understand what Mandella has gone through.

Unemployment is rampant in the future. All of these things cause Mandella greater culture shock and a feeling that he doesn’t belong. He becomes the oldest survivor of the war. His senior staff and subordinates cannot comprehend his heterosexuality. Mandella commands soldiers who are exclusively homosexual and this further compounds his feeling of alienation.  They resent him because they must learn a 21st century English to communicate with him and he barely understands them.

Humanity has taken another extreme step by cloning itself. This new collective species is simply called Man. They are able to communicate with the Taurans. It is here in the novel where it is discovered that the thousand year long war started due to a misunderstanding. The book ends its story in the year 3148. Just in case the evolutionary change the world created is a mistake Man established colonies of heterosexual humans. Mandela settles in one of the colonies and finally reunites with Marygay. The couple end up having one child.

Haldeman’s book is a strong metaphor for his Vietnam experience. There are many ideas in TFW that are relatable to our own current day and human condition; culture shock, alienation, class wars, unemployment, military service and obligation, homosexuality in the military, wars controlled by a political structure that gobbles up it troops and uses them as machinery to fight its battles without taking responsibility for it, distance from loved ones due to deployment, loneliness and depression.

Ridley Scott did a massive revisionist spin on the movie Kingdom of Heaven. The Forever War may turn out to be a very successful movie. It will be interesting to see if he stays loyal to the book material or if he will pander to Hollywood as he normally does by injecting his political agenda.