Skip to content
Tulsa, Okla. (September 2022) – Adept Armor, an armor system engineering firm, has just released new side plates to complete the Storm System of body armor. The Storm System: Foundation Side Plates are modular, stackable 6 x 6” single-curved side plates that are adaptable to different threat levels via the use of removable strike-faces. These R400 single curve side plates are designed to be worn alongside the Adept Armor torso plates. They are made from structured UHMWPE fiber composite, stiffened foam with a water-resistant nylon cover.
Though it’s often said that side plates are bulky and uncomfortable to wear, the new Storm System: Foundation Side Plates, available today, are ultralight at just 0.85 pounds and thin at 0.9.” Rated NIJ Level III, the side plates feel effortless to wear, yet offer considerable protection from rifle threats, including:
Though these Storm System: Foundation Side Plates are not rated for 5.56x45mm M855/SS109, they are Storm System plates, which means that they are designed for compatibility with a range of forthcoming modular strike faces, which will bring the plate to Level IV and potentially even beyond. It is compatible with all carriers that accept 6 x 6” side plates. If a carrier does not accept side plates but has a MOLLE cummerbund, the new Adept Armor Dragoon Side Plate Pouches will work well. MSRP $152.00. 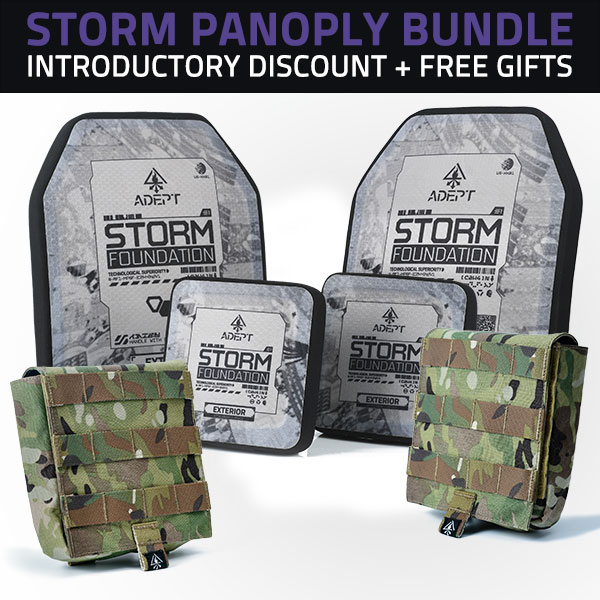 Alongside the Storm System: Foundation Side Plates, Adept Armor is also releasing its new Dragoon™ Plate Carrier, a lightweight plate carrier designed to truly maximize versatility. It can comfortably be used overtly or covertly, can securely and properly fit a huge variety of armor plate systems, and is compatible with the widest range of accessories.
When it comes to plate carriers, there are typically two types: covert and overt. The covert carriers can be concealed under clothing, but have an extremely limited feature set, while the overt carriers, which are fully-featured and much more robust, are at the same time unavoidably bulky. The Dragoon Plate Carrier bridges the gap between both plate carrier types and offers the best of both worlds. Inspired by its namesakes – the light mounted infantrymen of the early modern period, who, in their role as skirmishers, scouts, ambushers, and raiders, were forced to strike a delicate balance between firepower and extreme mobility – the Dragoon is a lightweight and ultra-low-profile plate carrier, yet one which is nevertheless fully configurable and comes with every bell and whistle one would expect of an overt carrier. 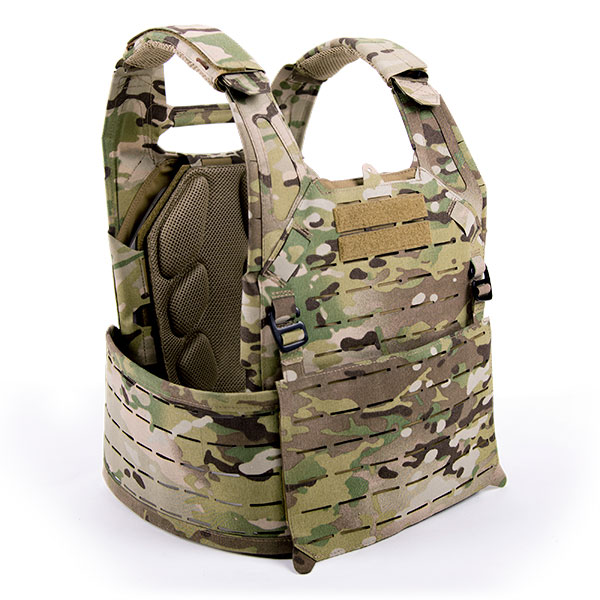 As a covert carrier, the Dragoon excels. It is exceptionally thin, has slick and low-profile surfaces, features removable high-density padding rather than bulky integral padding, and has no buckles or quick-release mechanisms that can print or get snagged under clothing. It securely fits very thin plates, such as the 0.2” Storm Titanium. It is also IR-treated, lightweight, and extremely hydrophobic so its wet weight is almost identical to its dry weight.
As an overt carrier, the Dragoon performs just as well. It was designed to be effective as a platform of rugged and durable construction. With tough materials, top-tier workmanship and stitching, a hidden admin pouch, cable guides, and low-profile laser-cut MOLLE on just about every surface, the Dragoon can be configured to meet the specific requirements of any mission.
The Dragoon Plate Carrier fits bulky plates just as well as it carries thin, low-profile armor plates, for its plate pockets are extremely adaptable. It is suitable for use with plates that run the size gamut from SAPI S to SAPI L, including 10 x 12” plates that don’t correspond to a SAPI side, shooter’s cut plates, and swimmer’s cut plates. This includes plates of virtually any thickness, up to and including 1.5.” It works exceptionally well with the Adept Armor Storm System, as it is capable of fitting the Foundation, an up-armor plate, and an additional trauma pad. 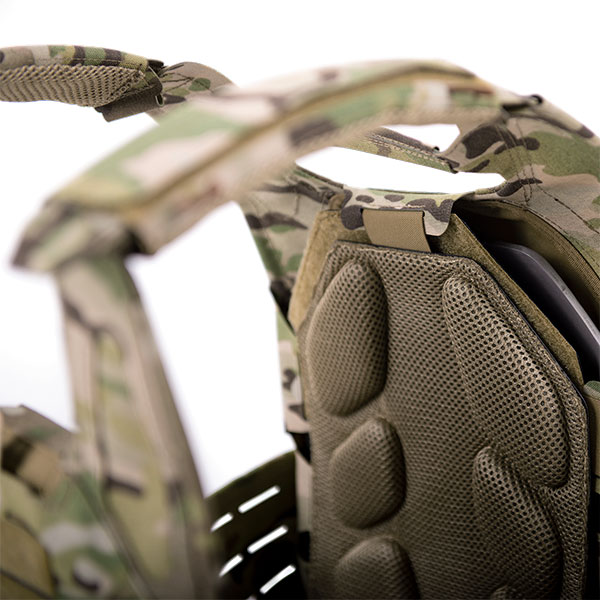 Made in Bohemia, Czechia, the Dragoon Plate Carrier is made from European and American Materials with durable 500D Cordura construction. It features comfortable, lightly padded shoulder straps with hydration/cable pass-through and a Velcro panel on the outer surface for mounting IR identifiers, patches, and additional placards. It is lightweight at just over 1.5 pounds when fully configured with the cummerbund. MSRP $220.00. 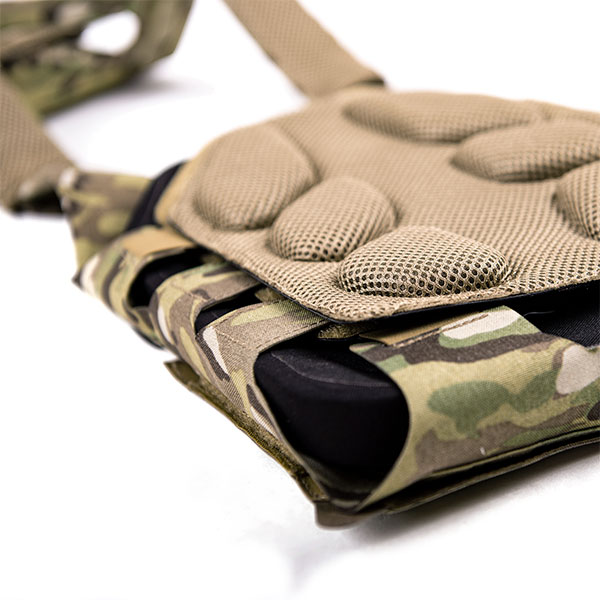 In keeping with the modularity and versatility which were heavily prioritized in the design of these products, the Dragoon Side Plate Pouches are removable and fit all plate carriers comfortably and securely with a MOLLE cummerbund. Like the Dragoon Plate Carrier itself, these Side Plate Pouches are rugged, lightweight, IR compliant, and versatile. They contain no unnecessary padding and were designed for hard use and sleekness of form. As they were designed for use with the Storm System: Foundation Side Plates, alone or stacked, they’re capable of containing side plates anywhere from 0.2” through 1.33” thick. They can also be used with non-ballistic training plates of greater weight than typical side plates. These 6 x 6” side plate pouches, paired with the right set of plates, significantly increase protection from small arms threats. MSRP $64.00.
Adept Armor is celebrating the launch of these three new products by offering a promotional bundle at a discounted price. This bundle will include two Storm System: Foundation Torso Plates, two Storm System: Foundation Side Plates, and two Dragoon Side Plate Pouches. This limited-edition bundle is worth $859.00 and can be purchased here: https://www.adeptarmor.com/product/storm-foundation-panoply/ 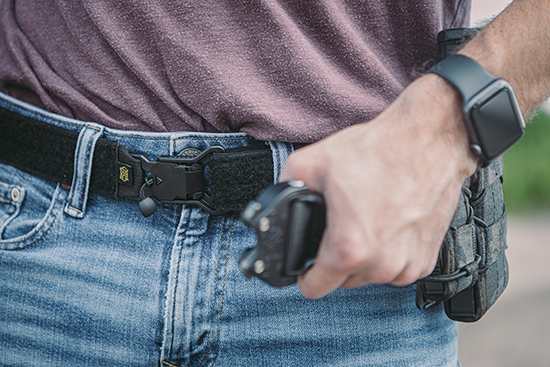