Dry fire practice is an incredibly useful tool for improving gun handling, trigger press, aiming and other related skills. It is one of the best, and cheapest, ways to become a better shooter. One of the down sides is the lack of feedback that you do get from live fire. Enter Hits Arms and their training laser bullets. Hits Arms currently sells their laser training bullets in 9mm and 380 acp, though in the past they have also advertised versions in .223, 7.62×39 and 30-06 among others.

I selected the 9mm version, which has a listed MSRP $85 but is on sale on Hits Arms website for $55. It comes with the required batteries and has the exact dimensions and look and feel of a real 9mm round. In fact, it looks so much like a live round, that it is disconcerting. But more on that later.

As you may be aware, dry fire practice requires special precautions to mitigate risks. Select a consistent dry fire practice area and follow the same process every time. Keep your weapon pointed in a safe direction and know what is beyond your backstop and target. Ensure the weapon is clear (no round in the chamber) and no rounds in the magazine. Then double-check it. I recommend ensuring that you never allow live ammo in the same space you use for dry fire training.

Once you are ready to dry fire, load the Hits Arms laser training round into the magazine like you would any other round. Release the slide to chamber the training round. You can also drop the round directly into the chamber. I did find that if I eased the slide forward, the round would not always seat properly, thus preventing the firearm from returning to battery. That issue did not happen if I released the slide normally. Once you chamber the training round, aim and press the trigger as you normally would. When the firing pin strikes the switch, the laser is turn on and provides a brief visual feedback for your point of impact. 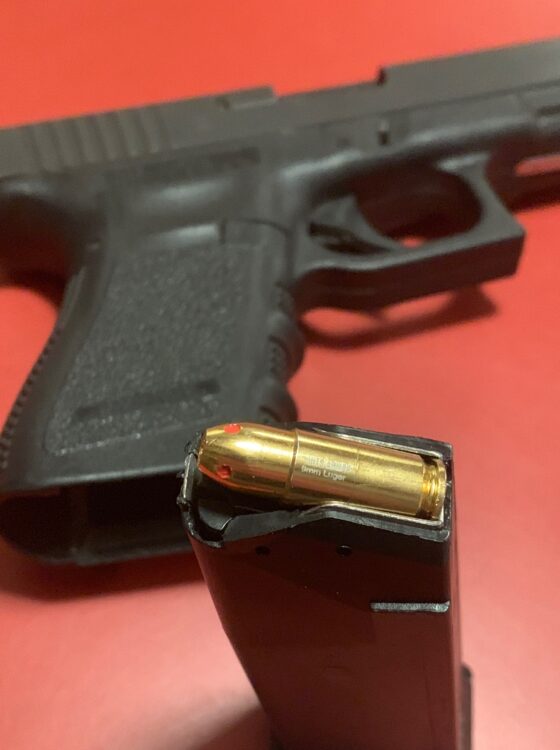 I tested the laser bullet in multiple firearms, including a Glock 19, a SIG 229, a Browning Hi Power and a SIG MPX. In each case the laser round functioned without fail. It did not like each weapon equally though. Each weapon seemed to present a slightly different point of impact (POI) relative to the point of aim (POA). Some of the different pictures are below. Additionally, if I rotated the round in the magazine, I could also get some variation in POI. Most of my testing was at 3 yards or less, so any variation was minimal. But as Hits Arms advertises the lasers are good out to 200 yards at night, that small variation is going to be significantly amplified (see what I did there? We are talking about lasers after all). There is no way to zero or tune the laser to match your POA for your weapon. 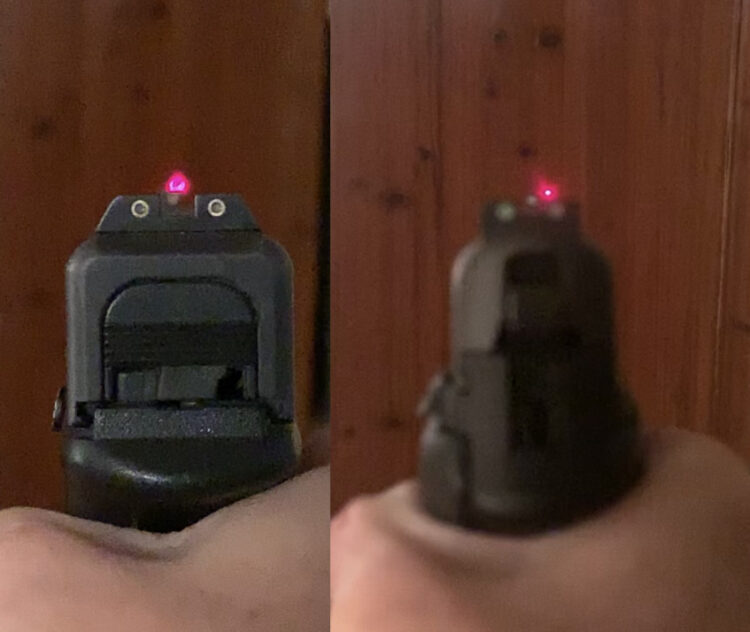 Of the systems, I tested it with; the POI differed most from POA with the MPX. I found my G19 like it best, with the POI being closest to the POA. On note, when using a Glock or other striker-fired pistol, you will need to reset the trigger between dry fire shots. The easiest way to do this is the rack the slide halfway to re-cycle the firing pin. In double or single action pistols, you will manipulate the hammer/trigger as normal.

When I asked the company about the differences between the POA and POI, they responded with:

I shoot all these guns regularly (and accurately) so neither of these fully satisfied me. More exploration is warranted. I have marked the round in quadrants and am testing the variations more rigorously.

Feedback is instant, but also disappears. This creates a risk of training yourself to take your eye off the front sight to look for the laser (esp when the POI and POA vary widely). It would be nice if the laser would stay on for a period of time. Shooter follow through may suffer if they keep looking from the sight to the target. There are apps that will record your shots though so that you can review the target later. I have not tested them yet, but plan to do so later 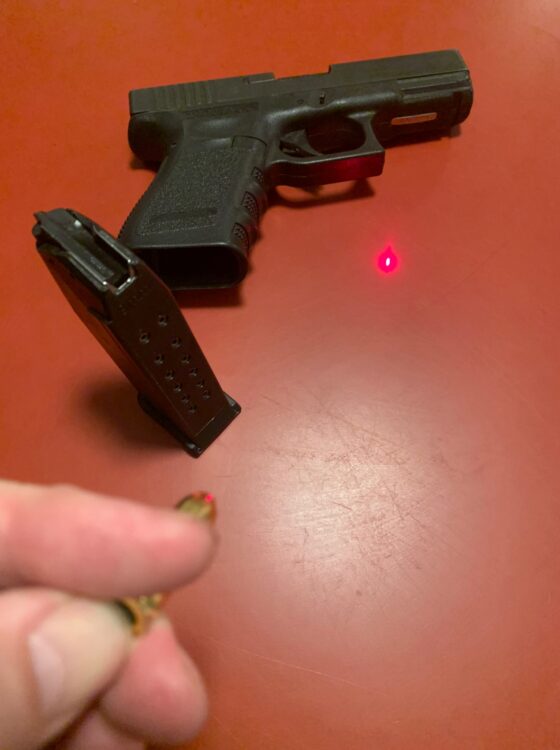 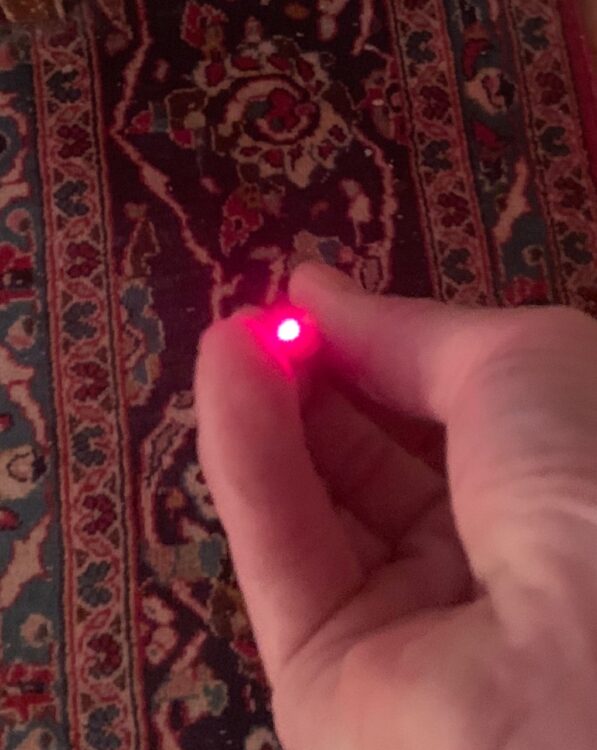 One concern I have about the product is that it largely looks like a live round. Traditional snap caps are usually a different color (and weight) so that you would never mistake one for a live round. This could easily be mistaken for a live round and thus, loaded in a live mag, fail to go boom when you might need it to. More worrisome to me is that someone could load a live round, thinking it was the laser, and thus have an ND. Diligence in your dry fire practice habits should prevent this, but nonetheless the risk is there. 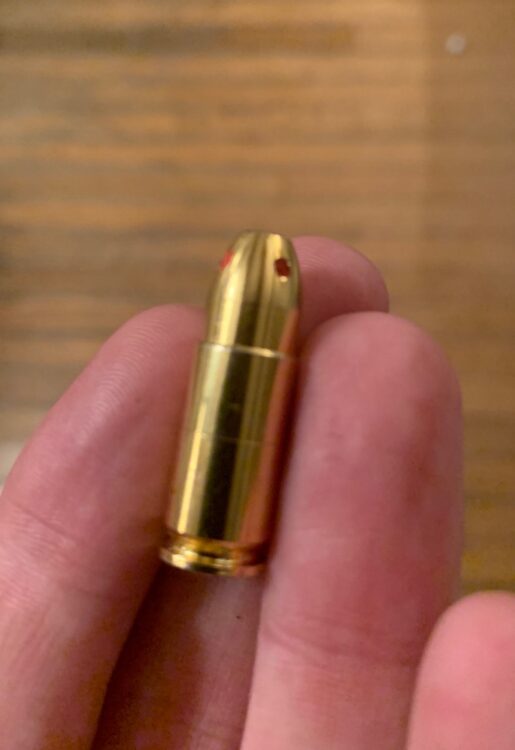 More from the vendor

Hits Arms has tested the Laser Bullet to work to 5,000 shots, and states that some units have tested far beyond 10,000 shots. They recommend that you do not expose it to extreme temperatures, heavy impacts or fall drops on the floor. When you finish dry firing, eject directly on top of a surface to prevent any internal damages due to high impacts. Additionally, if you do not intend to use the laser round for an extended period of time, they recommend removing the batteries. 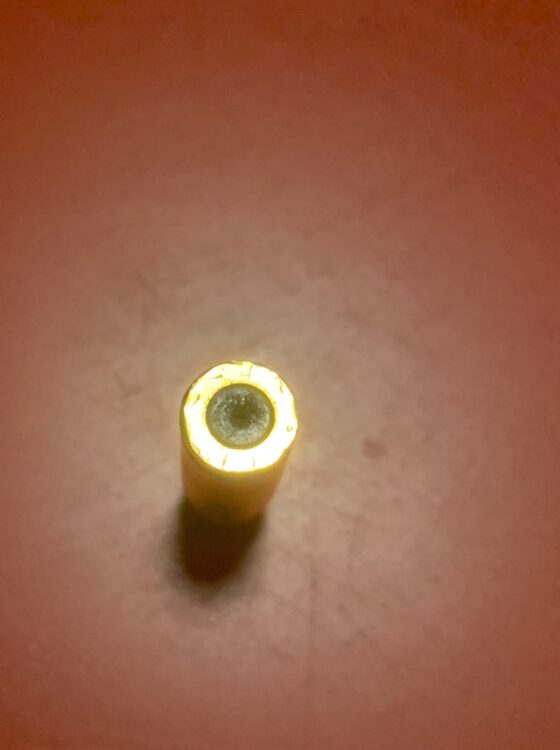 I think the product is a good idea. If it runs well in your platform, it can be a useful training aid. My hope is we will continue see product development from Hits Arms based on feedback from this and other reviewers. I will continue to use it in my G19 and will benefit from it. I wish it ran as well in the other platforms I use.